The countdown clock to our Europe trip is ticking pretty loud right now. I am both very excited and just about as scared and stressed out as I can be. I have never been to Europe and just the thought of such a long flight and trip is enough to send me over the edge. I feel like I am getting ready for a big test. What to bring, what I can’t bring, and how much to bring. The only thing I am not stressed out about is who is taking care of my fur babies. Junebug will be with her best friend Winnie the Poodle, and Sinny will be at home being cared for by my neighbor. Junebug will also be able to hangout with Sinny often since Winnie is just two house down. So if I just think about the fact that the most important things are taken care of and will be happy, the rest should be just fine. 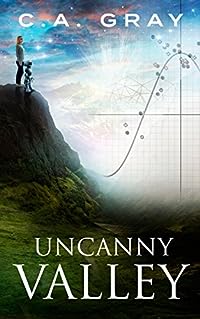 Rebecca Cordeaux knows exactly what her future will hold: she will marry Andy, her crush of the last five years. Once Andy is ready to settle down, she’s sure he will discover that she is his soulmate. After several small parts on stage, Rebecca knows she can become a renowned actress. Her writing also shows promise as a future author. Robots perform most human jobs that can be automated, leaving many free to pursue their personal creative interests.

But Rebecca’s mother Karen fears the new world of robots, and insists her brilliant daughter join a university research team, studying the hazards of a complete robotic economy. Rebecca’s father Quentin was obsessed with the subject to a degree that even her mother considered absurd, prior to his untimely death. So long as she can reserve enough of her time to pursue her true passions on the side, Rebecca half-heartedly agrees to join the research team, if only to please her widowed mother. There she joins a post-doc named Liam, whose conspiracy theories rival even those of her late father. Liam is convinced that world Republic leader William Halpert’s worldwide challenge for researchers to develop synthetic creativity will lead not to the promised utopia, in which every kind of human suffering has been eradicated, but rather to an apocalypse. Rebecca, whose best friend is her own companion bot Madeline, writes Liam off as a bot-hating conspiracy theorist, just like her father was… until she learns that her father’s death might not have been due to mere happenstance.

With Liam’s help, Rebecca learns of an underground organization known as The Renegades, where Quentin Cordeaux was considered a legend. While Liam attempts to stop Halpert’s challenge if he can, Rebecca tries to unravel the mystery of what happened to her father. Did he and many of his contemporaries die for something they knew? Who is the mysterious informant who calls himself John Doe, and only seems to want to drive her out of harm’s way? And if Halpert’s challenge is answered, will it usher in a brave new chapter in humanity’s history… or were Quentin Cordeaux’s dire predictions right all along? 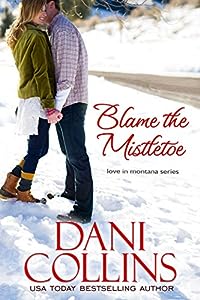 Blame the Mistletoe (Love in Montana Book 2)
by Dani Collins

Liz Flowers has never enjoyed Christmas, but this one is shaping up to be the worst by far. She let her ex take her daughter to Mexico while she stays behind in a strange town, sitting her former mother-in-law’s high strung little dog. It’s an opportunity to meet new people, but this California girl doesn’t have much in common with the ranchers in small town Marietta.

Blake Canon perks up with male interest when he sees a new face at his friend’s Christmas cocktail party. His son is away and a light affair would take his mind off his financial troubles. Then he realizes he knows Liz. She was once married to the brother of his ex-wife.

Their children might be cousins, but Blake and Liz do the kissing — under the mistletoe. It’s the beginning of a new view of Christmas for Liz, but when their children arrive home unexpectedly, and family secrets are revealed, Liz isn’t sure she’ll stay in Marietta for Christmas after all. 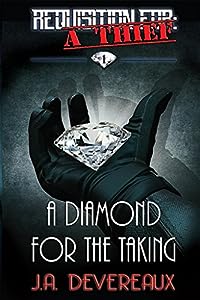 Requisition For: A Thief ~ Book 1 ~: A Diamond for the Taking
by J. A. Devereaux

HE’S A THIEF, NOT A BAD GUY… PULLING THE HEIST THAT WILL CHANGE HIS LIFE.

International jewel thief Gregg Hadyn is stealing diamonds, and he can’t be caught. But when Gregg “accidentally” kidnaps covert espionage operative Carly Macklin during a heist, he finds that he escapes with more than he bargained for.

As Gregg wrestles with attraction for Carly versus a career that puts them squarely at odds, Denny Garret, the former FBI agent who chased Gregg unsuccessfully for twelve years — and now Carly’s boss — renews his commitment to apprehend the notorious thief.

Caught in the crosshairs of Denny’s pursuit, Gregg matches wits with his nemesis in a real-life chess game. The winner will decide Gregg’s destiny. Will he continue his illustrious criminal career? Might he get caught and go to jail? Or… could there be another, totally unforeseen, option? 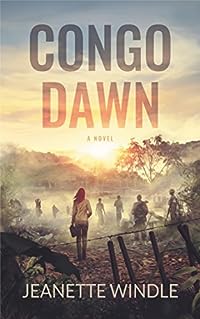 The smallest flame shines brightest against the darkest night.

If absolute power breeds absolute corruption, what happens when a multinational corporation with unlimited funds hires on a private military company with unbridled power, especially in a war-torn African nation where any governmental accountability is for sale at only too cheap a price?

While former Marine lieutenant Robin Duncan is no stranger to corruption or conspiracy, she has always been able to tell the good guys from the bad. At first, her current assignment is no different: working on behalf of an international corporation to insurgent killer. But as a ruthless global conspiracy begins to surface, run by powerful men who can’t afford to leave witnesses, Robin doesn’t know who to trust. Nor can she see any way to save the Ituri rainforest villagers she has sworn to protect. Why is God silent amid all the pain and injustice? And how do these people of faith continue to rejoice in their suffering?

ABOUT THE AUTHOR: As a child of missionary parents, award-winning author and journalist JEANETTE WINDLE grew up in equatorial South America’s guerilla hot zones, has lived in six countries, and traveled in more than thirty. Her detailed research and writing is so realistic that it has prompted government agencies to question her to determine if she has received classified information. Such experiences have birthed more than twenty fiction and non-fiction titles, including award-winning novels Veiled Freedom, Freedom’s Stand, and political suspense bestseller CrossFire. 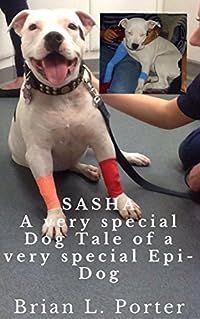 SASHA is the story of a very remarkable dog: a Staffordshire Bull Terrier abandoned close to death at the age of 6 weeks old. Rescued from a street gutter, she had the good fortune to be adopted by author Brian L. Porter and his family.

Despite suffering from a catalogue of injuries, including two broken legs and skin allergies, and eventually being diagnosed as a serious epileptic at just two years old, Sasha’s story is one of triumph over adversity; of love, happiness and inspiration. Her love of life and capacity for enjoying every day to the fullest is nothing short of miraculous, and her story is told here by the person who shares every moment of her life on a daily basis, and how a disabled author and his dog have become dependent on each other.

It is a story that has already touched many who have come into contact with her, from vets to nurses and a whole host of followers on her own Facebook page. Read her story and join them in sharing in the life of an amazing and very special dog!