Full of action and international intrigue, Charlotte Larsen’s intense thriller is also an examination of significant moral dilemmas including whether the end justifies the means, personal gain versus the greater good, and the righteousness of vigilante justice. An unusual mix of business, action, existential themes, and meditation. If you like a passionate heroine, spine-chilling suspense, and a fight for what is right, then you’ll love Charlotte Larsen’s fast-paced thriller. Enjoy! 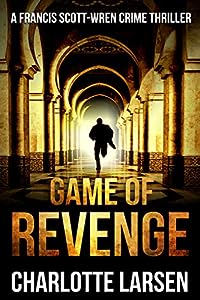 In 1944 a snitch denounced a couple and their eldest son for resistance activities. The mother was separated from her husband and son and sent to Bergen-Belsen. The husband and son sent to Dachau. None of them returned.

Years later, their grandson, James takes on a revenging role towards the affluent descendants of the snitch. One by one he takes them down.

But along the way, Francis Scott-Wren picks up the scent and sends in his agent Jo Vermeer to stop the destructive rampage of James.
However, the relationship between her and her target brings her a dilemma of loyalty, that unstable her significantly.

As we travel with the characters through Copenhagen, Marrakesh and into a jungle monastery in Sri Lanka, we must ask ourselves: What are our true values? And how far will we go to defend them? 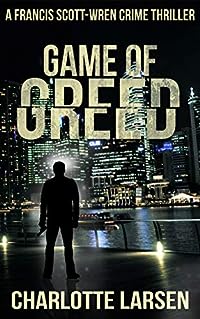 On the surface Francis Scott-Wren appears like any other rich socialite – tailored suits, old world charm and significant wealth. A man born to privilege. But what only a very few know, is that Scott-Wren has a secret: he uses his wealth and influence to rid the world of greed and selfishness.

Now he has his sights on ruthless power broker George Schwartz, who directs Schwartz Inc. as a vehicle of personal profit and vengeance. Backed by his squad of highly trained agents, including his loyal sidekicks Dhammakarati, a Buddhist monk, and the anti-social female agent Jo, Scott-Wren and his team set off on a collision course with Schwartz that will leave some dead and others exposed.

As the action travels from five-star hotels via Buddhist monasteries to the hallowed halls of the world’s most powerful players, Scott-Wren engages Schwartz in a fierce battle of wits that exposes disturbing similarities between himself and his prey. What remains to be seen is whether they really are so different and how far Scott-Wren is willing to go for victory.