When The Price Dropped, everyone grabbed a penguin. 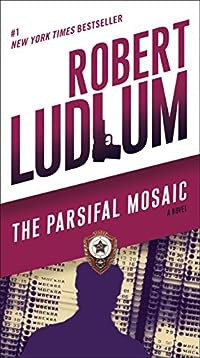 The Parsifal Mosaic: A Novel
by Robert Ludlum

Michael Havelock’s world died on a moonlit beach on the Costa Brava as he watched his partner and lover, double agent Jenna Karas, efficiently gunned down by his own agency. There’s nothing left for him but to quit the game, get out. Then, in one frantic moment on a crowded railroad platform in Rome, Havelock sees Jenna. Racing around the globe in search of his beautiful betrayer, Havelock is now marked for death by both U.S. and Russian assassins, trapped in a massive mosaic of treachery created by a top-level mole with the world in his fist: Parsifal. 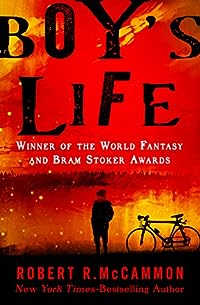 An Alabama boy’s innocence is shaken by murder and madness in the 1960s South in this novel by the New York Times-bestselling author of Swan Song.

It’s 1964 in idyllic Zephyr, Alabama. People either work for the paper mill up the Tecumseh River, or for the local dairy. It’s a simple life, but it stirs the impressionable imagination of twelve-year-old aspiring writer Cory Mackenson. He’s certain he’s sensed spirits whispering in the churchyard. He’s heard of the weird bootleggers who lurk in the dark outside of town. He’s seen a flood leave Main Street crawling with snakes. Cory thrills to all of it as only a young boy can.

Then one morning, while accompanying his father on his milk route, he sees a car careen off the road and slowly sink into fathomless Saxon’s Lake. His father dives into the icy water to rescue the driver, and finds a beaten corpse, naked and handcuffed to the steering wheel — a copper wire tightened around the stranger’s neck. In time, the townsfolk seem to forget all about the unsolved murder. But Cory and his father can’t.

Their search for the truth is a journey into a world where innocence and evil collide. What lies before them is the stuff of fear and awe, magic and madness, fantasy and reality. As Cory wades into the deep end of Zephyr and all its mysteries, he’ll discover that while the pleasures of childish things fade away, growing up can be a strange and beautiful ride. 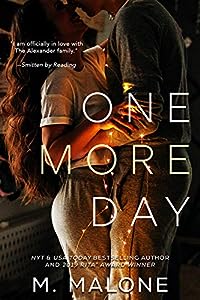 One More Day (The Alexanders Book 1)
by M. Malone

Ridley attracts nothing but bad guys. Like “won’t stop calling and then shows up in the bushes outside your house” type of guys.

So when she’s confused for her twin while hiding out from her latest mistake, for once she decides to do the “wrong” thing.

Being talented isn’t all it’s cracked up to be…

Jackson Alexander was born with the voice of an angel. But after his wife’s death, he lost his will to sing. Or to love. Now he’s a single-dad just trying to raise his sons on his own.

There’s something about Ri that makes him want to try again. But when her lies are revealed, he has to make a choice. Trust her or his heart which just might break for good this time.

– – This is a full-length, stand-alone novel. No cliffhangers, no cheating & HEA guaranteed! 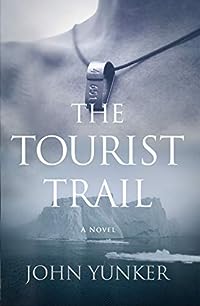 The Tourist Trail: A Novel (Across Oceans Book 1)
by John Yunker

Biologist Angela Haynes is accustomed to dark, lonely nights as one of the few humans at a penguin research station in Patagonia. She has grown used to the cries of penguins before dawn, to meager supplies and housing, to spending most of her days in one of the most remote regions on earth. What she isn’t used to is strange men washing ashore, which happens one day on her watch.

The man won’t tell her his name or where he came from, but Angela, who has a soft spot for strays, tends to him, if for no other reason than to protect her birds and her work. When she later learns why he goes by an alias, why he is a refugee from the law, and why he is a man without a port, she begins to fall in love — and embarks on a journey that takes her deep into Antarctic waters, and even deeper into the emotional territory she thought she’d left behind.

Against the backdrop of the Southern Ocean, The Tourist Trail weaves together the stories of Angela as well as FBI agent Robert Porter, dispatched on a mission that unearths a past he would rather keep buried; and Ethan Downes, a computer tech whose love for a passionate activist draws him into a dangerous mission. 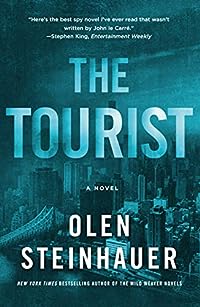 The Tourist: A Novel (Milo Weaver Book 1)
by Olen Steinhauer

Milo Weaver used to be a “tourist” for the CIA — an undercover agent with no home, no identity — but he’s since retired from the field to become a middle-level manager at the CIA’s New York headquarters. He’s acquired a wife, a daughter, and a brownstone in Brooklyn, and he’s tried to leave his old life of secrets and lies behind. However, when the arrest of a long-sought-after assassin sets off an investigation into one of Milo’s oldest colleagues and exposes new layers of intrigue in his old cases, he has no choice but to go back undercover and find out who’s holding the strings once and for all.