Discover The Sam Rader Thrillers by Simon King today, and prepare for a heart-pounding ride into a serial killer’s worst nightmare. If you liked Jack Reacher and Dexter, then you will love these gritty and suspenseful crime thrillers. Enjoy!

A brutal killer. A helpless victim. But which one is she?

Samantha Rader always knew she was different. Her morbid fascination with death and murder kept her isolated and alone from the world, growing up with a father who kept them off the grid. An ex-seal, he’s made sure his little girl knows how to protect herself. But Sam’s continuing urge to kill intensifies after witnessing a brutal homicide. Now holding the skill-set to kill and a thirst for blood, the monster inside her is finally unleashed. But it’s not just anybody this killer wants to find. She’s hunting those that prey on the innocent.

A body by a lake. A freshly buried coffin. But which is the murder victim?

When an elderly man is found dead on a bench overlooking Eagle Lake in Maine, Sam finds herself unprepared for the horrific events that soon follow. The authorities eventually identify 74-year old Nathanial Johns, but what they discover leaves more questions than answers. Having been laid to rest over a thousand miles away the previous week, the authorities are stunned to find a fresh corpse in his reburied coffin.

Soon more bodies show up, each replaced with a fresh victim to lie in their stead. But if Sam and the team think this is just a serial killer with a twisted sense of humour, they are about to discover a shocking truth that leads right back to the heart of their own organisation.

Love the excitement of Jack Reacher and the horrific side of Dexter Morgan? Then Samantha Rader is the new kid on the block, here to take you to the dark places the others have only hinted at.

Body Switch is the second book in the Sam Rader Thriller series. Get ready for a marathon read when you buy Body Switch today. 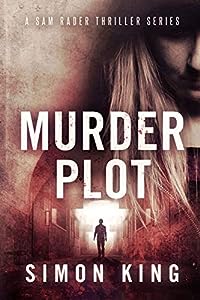 When multiple inmates start turning up dead at a Californian Correctional Facility, a desperate mother pleads for help to save her son. After John Milton steps in, Sam and Tim are assigned to find the culprit. With the team split on either side of the fence, both race against time to discover the true identity of the killer.

As Sam don’s an officer’s uniform and Tim joins the general population, the pair will have to work quickly to save the lives of more innocent victims. With the body count rising and a system struggling to stop the violence, will Sam end another killer, or will he add her partner to his growing list of victims?

Murder Plot is the third book in the Sam Rader thriller series. If you like Jack Reacher, and the darker side of Dexter Morgan, you’ll love this exciting new thriller series.

Buy Murder Plot now and experience the darker side of psychological thrillers.