THE PROJECT RM NOVELS by Peter A. Schoemann

The Storm killed billions. To reset humanity’s future, these teens must uncover the truth and risk everything — including humanity’s existence. 17 years after billions died, the few hundred remaining live in peace and harmony. Life is especially good for Matthew Cane. His two trusted friends, Rich and Bobby, are more like brothers and his pretty girlfriend, Lori, would do anything for him. For Matthew, everything is neat and in place, the perfect life — well, as perfect as possible growing up without his mother and most of humanity gone.

In one day, however, two women jolt him out of his teenage concerns and into something much greater. His dead mother gives a mission to reset humanity’s future; then an unexpected beauty provides the spark. Will Matt risk everything for the chance to save billions, including his mother?

Get Project Renaissance Man volume 1 with just one click!

In the right place at the wrong time.

Narrowly escaping from 2037, Matt awakens in limbo — he didn’t travel far enough into the past. The Storm has already happened. He’s caught in the middle, between the dystopia he left and the chaotic pre-Storm world he meant to reach. Worse, so much in this time is different than he expected. It’s as if he’s traveled to an alternate universe.

He has just three weeks — three weeks to set things straight, three weeks to prepare for his next time jump, and three weeks to save his mother’s life. There’s just one huge problem with that last one, a universal problem known as the butterfly effect. He wants to change the future to save her, but he can’t until he jumps the Storm. Otherwise, he may change the future before he’s in place to stop it and save billions; and that might prevent him from reaching the past in the first place. To add to his growing list of issues, anger begins to consume him. Matt fears this is a symptom of something much worse, something he won’t be able to overcome. After all, it’s built into his DNA.

Will Matt be able to overcome his instinct? Can he avoid the butterfly effect, or will he let his mother die all over again? Get your copy of Storm Jumper and find out. 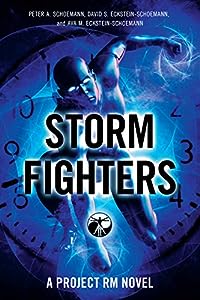 Can he survive long enough to save humanity?

Six days. After months of risking so much and so many precious lives lost, that’s all the time Matt has to save humanity. He’s weakened and unlikely to survive one last time jump, but he’s determined to fulfill his promise to Sophie — he must stop the Storm. Unfortunately, even with Joseph Solomon by his side, that may be impossible. After all, their fighting a formidable opponent, another unexpected one, and the laws of the universe. Will Matt and Joseph find a way or are more than seven billion souls truly lost forever? Get your copy of Storm Fighters and find out.