I poked my head outside to check on the little preying mantis that lives on my front doorstep. Her name is Rebecca. She seems to be doing just fine. I noticed that the rest of the street is pretty quite right now. Usually you would see some sort of action happening. Nothing. I bet everyone is on their couches today. Back to mine! 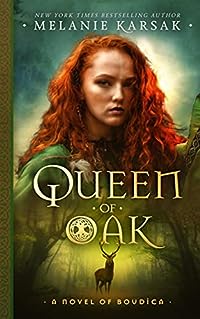 Queen of Oak: A Novel of Boudica (The Celtic Rebels Series Book 1)
by Melanie Karsak

Fated to lead a rebellion against Rome.
Destined to become a legend.

From New York Times bestseller Melanie Karsak, author of the Celtic Blood series, comes a gripping historical fantasy series of ancient Britain, Celtic gods, a fated romance, and the warrior queen who defied Rome.
Britain, A.D. 42 — Boudica, second daughter of a Celtic king, has little concern for tribal tensions and political intrigues. Called by the gods and the stirrings of her own wild heart, she listens instead to whispers of the oaks. But Boudica would be wiser to heed the warning cries of eagles.

Rumors abound that the Romans are amassing forces for another invasion. In an effort to consolidate power, Boudica’s father turns to Prasutagus, the formidable ruler of the Greater Iceni. To win Prasutagus’s aid, Boudica’s father must strike a bargain — a deal with implications beyond Boudica’s imagining. 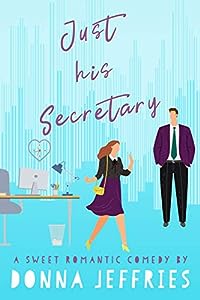 She’s just his secretary… until he needs someone on his arm to convince his mother that he can take over the family business.

Oh, and the romance is clean, the jokes witty, and the office grump swoon-worthy.

Callie:
Dawson Houser makes sure everyone who comes into the office knows I’m “just his secretary.” Heck, I’ve even said it to suppliers and CEOs when they smile knowingly at the two of us during business meetings. He scowls and grumps around the office afterward, as if the two of us dating is the most ridiculous thing on the planet.

Dawson can handle them.

I can handle them — and him too, once they leave. And he’s no picnic, let me tell you.

Who can’t we handle? His mother.

When Lila Houser comes to town with her faux furs and fashion sunglasses, she only has one question for her spoiled rotten son: When are you going to get married, Dawson, darling?

I expect him to laugh and tell her he’s never getting married. I mean, I’ve heard those exact words come out of his mouth. Instead, he pulls me to his side and says, “Maybe sooner than you think, Mother.”

Oh, that Lila Houser can make a woman feel two inches tall with a simple up-down look. I think I’m a pretty good catch… no matter what my last three boyfriends say.

When Lila says, “I thought Callie was just your secretary,” I suddenly want to prove her dead wrong… 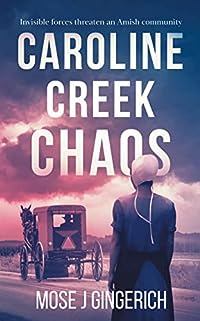 A community is most vulnerable without its leader. When Bishop Mast disappears from the Amish community of Caroline Creek, rumors, gossip, and speculation quickly begin to dominate conversations. That speculation is soon replaced by worry, and then, fear. Someone, or something, is manipulating members within the community — an invisible force, playing God with their lives. Still, steeped in tradition and manmade rules, they try mightily to stay the course. Now, they must elect a new leader to replace the bishop. But even in this simple task, the invisible force intervenes.

Maria Reader, a controversial Amish teen who is perpetually at odds with the ministers, who lives with one foot inside the community and one foot out, is one of the only people asking the tough questions. Maria teams up with Bruce Ellsworth, an English private investigator from the nearby city, and together, they search for the missing bishop. This job is made more difficult because of the manipulative messages that keep arriving in the mailboxes of members — messages that are shameful, hurtful, and that are designed to rouse suspicion and distrust.

The community’s lack of leadership is ultimately their downfall. Caught in a tangled web of deceit, power struggles, and always the invisible force manipulating them, they finally run out of time and members begin to turn on each other. The only real question is, can Maria Reader save them before all is lost? 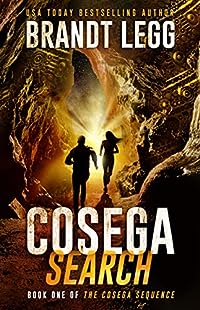 The only thing bigger than his discovery
is the conspiracy to stop it!
Will he unlock the secrets in time?

A brilliant archeologist, with an impossible theory, unearths an extraordinary artifact. It is beyond imagining.

The find unleashes a mystery older than recorded time, rewrites human history, and promises to change the planet’s future.

It must be suppressed.

The most powerful forces in the world align against him.

Who can he trust?

A deadly competition for the artifact ensues. Capturing Gaines is not enough–everyone who has seen it must be killed.

Can he stay alive long enough to decode the Cosega Sequence?

Dig far enough into the past, you may just discover the future. 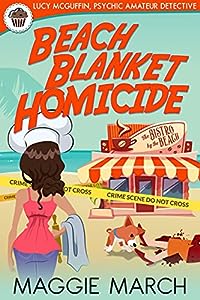 Lucy is a human lie-detector. Her rescue dog Paco is a ghost whisperer. Together, they solve crime in this laugh-out-loud cozy mystery series!

Everyone agrees that Lucy McGuffin bakes the best muffins in Whispering Bay, but she’s got another talent, one that she’s tried her whole life to hide. Lucy can always tell when a person is lying or telling the truth. Being a human lie detector isn’t all that it’s cracked up to be. Especially when you don’t really want the answer to the universal question: Does this dress make my butt look big?

When Lucy is hired to cater the opening celebration of the new community center, she stumbles across the dead body of Abby Delgado, a prominent member of the Sunshine Ghost Society. Lucy’s brother, Father Sebastian, a local priest, was the last person to have seen Abby alive. Convinced he’ll be breaking a confidence, Sebastian refuses to cooperate with the police, forcing Lucy to put her skills to the test to save her brother’s good name.

Enter the town’s hew hotshot deputy, Travis Fontaine. Travis doesn’t want an amateur like Lucy snooping around his turf, so he offers her a deal. He’ll stay out of her kitchen if she’ll stay away from his crime scene. But Lucy isn’t about to let her brother’s fate rest in the hands of an arrogant cop. Good thing she has her best friend Will and her new little rescue dog Paco to back her up, because it’s up to Lucy to figure out what everyone in the quaint little beachside town is hiding.

NOTE: This book was previously published under the name Maria Geraci.

It looked like a simple drug overdose. The truth is much more sinister…

Small town sheriff Jack Lamburt would do almost anything to protect his community. But when he’s faced with a series of daunting problems from multiple disasters that hit his normally quiet little upstate town, even he might be in over his head.

A local marine hero is charged with a war crime, a home invasion leads to murder, and a young mother that he just happens to have a history with dies of a drug overdose. After all clues lead him to a suspected drug lab in a nearby town, his rage knows no bounds and he vows to deliver vengeance the only way he knows how…
Leaving a trail of corpses in his wake, Lamburt uncovers a foreign connection to the crimes as he strides his path of justice. But up against a crooked journalist, the FBI, and diplomatic immunity, the ruthless lawman finds himself ensnared in a web of corruption that jeopardizes the entire country.

Can Lamburt bring his personal brand of carnage to their plans before thousands of innocent lives are lost?

Foreign Justice is the fourth book in the best selling Jack Lamburt Vigilante Justice Thriller series. If you like high-octane page-turners, heroes willing to do what’s necessary, and fighting the good fight, then you’ll love John Etzil’s gritty tale.