[Free eBooks] It’s A sign From The Chicken Gods

I took about 10 million pictures of the chickens I raised so you guys could see an update. Chickens running, chickens giving high -fives, chickens doing King Fu, and chickens running is slow motion. The only picture I could get into this post is a chicken looking at me accusingly. It is like she is trying to send the message that I have a problem with commitment. I only raise babies to give away. Baby chickens, baby preying mantises, lady bugs. WHAT EV! 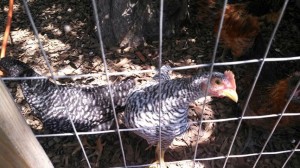 Is That You Mommy??

THIS IS THE THIRD INSTALLMENT IN A SERIAL SAGA. Please read Book 1, My Familiar Stranger (FREE EVERYWHERE) and Book 2, The Witch’s Dream FIRST!!

A secret society, a witch, a psychic, vampires, modern day knights, heroes, elves, fae, assassins from another dimension, and fairytales come together where emotions intersect. Two souls, joined by a mystical bond, separated by distance, must simultaneously struggle through pain and darkness in an ultimate confrontation with character and an ultimate struggle for life proving that true love waits patiently through lifetimes and finds courage to survive. Even in the strangest places. Even when you’re least expecting it. Even when you’re far, far from home.

Grace Taylor is an adorable young actress trying to make it in Hollywood.But she’s having a really bad day.She is dumped by her boyfriend, fired by her agent, and kicked out of her apartment, then things get really nasty…

Grace comes to the rescue of friend, Madison, a gorgeous redhead with a deadly secret.During the struggle Grace kills a man in self-defense, a dangerous man with a lot of dangerous friends, forcing Grace and Madison to run for their lives.

Pursued by the mob, wanted by the cops and the FBI, Grace and Madison find themselves in a firestorm of bullets, blood, betrayal, kidnapping and murder.

Sexy Babe is a wild and wicked thriller full of humor, unforgettable characters and nonstop action.

“When the character of a man is not clear to you, look at his friends.” Culminating a bitter-sweet epic and traditional coming-of-age story, ‘Eyes Behind Belligerence’ sets precedence to fear and hatred, to families torn apart, and to the calloused response of internment camps. While two Japanese-American families endure the wake of Pearl Harbor’s wrath, each member must face the most painful question of their life: Where does their loyalty stand?

Told in five parts, this novel unravels the challenges between two unlikely Nisei friends, Jim and Russell, into adulthood during the Second World War. As restrictions are imposed, (even in the safe, rural community of Bainbridge Island,) as harassment’s escalate, (including the F.B.I. invading their homes and deporting their fathers to Montana for espionage trials,) the fated day arrives: evacuation of all Japanese civilians. Rounded up like cattle, tagged, they are hauled to the fringes of Death Valley: Manzanar. Together they must survive racism, gang violence, and the harsh elements of the environment. Together they must prove their loyalty, especially after a tragic riot on the eve of Pearl Harbor’s anniversary. While Russell enlists in a segregated army, becoming part of one the most decorated units in U.S. history, Jim is sent to a different camp for the “No-No” boys: those who are marked disloyal. Removed from their families, they are forced to reevaluate their identities and discover, most importantly, what it means to forgive.

Storm on the Frontier-Part One (The Demonstar Series)
Dalton Wolf

Currently numbering nine Member Races and over twenty Candidate Races that populate several hundred worlds throughout the Hope Galaxy, the Galactic Worlds Alliance is a constantly expanding entity with over two thousand years of history. But something is amiss along the ever-expanding Frontier of the Alliance… Ominous whisperings of grim events begin to surface and echo throughout portions of Fleet and the civilian population. Rumors persist about whole colonies that disappear without a trace, but the Senate and Fleet echelon steadfastly deny anything out of the ordinary. Facing opposition and procrastination from a Congress frozen by fear, the Chief of Intelligence takes action, declaring an emergency along the Frontier. Short on resources along the border worlds, he is forced by circumstances to conscript an old friend, a civilian shuttle pilot and part-time living legend, into Fleet service with special orders: Investigate the mysterious incidents along the Frontier and track the events to their source… at all costs. Now, in an effort to save the border worlds Pilot Baran Igashu must set out with an elite, handpicked team on a hazardous mission to unfamiliar and unknown destinations. But their perilous journey might very well uncover an ancient menace so evil and irrepressible that it threatens to annihilate the whole of the known galaxy, leaving no trace their civilization ever existed…

Fifteen-year-old Cooper would rather spend the summer playing the latest Zombie Civil War Style video game than with his ailing great grandfather, Orson. But when Orson’s Civil War stories reveal a treasure buried near his home in Pea Ridge Arkansas, Cooper not only pays attention, he gets involved.

An ancient map and journal lead Cooper to the same spot in the forest where dozens of people have searched for the legendary treasure. Cooper is trapped by a ferocious dog and forced to fight for his life while he tries to uncover the mystery and locate the treasure that is unlike anything he ever imagined.

In this young adult adventure story, Brookins gives readers a treasure that’s the perfect length for busy tweens and teens.

Are you sick and tired of seeing your family eating unhealthy junk food? Do you want your family to eat tasty and healthy nutritious food? This book was written for those of you who understand the importance of eating healthy and want to prepare great healthy meals for the entire family.

Various food products contain toxic ingredients or they’re just not good for your health, therefore you want to eat healthy food, to feel better, to visit the doctors less frequently and maintain a healthy lifestyle. In everyday life we are all exposed to many unhealthy foods, and temptation gets the better of us.

All that is about to change-after reading this book, you’ll know how to choose healthy foods that are suitable for you. You will learn ways to prepare healthy food for you and your family, and you’ll live a better and happier life.

The author, Shirley Miller, a mother, nutrition expert, and member of CHFA – the Canadian Health and Food Association, has researched the effect of food on health for over 15 years. Thousands of families have applied the recommendations in this book, and reported a significant health improvement!