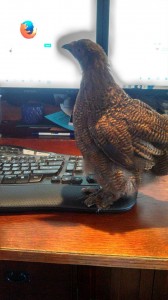 We all knew it was Heather writing these posts all along! She is the only one who wants another chicken in the flock.

A down-and-out L.A. lawyer with nothing to lose…

A beautiful Mexican woman who disappears crossing the border…

And the powerful and corrupt rancher who would destroy them both.

Haunted by a personal tragedy and wanted by the cops, lawyer Jimmy (Royal) Payne wants to skip town. That’s when he crosses paths with 12-year-old Tino Perez, newly arrived from Mexico, looking for his mother Marisol, who went missing after crossing the border with a vicious coyote.

Before long, the cynical lawyer and the savvy kid are bonding and tracing Marisol’s path, battling predators on both sides of the border. Most dangerous of all is Simeon Rutledge, a wealthy rancher, and the biggest employer of farm workers in California. Just why is Rutledge willing to kill Payne to keep Marisol under wraps?

It’s a story of human trafficking and sex slavery, a mother’s love for her son, and the redemption of a man intent on escaping his past. From the shadows of migrant stash houses to the fertile fields of the San Joaquin Valley, ‘Illegal’ delivers a searing mix of live-wire prose, shattering violence, and rich characterization. Set against larger social issues, this is a masterful tale from one of the most skillful practitioners of the modern thriller.

The story of Owain Glyndwr, the last Welsh Prince of Wales.

In the year 1399, Welsh nobleman Owain Glyndwr is living out a peaceful gentleman’s life in the Dee Valley of Wales with his wife Margaret and their eleven children. But when Henry of Bolingbroke usurps the throne of England from his cousin Richard II, that tranquility is forever shattered. What starts as a feud with a neighboring English lord over a strip of land evolves into something greater–a fight for the very independence of Wales.

After a harrowing encounter on the misty slopes of Cadair Idris, the English knight Harry Hotspur offers Owain a pact he cannot resist.

Peace, however, comes with a heavy price. As tragedies mount and temptations loom, Owain questions whether he can fulfill the prophecies and lead his people to freedom without destroying those around him.

For centuries, the bards have sung of King Arthur’s return, but is this reluctant warrior prince the answer to those prophecies?

A disillusioned heiress is catapulted from the glamorous world of Alpine skiing into the cutthroat trenches of Thoroughbred racing.

The hunky trainer’s job now includes babysitting a manipulative owner’s rebellious granddaughter. She’s the last thing this horse-loving loner needs…but she turns into the only thing he really wants.

You can’t change an addict…or can you?

When privileged 20 year old Stevie Gates flees her coastal Massachusetts home for Atlanta, Georgia with a bottle of vodka in hand, she doesn’t know she will soon awaken in a hospital emergency room with an intravenous needle dripping Phenobarbital to prevent an alcoholic seizure. She doesn’t know that she’s about to get sober, or even that she wants to be. L.A. ICE (a slang term for methamphetamine) follows Stevie’s emotional journey through a sixty day rehab stint and into a deeply intimate relationship with another patient who gives her the courage and insight to confront her past and the alcoholism that is slowly killing her. Meet Michael James, a brilliant and charming musician whose meth addiction might just prove to be as unbreakable as his love for her.

For Animal Lovers is a heartwarming book for kids ages 9-12. Although mainly a short story collection for children, it also appeals to adult readers who are young at heart. Prepare to be transported into the world of each animal, as they tell their tale in their own words.

“Becoming Sacred” – Charlie is a cow who lives on a farm, but plans to escape and move to India, fulfilling a promise he made to his late father.

“Pascal’s Magic” – A classic cat story. Pascal is an adopted shelter cat who has been through a lot. Now with new owners, he finds he needs to work his special brand of magic to save his family.

“Abduction at Sea” – Alice is a special-needs swordfish who’s obsessed with aliens. In order to be an independent gladiator of the sea, Alice has to learn to confront some of the greatest dangers the ocean has to offer.