Now I know who the large dark brown egg belongs to, but who does the teenie tiny little egg belong to? HEATHER!!! A watched chicken does lay! Once again I am a happy proud chicken mamma! 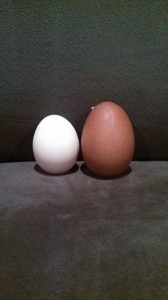 June Heal has nothing to lose when she relocates her homeopathic cure shop, A Dose of Darla, from the flea market booth in her home town, to a quaint shop in the cozy but unusual little town of Whispering Falls, Kentucky. Or so it seems.

Whispering Falls has a lot of secrets. From talking snow globes to whispering animals not to mention a few sprinkles of fairy dust, June realizes Whispering Falls is more magical than she thought. . .literally.

June discovers she was born into a family of psychics, and her homeopathic cures truly are magical. Unfortunately, they are not magical enough to save her from being the number one murder suspect when a member of the community that she had just had a disagreement with shows up face down in the lake with June’s lucky charm in the victim’s grasp.

Add to that an attraction to her high school best friend, Sheriff Oscar Park andMr. Prince Charming, her cat, is stealing charms from Belle’s Baubles, June is forced to clear her name in more ways than murder. After all, they don’t have cauldrons in jail.

A Charming Crime is book one of the bestselling Magical Cures Mystery series. Come walk around Whispering Falls for a fun, fantasy mystery with magic and romance. You won’t want to leave.

It takes just one moment for everything to change…

Struggling to put her life back together after a tragic mountaineering accident kills her college sweetheart, twenty-one-year-old Holly Treadwell is trying to set aside her grief, forge ahead in school, and find herself again.

When Carter Hansen, a guy who brings back horrible memories from the night of the accident, finds his way back into her life, Holly’s unsure if she should let him in. He terrifies her in more ways than one and invokes feelings in her that she thought were buried forever.

Everyone tells Carter that what happened on the mountain that night was just a terrible accident, but even then, he can’t help but carry around the guilt and is unable to forgive himself. He’s drawn to Holly and being near her helps ease his conscience and gives him the release he needs.

As Holly and Carter’s relationship grows, they begin to realize that the more time they spend with one another, the more their wounds begin to heal–her grief and his guilt. But when Holly learns the details about the night of the accident–what everyone has been keeping from her–it will rip open old wounds and tear apart what they’ve both worked so hard to overcome…

Think Augusten Burroughs hilarious recovery memoir, “Dry” blended with the classic “One flew over the Cuckoo’s Nest”.Follow Grant through recovery from alcoholism amidst the twists and turns of side-splitting comedy in a rural old folks home in Arkansas that doubles as a mental institution.

Meet a host of unforgettable, quirky characters that help float Grant over the undertow of substance abuse, and its horrible consequences.Witness the rediscovery the meaning of life in this memoir entwined with comedy, drama and the affirmation of love and recovery.

Following substance abuse’s aftermath of destruction and despair, the central struggle for the main character is to fill the void left by the cessation of alcohol.The tension for resolution is driven by the alcohol related death of Grant’s best friend and the nagging question, “if no addiction, then what?” Hilarity abounds as Grant seeks these answers from a cast of misfits who are his institutionalized patients.

This memoir concludes with the answer, that the vaccum, the hole created by the removal of an abused substance, must be filled with “life”.This is an excellent book of inspiration and consequence for anyone going though recovery, who knows someone going through recovery, or anyone who enjoys a rollicking adventure of comedy, tragedy, love, rebirth and life’s lessons learned.

There will be a time when you believe everything is finished. That will be the beginning. ~ Louis L’Amour

The place was a giant cesspool turned whirlpool that pulled all the badness of the land into it, until the vortex contained the giant soup of decadence and evil, contained the worst of human kind.

But Hell Street has a new enforcer, a lawman who has honed his skill in Hell’s Kitchen, the meanest of the Five Points district of Manhattan. Will it be enough?

Allingham is the story of one man’s struggle to face down his demons along with the meanest and most degenerate of human kind in the worst town in the last frontier of the West, Canyon Diablo, Arizona Territory.

Man is the cruelest animal.

Allingham and his crew are back, forced to confront an evil unlike anything any of them have ever known or dreamt possible. Redheaded women are dying, will Rebecca Allingham nee Halsted be next? The great sleuthhound Allingham will have to summon all his skill and guts to overcome a horrific monster that has come to disrupt the peace and quiet of their retirement in a deadly game of cat and mouse.

There are challenges enough for all, Rosario and Hobbs, once again pressed into service as deputy US Marshals to track down a bloodthirsty revenge killer, Mr. Singh, bent on protecting the most precious thing on earth to him, and Rebecca Allingham, both huntress and hunted.

Ride with them on this desperate journey as new characters are introduced into the tumultuous world of the Allingham clan. The Mexican lawyer turned hacendado, Ramon la Garza, Hilola, a woman as wild and unpredictable as the Colorado River on which she and the young mestizo must travel to get home, back in old Mexico.Tough as nails Old Pop and gentle Pierce Hall, the stalwart protectors and avengers, desperately working to purify and rectify a damaged family legacy.

Time is running out. The murderers are bearing down. Will Allingham pull it off, find the monster in time? Will La Garza and his wild companion escape the clutches of the deadly bully and cutthroat Thad Hall? Find out in Desperate Ride.

An Experimental Dystopian Political Thriller for a world on the brink! Shattered confidence in political, economic, social, and religious institutions have left the world grasping for a way out — any way out. Be careful what you wish for.

When Dogs Could Talk dabbles not only in body parts and aberrant sexuality, but ideologies, philosophies, ruined psyches, and political agendas. What may happen if the world does not confront the uncontrolled excesses of States and the enemies of reason.