Maybe It Was The Rain

It’s really quite cool when you realize you have great friends. One of my best friends, we shall call her The Other Crazy Lego Lady That Knows Of My Great Fear Of Clowns And Loves To Torture Me With Them. Okay, maybe that is a bit long of a name. How about we just call her Meanie for short. Well yesterday Meanie gave me this wonderful little fella pictured below. I’m not sure if she is really sweet or if she just has a really mean streak in her, but either way this guy is awesome….and very creepy. 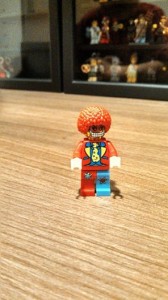 The Promise of Paradise
Allie Boniface

The Prequel to the Hometown Heroes series!

Ashton Kirk, youngest daughter of a prestigious senator, fiancee of a hotshot attorney, and fresh Harvard graduate, is headed for a promising law career when scandal breaks apart her family. To escape, she rents an apartment in the sleepy town of Paradise, New Hampshire, where no one knows who she is.

Ashton hopes for solitude, but all bets are off when Eddie West, the town’s most eligible bachelor, moves in downstairs. Eddie likes his women and his cars shiny, sleek, and fast, and when he meets his new housemate, he wastes no time getting friendly. While he’s looking for a no-strings romance, though, he gets more than he bargained for in Ash, who sees through his bravado to the pain of a loss too fresh to mention.

Can two people from different worlds find common ground, a place to fall in love and build a future? Is it possible to find your soul mate in the place you least expect?

Children of the After: Awakening (book 1)
Jeremy Laszlo

It has been six months since their father locked them in the security vault with a promise to return. But he never came back.With supplies running out and vital life support systems failing, Jack, Samantha, and Will have no choice but to ignore their father’s warnings and leave the vault. With no knowledge of what befell the world outside, or what they might expect once the door is opened, they find themselves in a world they do not recognize.

Thrust into the remains of the world they remember, how will they survive on their own, not knowing what or who else remains amongst the ruins?

In early post 09/11 New York, Jack Dowd, a retired detective of legendary status, is hired to protect 2 pornography producers who’s lives and careers have been threatened.As he descends into their world, his loyalties, weaknesses and vices are tried, exposed and tested. A gritty, character driven tale int the pulp, detective genre.

A novel akin to Silence of the Lambs.

Dallas Russell is cop who is struggling with sanity and stability, but he has no time to heal his wounds.Murders, reminiscent of a past too close and too deadly, are occurring in South Beach, Miami and he’s the one to solve them.If it doesn’t kill him from within first.

The man Dallas fears most, the Father, resides within him, and all of us.A new breed of killer that uses your own weakness to carry out acts so heinous it is beyond human understanding.

The killer is within us all.The father breeds us for his bidding.Dallas has time and himself against him as he attempts to stop the Father’s deadliest creation.

We are only a breath away from indoctrination into a world of righteousness at the cost of others’ flesh.

As a private military contractor for over twenty-five years, D. Alan Johnson has lived the life that he portrays in his new novel, Asgaard. Using the Great African War in the Congo as the background, Johnson paints a story of conflict between greed, politics, and religion. The dictator whose wife falls for a mercenary pilot, an American missionary, and the CIA medic struggle to survive with honor when an assassin changes the Congo forever. Will they be able to escape the anarchy and bloodletting in the resulting power vacuum?