As you all know I have a slight love of all things sweet and bad for me, and sometimes I eat before I think. This is a bad thing since I have such a horrible peanut allergy. Growing up my parents had to keep a very watchful eye on me because if people offered me food I would shove it in my mouth without even a thought that it could have peanuts in it. This is why I was so excited to hear about a new movement that has started called “The Teal Pumpkin Project.” This is straight from FARE’s website. “This campaign encourages people to raise awareness of food allergies by providing non-food treats for trick-or-treaters and painting a pumpkin teal – the color of food allergy awareness – to place in front of their house along with a free printable sign from FARE to indicate they have non-food treats available.” I love this idea! Time to get painting! 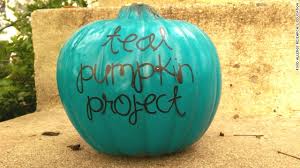 The Pearl Savage—where 19th century Victorian America collides with biospheres fueled by steam-punk technology. An epic romance between a “fated” princess and a Savage unfolds despite every obstacle thrown in their way…

Clara Williamson is a princess living in a dark post-apocalyptic future of bio-spheres fashioned to protect 1890s America. A time when marriages are arranged for things other than love. When her sadistic mother betroths her to an abusive prince from a neighboring sphere to secure their future in illicit trade, Clara determines to escape.

Leaving a life of familiar terror behind, she embraces the dangers of Outside that no one from the spheres has seen in nearly a century and a half.

Clara escapes tyranny only to discover the sphere-dwellers are not the only people who survived the cataclysmic events of one hundred forty years prior. She finds herself trapped, unable to return to the abusive life of the sphere while facing certain danger Outside.

Can Clara find love and freedom with the peril that threatens to consume her?

Clara has become queen and yearns to unlock the puzzle of her lineage. Matthew and Bracus, survivors of the post-apocalyptic Outside and protectors of the Band, accompany Clara in her journey to the eastern seaboard to discover her true family.

Trouble seeks them in the form of the Fragment, a maundering group of nomadic criminals, who thrive on exploitation and control. When the faction absorbs Prince Frederic into their ranks, they undertake a plan to involve Clara and her home sphere in a dangerous scheme of coercion for their own gain.

It isn’t long before Clara discovers a terrible secret about the very ones who saved the people of her kingdom from certain destruction. The Guardians are not who they seemed. Through terrible circumstances she must escape, can Clara protect herself from her own destiny and keep the integrity of her sphere intact?

Will the needs of her people, war and tribulation overwhelm her need for a love all her own?

King Raymond is betrothed to Princess Ada of a neighboring sphere in an arranged match not of his choosing. Travelers from a parallel world have bargained to save the future of his people and he cannot refuse their offer.

Raymond does not believe that an alliance with the Savages would result in a life-altering experience. He soon finds himself overwhelmed when an entanglement of emotion and love conspire to undermine his vow in the most unlikely place.

Rowenna, warrior female of the Band, is a much sought-after female select. When her kin agree to an offer that will unite the races of their future, they do not realize what the sacrifice will cost her.

Can the two peoples of separate societies survive the prejudicial position that has been hoisted on them? Will their sacrifice afford a future of liberty, or will heartbreak be the only consequence of their love?

Melissa Bliss has just set a personal record. She’s matched up 49 couples, and she’s just itching to make it 50. While most days find her working at her Isle of Palms vacation property, Island Bliss, her true passion lies with matchmaking, a gift handed down through generations.Melissa cherishes using her gift to find the perfect match for friends, lonely hearts visiting the island and anyone but herself.

Shane Carver would like to make a match with Melissa since he met her six months ago. Trouble is, Melissa’s believes Shane’s perfect match is the tall, stacked brunette who’s new in town. While Melissa admits she has strong feelings for Shane, going against her matchmaking gift when all signs point to a different soul mate for Shane, isn’t an option.

To prove that Melissa’s the one for him, Shane will have to convince her to go against everything she thinks knows about true love and perfect matches and for once to listen to her own heart.

The Memoirs of a Prague Executioner: A Historical Novel Based on Actual Events
Josef Svátek

A young man is about to graduate from medical school when a sudden shift of fate changes his life forever. He becomes stuck in the most detested profession for the rest of his life, and he is on his way to becoming the most well-known executioner in the history of Bohemia.

Master Jan finds himself in the center of the historical events of the time. The religious and political turmoil of Bohemia culminates in the 1621 White Mountain Battle. Czech Protestant rebels are defeated by Catholic forces, and Master Jan is to execute 27 men who are his fellow Protestants.

The Old Town Executioner gives the reader a first hand account about how justice was carried out by the medieval law. While his memoirs offer an intriguing account of the manners and values of late medieval society, his observations about human nature may come as a surprise. The law and society have changed since the 17th century, but people have changed very little.

Damaged Right Out Of The Box
Alan Felyk

It started at birth when a doctor left an indentation on Alan Felyk’s forehead with his forceps. Yes, Damaged Right Out Of The Box…

It was the beginning of an ordinary life that was often blended with the improbable. The result is a sometimes hilarious, sometimes wistful personal experiences book that discusses survival despite asbestos, radioactive particles, talcum powder bombs, a butt-crack abscess, quadruple coronary bypass surgery, and women… not necessarily in that order of importance.

Jobs such as a groundskeeper, ditch digger, road crew member, waiter, surveyor, houseboy, and taxi driver provided a perfect background for his career in journalism. As a writer/editor, he left Walter Cronkite on hold, covered a vice presidential speech while stoned, and helped get Clive Cussler fired. He has found “love” on the floor of a grade-school coat closet, in the bushes of a college dormitory, and draped over a toilet seat. And somewhere among the distant stars his name could still be aboard an ill-fated spacecraft that may have sailed past Mars.

Don’t leave hot coffee on the dashboard for this one-Felyk’s book is a rapid stop-and-go ride that spans more than six decades of laughs, misadventures, and bittersweetness.

Her blue eyes were luminous. They drew him in and saved her life… for a while.

An odyssey begins, and along with it a mystery that will lead inexorably towards a fateful meeting. The paths of the travelers move randomly and relentlessly towards a single point and a life and death encounter in the Iowa countryside.

The first in a new series, Blue Eyes, by Glenn Trust, ‘An Empty Tree’ is a hard-boiled, literary thriller takes the reader along on the journey where things are not always as they seem.