Is The Diet Working?

If my pup weighs 40 lbs…how much do you think my kitty weighs? 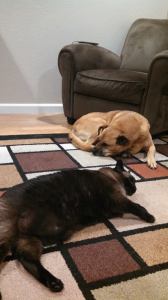 He is still on a diet.

After a life-threatening asthma attack induced by the fumes in her newly painted Upper West Side apartment, Heather Morrison falls for Jeff Davis, the handsome but very married doctor who revives her in the ER. Her “knight in shining armor” turns out to be less of a knight as time goes by and more of a heartbreak waiting to happen.

When their relationship ends, Heather’s life dramatically changes as she finds herself addicted to prescription pills Jeff prescribed, and her future as an adoptive mother in question. Set in the bustling city of New York, A Medical Affair by debut author Anne McCarthy Strauss could be a game changer for many women as it reveals what most people don’t know – that an affair between a doctor and his patient is always ethically wrong and often a violation of law.

Along with Heather, the reader learns the truth behind her doctor’s behavior and her subsequent filing of civil suit. Although a work of fiction, A Medical Affair was extensively researched. This is truly a story that must be told.

Michael Goetz stepped in to protect a group of defenseless children when he was just a child, but he never imagined that his action would alter the course of his life.Born into a violent family, Michael Goetz never felt like he belonged until he stepped in to join his neighbors in saving their little town of Paradise, Pennsylvania from rising floodwaters.

The Amish neighbors Michael met that day proved to be more generous and loving than anyone he’d ever known.They stood by him when tragedy struck and Michael had to fight for his freedom.

But will the Amish accept him as one of their own?Will Michael be able to publicly proclaim his feelings for Salome Yoder, or will he be forced to walk away from everyone he loves?Will God find a way to heal Michael and show him the power of community and family?

STARS IN THE TEXAS SKY is a story about 13-year-old Henry Valentine. He’s the school’s star pitcher, intoxicated by first love of a young girl, and all seems right with his world of 1952 racially separated East Texas. Then he is confronted by an unlikely antagonist, a colored boy who challenges him in his town, bests him in a pitching duel, and fights him in the vacant lot outside of town. A wary distance becomes an unexpected friendship when they discover a common love for Texas beauty. He is devastated when a corrupt congressman sacrifices Henry’s friend to win re-election, and receives no sympathy or help from his disapproving family, church, and town. His finds support in the feisty, independent-minded widow with a taste for liquor in her lemonade who helps him fight against the powerful using only the tools of an innocent and powerless boy. In the end he learns the value of standing for what he believes in face of opposition, and discovers that there is nothing more powerful than a boy – or a man – who knows who he is.

Buried treasure.450 years ago a treasureship went down. In Miami, the heat hasn’t let up yet… Hap Tyler windsurfs on Biscayne bay, hears voices, seduces young women, and lives on the edge of history in his family’s old-money mansion amid Miami’s pastel glitz. But while Hap stumbles around in the shadow of his more successful older brother, Daniel, a tangled web of deception and greed is being spun around him –a web that leads Daniel to his death.

Trying to solve his brother’s murder, Hap collides with a 450-year-old secret: the disappearance of $400 million in a sunken Spanish plunder.Daniel’s upscale girlfriend is close to digging up the treasure, an avaricious senator has already tasted it, and a stone-cold killer will stop at nothing to bring it home. The century-old city of Miami is a town that murder built. One of its darkest secrets and greatest treasures is about to be exposed.

Make your Thanksgiving dinner one they’ll remember … in a good way!With awesome food!

Do you search year after year for the perfect Thanksgiving recipes to add a new twist to your traditional turkey and dressing menu?Thanksgiving is a difficult holiday to try to serve something different.Sometimes the tried and true is what everyone wants.So why not give it to them – with some upgrades, of course!

This new Thanksgiving recipe book from Natalie Oliver includes a complete menu with recipes for a stunning traditional turkey and dressing meal.Your family and friends will enjoy upscale tradition and never know what hit them!If you’ve decided to be daring and go with something other than turkey, Natalie also includes two other menus – one with a lamb main course and one with pork.

Each mouth watering menu includes appetizers, a main course with several side dishes, a dessert, and a signature drink for the meal.You’ll also have a chance to get printable shopping lists for each menu and a BONUS!See inside the book for details!