Can I Hug Them?

I guess a house full of screaming kids and parents is nothing to to a mamma bear. She seems to be enjoying her breakfast with her little cub with no issues at all. No…I did not give her Honeycomb cereal. I never share my cereal. Mine! 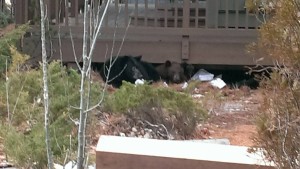 Kinda want to hug them.

A prophecy of murder. An elf hunted by dragons. One man who risks everything to save her.

Nachal is a human that should not be having prophetic Dragon Dreams. But he does. Every night he dreams of an elf running through flames, trying in vain to outrun the Rebel Dragon Obsidian. Every night he sees her fall. Sees her eyes close. Feels her heart as it slows, and then stops. Every night, through the connection of the dream, he dies with her. It’s a spiral that he can’t control, and it’s slowly driving him insane.

Auri is an elf raised by a powerful human king not of her own blood. Left behind by the mother who perished far from the elven isle El`dell, she seeks to forge her life among the humans. Her journey takes her to the land of her heritage. To a place that holds both a haunting betrayal, and a miracle that just might save her life.

Together, they become embroiled in a conspiracy where destinies are intertwined, love is born in the fallout of ultimate sacrifice, and the only path to victory lies through the searing flames of dragon fire.

This is an inspiring memoir written about a young man coming of age in West Virginia in the 1960’s. It is a memoir but also a real thriller story as we follow Jerry from the streets surrounding Lincoln playground to Chicago Steel mills to the French Quarter in New Orleans and to San Francisco in the Summer of Love 1967. The book then moves you to the Central Highlands in Vietnam where Jerry is an infantry platoon sergeant. Jerry’s interesting and truthful account of his childhood years and transition to an adult and Infantry Sergeant are truly endearing. It is an honest and compelling story.It gives a first person narrative of hand-to-hand combat in the trenches of Vietnam that can leave you scared, glad to be alive and eternally grateful to those who died for our freedom.

Jerry joined the army to simply be able to afford to go to college. Forty years later he has a PhD and multiple degrees but they were earned at a heavy price for this patriot. Jerry shares his experiences in Vietnam in an articulate, honest and direct assessment of his time in Vietnam, the men he served with and the horrors of war. It is an incredible story of leadership and survival.

We see Jerry develop as a young boy who is very independent and then see him being schooled on the streets of Charleston, West Virginia learning how to come to grips with the breakup and divorce in his family. He takes refuge in becoming the best he could be as a basketball player on the courts of Lincoln playground. Later we see him leaving home for the mean streets of the Chicago Steel mills and then on to Louisiana where he completes one year of college and then goes flat broke. Then the book shifts to New Orleans Louisiana and the excitement of the French Quarter.

Jerry’s life is rocked by the turbulent waters in New Orleans; he had no money no plan and is drifting. He seeks out another lifestyle in California hitching to and then living in San Francisco during the Summer of Love 1967. He describes how it was, the music and time and place and he takes you there through his vivid descriptions.

Once again, his life spins into turmoil and as he tries to get back on the path to achieve his life’s dream of going to college he is drafted in the Army. He finds himself becoming a leader, an infantry sergeant. His goal is to bring himself and his men back home alive, the reader gets the sense that all his life Jerry has been prepared for this moment. The reader is taken through and see’s through Jerry’s eyes what combat is really like.

This story covers much ground and has something for everyone. You live through Jerry ‘s experiences of what it’s like to conquer your own demons, you read about his mother’s courage having Jerry in the Salvation Army by herself, the excitement and freedom of the 1960’s and you learn what it is like to want something so bad you lay your life down for it. It is a book you truly won’t lay down once you start reading.

Can True Love Conquer a Zombie Mutation? Prepare Yourself for an Undead Zombie Romance Novel, One That is Oozing With Dark Humor!

Cryogenically-frozen heads that come to life and race around by the power of their spinal cords, like human horseshoe crabs…Zombies stumble about looking to feed their brainy eating habit…San Francisco becomes a bleak, apocalyptic landscape in this dark humor, zombie satire, where…A mad scientist — Dr. Trope? Dr. Meme? No, Dr. Egessa, the mad German scientist — chasing the Nobel Prize and his living prize…… Cathren Whitney, a half-human, half-zombie miracle, who must also outrun and outsmart…Zombie Native Americans…The mad scientist’s Russian girlfriend, with her own agenda…A back-to-the-earth movement with its own agenda…Various zombie street gangs…And her own jaded view of life and love.

In this zombie comedy, Cathren and her boyfriend Donovan are trying to figure out how to make a living in San Francisco, while trying save their faltering relationship. Meanwhile, a cryogenics lab contaminates the local water supply, and strange things began happening…

Teddy Stanley is a sixty something, retired waitress. Three times married, twice widowed, once divorced, she lives beach side on the Oregon coast. The purchase of a bargain lid for her septic tank occasions the discovery of the body of a local real estate developer/good old boy. The local sheriff, a poker playing buddy of the deceased, could be the killer The sheriff likes her friend Rob, the business partner of the dead man for the deed.

Her Name was Half Calf
S.A. Molteni

Her Name was Half Calf is a non-fiction short story about the life and death of a pet cow.