A Taste Of The Past

I am taking great satisfaction in the fact that I am putting Hostess Twinkies in the kid’s goodie bags for my youngest basset’s birthday party. I bought three boxes, so I should definitely have some extra. I might just add those to my Zombie Apocalypse emergency pantry. I know they have a long shelf life.  I giggled when I bought them and I am giggling at them now as they are sitting, waiting to be distributed. I just feel like the kids will enjoy them like I did when I was young. Nothing healthy…nothing natural..nothing good for you. Just pure yummy. But here is the kicker. I’m an adult now. If I eat the Twinkie, it will be gross and the memory will be shattered, so I don’t dare eat it myself. Plus I might just have a heart attack. 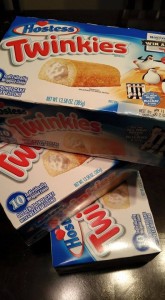 I bet you could build a house with these things.

The streets aren’t safe when your enemy wears a blue uniform and a gold badge. What if the good guys weren’t good? What if a cop went rogue and killed an innocent man? What if it was all caught on video and the cop would do anything to cover it up?

Sixteen-year-old Joy Montgomery, daughter of Zephyr the Magnificent, the great magician, can only reminisce of better times. Before the Superiors. Before the uprisings. Long ago. Before the dying Earth ripped the family she loved away from her. She can only dream of the adventure life must’ve been before their ancestors brought the apocalyptic devastation in the form of disastrous climate change.

In this desolate dystopian future, the Greenleigh orphans are “privileged” with the task of building mechanical trees for the post-apocalyptic survivors in Bygonne, so their world behind The Wall can breathe another day, and so the Superiors may continue their malevolent reign.

Lured by a yearning for freedom, tenacious curiosity, and hunger for adventure, Joy discovers hope and magic amid the misery, and power in her promise to care for those remaining, whom she loves enough to risk her life for. To save them, herself, and the boy she adores from the abuse and slavery by the Superiors, Joy must entrust the aid of an unlikely ally who harbors a dangerous secret.

With an intriguing stranger at the helm, Joy and the treemakers embark on an intense and terrifying, yet liberating quest for the truth about the existence of the forbidden paradise beyond The Wall.

The evolution of the aeroplane used in the context of war was exponentially fast between World War I and World War II, during the First World War planes were used for mainly for intelligence gathering and were only able to achieve speeds of a maximum of 145 miles per hour. This then evolved into planes being used to take each other down using grappling hooks and this then evolved into shooting each other with rifles.

Follow the development of the use of air combat during World War II, learn about the progression of planes being used for increasingly treacherous combat. Go from the ‘dogfighting’ days of fighting with hooks and rifles right through to hundreds of planes converging on each other.

Discover the moment when forces had the life changing realisation that they could use planes to transport and drop bombs on land using the now world famous and at the time heavily feared Zeppelin.

The journey through this book will take you from the aforementioned origins of air combat to the strengths and weaknesses of each of the involved forces in the war.

Hear stories of the brave men who fought in air combat during the war such as Douglas Bader, a British pilot who earned the title of ‘ace’ four times over due to his 20 kills during his illustrious air career; this feat is even more incredible due to the fact that following an accident in 1931 he had no legs which allowed him to defy the laws of gravity and g-force to constantly astound colleagues and senior officers.

This eBook is a thrill ride which builds from page to page, it is a must read for anyone with even a slight interest in the topic of World War II, you will read things that will astound and impress you on each and every page.

From the ashes of a traumatic upbringing, forty-six-year-old Claire Fowler has forged an idyllic life in an affluent Rhode Island enclave with her college-sweetheart husband, Tim, and their ten-year-old daughter, Ally. Even the family dog is convinced he’s arrived at the sweet spot of life.

But things are about to change.

When a last-minute business trip sends Claire to Cincinnati with her hypersexual subordinate, she is vexed but resigned. And when a vicious migraine sends her to a saggy hotel bed and him to the marketing conference in her place, she is first relieved and then thankful. Weeks later, upon discovering she’s pregnant, Claire has no reason for concern. With the help of genetic counselors and fertility specialists, she and Tim have been striving for a miracle-sibling for Ally.

And now they have one: a precious baby boy they name Owen.

But all is not well, and soon Claire begins spotting alarming quirks in Owen’s behavior that suggest he is stricken with Dukate Disease, the terminal illness that took her brother in 1979. If Claire is right and Owen is sick, other disturbing things may also be true. Things like: Claire has been raped; Owen is not Tim’s son; and Owen is going to die.

As the truth of Owen’s conception emerges, Claire finds herself at the mercy of an unthinkable choice. Her decision—and its harrowing consequences—threaten not only her career and her marriage, but even her freedom.

The Eye of Elicion: The Kinowenn Chronicles Vol 1
Rachel Ronning

The Eye of Elicion introduces us to Lucy. Disappointed and discouraged with the job opportunities in the paper, her eye is drawn to an ad for Wizard school. On a whim, she applies and soon finds herself attending a school very different from any she has before. She learns different methods of casting spells, new languages, geography of other worlds, horsemanship, and how to fight with a variety of weapons. Lucy finds her niche with a unique group of students that are asked to go on a quest in the world of Kinowenn to acquire the Eye of Elicion, a semi-mythical magical item. Follow Lucy on this adventure in this light-hearted fantasy as she learns, laughs, and discovers things she never knew were possible.

Nod sympathetically if you’ve ever…

…extracted a gum wrapper from a toddler’s nostril, but sought medical treatment when it came to a piece of a colored pencil lodged deeply into an ear canal.

…punished a child because he wouldn’t stop taunting his brother with a Peter Frampton album.

…played a rousing game of “What that’s funky smell?” only to discover what might be a petrifying bologna sandwich behind the recliner.

…needed a prescription for a tranquilizer when your firstborn started driving.

…spent any amount of time trying to describe why a Sleestack scared you, why you wanted to marry the Fonz, and who Mork from Ork was.

…installed a security system to keep a three-year old from going on the lam with his beagle, and pondered if it were possible that both of your children were reincarnates of Harry Houdini.

…wondered how a child who once emitted the sweet scent of newborn now puts off an odor that could make a skunk feel inadequate.

…ever rambled incoherently, “These kids are going to drive me to drinking,” or something about a frontal lobotomy.

If you nodded like a bobblehead, chances are you’re a parent – or you’ve got some really strange hobbies. A Little Off-Kelter…the parenting years is a collection of forty columns that originally ran in print.(Hey, the compilation thing worked for Ronco and K-tel, didn’t it?)Whether the kids are underfoot or have flown the nest, moms and dads alike will relate to these humorous tales of woe and wonderment.