Since its release, the award-nominated THE TRUTH BEYOND THE SKY has been professionally produced as a Audible.com audiobook and featured on public radio for predicting gravity waves years before they were officially detected. Dubbed a “Highly Addictive, Sci-Fi Adventure!” by review sites, THE EPIC OF ARAVINDA series by Andrew M. Crusoe is fast-paced adventure you’ll never forget. Enjoy! 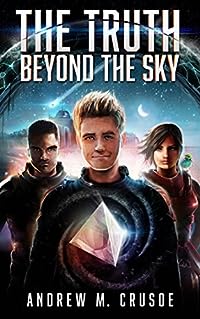 The Truth Beyond the Sky (The Epic of Aravinda Book 1)
Andrew M. Crusoe

Twelve years after his mother’s disappearance, Zahn makes his annual hike up to the island peak to sleep above the clouds — only to be awoken by an alien object thundering down from the sky, changing the course of his life forever. At last, Zahn has the chance to learn the fate of his mother, but the opportunity comes with a price: leave his world in a self-aware starship, with no guarantee of return. Now on the verge of twenty, he leaves his planet, bound for the galactic core where he encounters the vicious Vakragha, an ancient species that craves the largest prey: entire stars. Bent on tearing at the fabric of spacetime itself, the Vakragha scream toward Zahn’s home. Only the Tulari, a stone that can heal these fissures, offers any hope to Zahn and his new friends. But saving his world from total enslavement isn’t all he has to worry about. Just when Zahn lands on a moon the Vakragha stole, he makes a breakthrough, finally learning his mother’s true fate. Now he is faced with a decision that could either save his world or doom it forever. 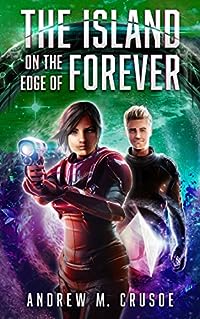 The Island on the Edge of Forever (The Epic of Aravinda Book 2)
Andrew M. Crusoe

When Asha accepts a mission to recover a sacred stone capable of raising the dead, she doesn’t expect her ship to be attacked high above an unknown world. Asha and her commander, Mira, are dragged into the planet’s wild ocean, and she barely manages to escape a vast underwater complex. Once Asha reaches the surface, she discovers a mysterious island that comes to life with dancing villagers and roaring bonfires every night, only to vanish without a trace each morning, leaving her feeling alone and confused. Yet that isn’t all Asha has to contend with. Having followed them to the planet, the Vakragha are desperate to find the stone first, bent on using it to revive their greatest mastermind. And when Asha finds Mira on the verge of death, the full burden of the mission shifts to her. Time is running out, and Asha must rely on her courage, intuition, and healing skills to have any hope of survival. But she soon discovers that the Vakragha aren’t the only ones searching desperately for the sacred stone…

A fast-paced, tropical Sci-Fi novel inspired by my adventures on the Big Island of Hawaii, THE ISLAND ON THE EDGE OF FOREVER is part of the Epic of Aravinda series. You can dive into the series with either THE TRUTH BEYOND THE SKY or with this book. So grab the book & begin! 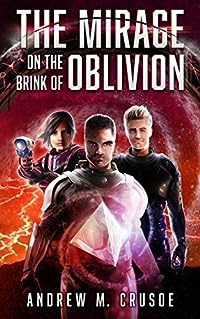 The Mirage on the Brink of Oblivion (The Epic of Aravinda Book 3)
Andrew M. Crusoe

What if you could hold a memory in the palm of your hand? In the Mirage, you can. Reachable only by leaving the physical body and entering the out-of-body state, the Mirage allows all within it to trade memories like souvenirs and create structures that defy physics. And now, after centuries, even the memory of the devastating Vakragha attack on their world has all but been forgotten, and most have lost touch with the physical world altogether. Jyana is different. Driven by her desire to understand the natural world, she dedicates herself to studying the sea below Mirage City. Yet when she finds that the coral reef is being decimated by an unknown cause, no one will take her seriously, not even Torin, whom she loves more than anyone. Ambrosia supply shortages are getting worse, and Torin fears a crisis is brewing. Its formula a state secret, ambrosia gives architects the power to form colossal structures, and without it, their entire civilization would surely collapse. In the midst of this, the entire city is shocked when a refugee from before the attack returns. Filled with questions, Asha has come with a secret mission to find the 3rd sacred stone and use it against the Vakragha. But Jyana fears that taking it would destabilize their world, causing the end of the Mirage itself.