Come join me on this roller coaster ride of murder, mayhem and romance. Throughout this journey we find mystery, romance, and redemption. This was an amazing collection Christian romantic suspense by some very good authors. Encounter familiar authors and meet some new ones as well. Enjoy! 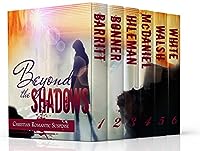 Gone by Dark by Christy Barritt: Ten years ago, Charity White’s best friend, Andrea, was abducted as they walked home from school. A decade later, when Charity receives a mysterious letter that promises answers, she returns to North Carolina in search of closure. With the help of her new neighbor, Police Officer Joshua Haven, Charity begins to track down mysterious clues concerning her friend’s abduction. They soon discover that they must work together or both of them will be swallowed by the looming darkness.

The Unrelenting Tide by Lynnette Bonner: Widowed former-Hollywood-actress Devynne Lang has been living a quiet life in the San Juan Islands of the Pacific Northwest. For years, she’s hoped her fabricated death would keep her identity safe from the public, and more to the point, from the stalker who forced her into hiding. But strange things have been happening around her place and this time, with a daughter to protect, she can’t afford one mistake – even if it means letting Carcen Lang get close enough to help.

Saving Grace by Lesley Ann McDaniel: When an obsessive fan forces opera singer Tracy Fontaine to change her name to Grace Addison and go into hiding in a small Montana town, the last thing she wants is to get to know the locals. Now, not one but two men have worked their way into her daily routine, much to the chagrin of a jealous local girl, who insists on prying into Grace’s past and stirring up deadly trouble. Will Grace find love in Madison Falls… or will her stalker find her?

When Night Comes by Dan Walsh: Jack Turner comes back to his alma mater to give a series of lectures for his old history professor. Within days, he starts having bizarre experiences at night. Like he’s traveling back in time, experiencing the epic events in his lectures firsthand. Several college students suddenly start dying in their sleep. The Professor who’d invited Jack begins acting edgy and strange. And there’s this beautiful brunette in the back row. Every time he looks at her, she’s smiling at him. She looks vaguely familiar.

Battered Justice by Linda Bradley White: FBI Special Agent Jake Tucker works hard to be an excellent investigator and a great dad. Having Cass McKenna as his partner helps. An investigation into a shooting leads them to a shadowy trail of crime connected with a casino–and the battered body of Jake’s ex-wife. Jake is sure Tam’s new husband, a powerful state senator, killed her. But Lady Justice can be battered, too. Soon Jake and Cass find themselves in the fight of their lives.