The Wind Is About To Change

Author Miles Maxwell is known for taking his readers on a roller-coaster ride of action and suspense that will keep you captivated until the end. Mesmerizing, intense and all too real, this wonderful collection will have you on the edge of your seat. Enjoy! 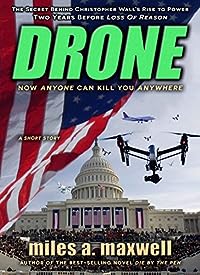 Drone: A Short Story Thriller — The Secret Behind Christopher Wall’s Rise To Power (State Of Reason Mystery, A Prequel)
Miles A. Maxwell

Now anyone can kill you anywhere! An act of terrorism. A Presidential election. A Constitutional crisis. And a terrorist who may get away scott free! And it could happen again, perpetrated by anyone, anywhere… at a financial cost of next to nothing!

His name was not Shalik Sarram, but it was the name on his passport, and he entered the Customs area at JFK bearing no aerosol cans of infectious disease, no knives or scissors or weapons of any kind. He was in perfect health. He had three thousand dollars in his wallet and a credit card with a limit of five thousand which he needed to show to get into the country on a visitor’s visa, but wouldn’t touch. The well-dressed Indian — as it said on his passport, flying in from Delhi — presented himself at Immigration Control in his elegant dark suit, his pale blue tie. Shalik was a name meant to impart an outgoing personality. He wore a happy, friendly grin on his nicely-tanned, clean-shaven face. Anything to declare?” the Immigration man asked, scanning Shalik’s passport into the computer. Just my iPad,” Shalik said, pulling the device from inside his jacket. He turned it on. Held it out. The man shrugged. “Purpose of your visit?” Tourism. First stop — after my hotel,” Shalik smiled, ” — the Statue Of Liberty! I can hardly wait!” Immigration passed him through to Customs, where a female agent searched his blue roll-on bag, glancing surreptitiously at Shalik’s face while she poked through his clothes, watching for the signs — changes in breathing, posture, expression. But the man remained smiling, watching her casually as if the intrusion meant nothing. Inside, Shalik was seething. The woman’s touch was haram. Forbidden. Unpure. Fortunately, the clothes were merely a prop, cheaply purchased to create a specific persona. Once Shalik had left the airport he would throw them away. “Okay. You’re clear to go, sir,” she said, flipping the fabric top, sliding the case a couple of inches toward him. “Thank you.” Shalik zipped the bag, set it on the floor and left the airport at an even pace, looking around enthusiastically — as if fascinated by everything he saw. Shalik’s real name was actually Sharik which he’d always thought fit him perfectly, so close was it to the English word Shark. He hated Shalik. Sharik was an Arab name! Shalik was Hindi! It was a small sacrifice. Shalik was a terrorist. Recruited and trained for a specific purpose, a mission that had already begun. He found a yellow cab. Got in. Gave an address. Ready to move on to Step Two. 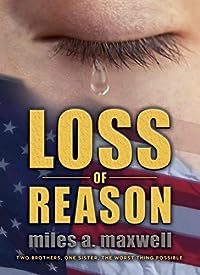 Loss Of Reason: A Thriller (State Of Reason Mystery, Book 1)
Miles A. Maxwell

One Of The Most Disturbing Stories You’ll Ever Read

Distant for many years, Franklin out of Pennsylvania and his step-brother Everon out of Nevada are connected by a single link: Their sister Cynthia. Enter The Nightmare A nuclear bomb is detonated in New York. Banker, wife, mother, Cynthia lives in New York. The military has quarantined the city. All bridges and tunnels have been destroyed or blocked. Easterly winds have forced the bomb’s huge radiation cloud out over Long Island. But the wind is about to change. Franklin climbs mountains and truly understands people. Everon can fly anything. And Cynthia’s brothers are determined to find her. If it were your sister, what would you do?

A ripping good tale of how intelligence and determination can overcome the near-impossible. And of the true price of altruism. Before there was Wool there had to be a Loss Of Reason. 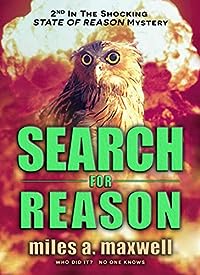 Search For Reason: A Thriller (State Of Reason Mystery, Book 2)
Miles A. Maxwell

Who did it? Someone bombed New York. In a near miss on Washington a second city has been destroyed. Is it militant Muslims? White Separatists? Russia? China? North Korea? Or the worst serial killer of all time — not taking one life or even twenty, but four million? No One Knows Lost religious texts appear. Entire faiths are rocked to their foundations. Well-known, highly-respected clerics thought to have been killed by the New York and Virginia City bombs are being kidnapped… For two brothers Franklin and Everon, the loss, the motivation, is very personal. While Everon’s team struggles to restore a power system devastated by the bombs’ EMP, Franklin works to restore the personal power of individuals in his emotionally distraught congregation, and those behind the bombs begin to reveal themselves. As clues come fast and furious, the brothers’ own lives become imperiled when the bombers’ sights are set on them. 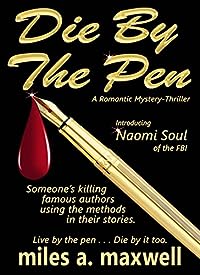 Die By The Pen: A Romantic Mystery-Thriller
Miles A. Maxwell

Why Should Men Have All The Fun?

Three of the best men in the world are in love with Naomi Soul. They live in different parts of the country — she barely has the time. Naomi’s busy solving cases for the FBI, and trying not to neglect her English bulldog Winston — when along comes one of her worst cases yet! Someone’s Killing World-Famous Authors Using The Methods In Their Stories! A world-renowned novelist and his wife are found dead in their East Florida beach home — with no apparent cause. Something outrageous has been done to the bodies. Another best-selling author is killed on the other side of Florida. This time the cause of death is obvious. Are the two murders related? Connected? The MOs are completely different. Clearly someone’s killing authors using the methods in their stories. The killers appear to be unstoppable, and to have some mad, crazy plan. But former Olympic athlete FBI Agent Naomi Soul and her best friend Agent Xue Sang are on the case. They’re the pop literary world’s best chance to survive.