Who Will Survive The Maze?

Author C A A Allen’s The Cave Maze is a wonderfully written fantasy that really makes you feel like you are a part of their world! This masterfully written fantasy is fast paced and action filled throughout. The characters are also quite relatable and easy to root for, with an original, engrossing, and often quite funny plot. Enjoy! 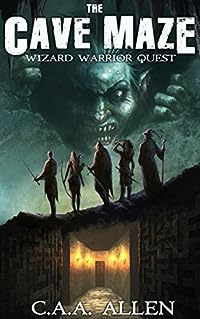 The Cave Maze: Wizard Warrior Quest
C A A Allen

He was only eight when a bloodied sorcerer tutored him on the perils of questing in the Cave Maze… … The craving to enter has tormented ever since. The Wizard Talhoffer stocked the underground labyrinth with a murderous assortment of beasts, traps, gold, and personal magic items worth dying for. And treasure hunters did die for them. Not Raff Jenkins. He planned to survive. After losing the scholarship for the questing university, sword whiz Raff takes drastic measures to earn tuition. With the help of his hustling cousin Dread and a party of rag-tag locals… he heads into the maze as a newbie. What he discovers inside is more than just treasure, bloodthirsty hags, or crotch-masticating hellhounds – he learns that a link to his past is tied to the fate of his kingdom. Will he return in time to pay off the death-threats awaiting him at home? Will he return at all?

*DUNGEON MAZE ACTIVITY INCLUDED!* This Kindle version of The Cave Maze includes, The Labyrinth of Fear, the first in an original maze activity series by grand labyrinth designer Master of the Playing Cards, whose mastery of maze design inspired a powerful, and puzzling activity to be included with this edition.