D.R. Bell demonstrates his broad knowledge of history, the financial markets, politics and people in this great collection. His characters are believable, interesting and psychologically authentic. In addition to the great stories, Bell warns of the consequences of the destruction of the middle class and growing inequality, the dangers posed by an increasingly aggressive Russia and China, the increase in surveillance of our activities by both government and industry and the erosion of liberty. A fabulous new author that will entertain and educate. His thought-provoking novels are a treasure.  Enjoy!

To help his father, Ben moves back into the old neighborhood. Years ago he was a popular athlete in the local school, then a successful mid-level executive, father, husband. Now Ben is a loner, content to spend his free time in the “reality” of the internet. Ben reluctantly snaps out of his seclusion when he tries to understand why an old friend and neighbor killed himself and realizes that this is no longer the same neighborhood he grew up in. It’s as if someone used resources of social media, internet and surveillance to strip away a layer of civilization, exposing a nightmare of conflicts and betrayals. When Ben is threatened by the same forces, he has to re-discover his own strengths to fight back against a shadow opponent.

Pavel Rostin has taken too many chances. Once a promising physicist, he abandoned science for finance and risked everything on a speculative venture. Careless and rogue, he gambled with his personal relationships. As Pavel tries to pick up the pieces of his life, a call from Russia informs him that his father is dead. When Pavel follows his father’s footsteps trying to solve the mystery of his death, he turns up some inexplicable clues. The investigation draws him deeper and deeper into his family’s past – and his country’s future. From starving 1941 Leningrad to free-wheeling Moscow of the mid-1990s to bubbly 2006 Wall Street, Pavel uncovers a web of money, murder, revenge and evidence of a plot involving the world’s superpowers. The choices of right and wrong don’t look as clear cut as in newspaper headlines. But is he just a pawn in someone else’s game?

The Metronome is the first book in The Counterpoint trilogy and a prequel to the earlier published The Great Game. The Great Game and The Metronome are largely independent, with only a minor overlap amongst the characters. The Outer Circle brings the heroes of the two earlier books together to conclude their journey. 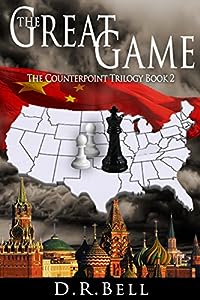 After years of patient preparation, a block of countries led by China and Russia stages an overnight financial coup to unseat the US dollar as the world’s reserve currency. Fortunes are made and lost in a matter of hours. But some have more far-ranging plans than financial gain. Computer engineer David Ferguson has no idea that a chance meeting with a friendly stranger in the airport will change everything. Suddenly, he is running for his life, without knowing why or from whom. In trying to evade his pursuers, David accidentally involves Maggie Sappin, a graduate student and a transplant from Kiev. To save themselves, they have to uncover the reasons behind a financial crisis and political upheaval that followed. From Los Angeles to Texas, Kiev, Moscow, and New York, the body count mounts along with the layers of deception as two innocent people become key players in — The Great Game.

This is a work of fiction. But what are presented in the story as facts of the time of writing are indeed facts in real life. And if some elements look hard to imagine, back in the early 1980s one would have been laughed at for suggesting that in a few short years people would be dancing on top of the Berlin Wall and the Soviet Union would be no longer. While The Great Game has originally been conceived as a stand-alone work, it is now the middle book in The Counterpoint trilogy. The prequel, called The Metronome, has been published in August of 2014. The Great Game and The Metronome are largely independent, with only a minor overlap amongst the characters. The Outer Circle brings the heroes of the two earlier books together to conclude their journey. 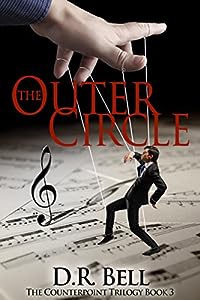 It’s 2024 and the world is divided, pitting the United States against the combined forces of China and Russia. In China, domestic unrest pushes the leadership to act against Taiwan. In Russia, under the surface a power struggle is brewing. Such is the backdrop of the U.S. presidential elections where the established parties face a challenge from unexpected political newcomers. The two heroes of The Great Game, now fugitives, discover that not everything is what it seems and someone invisible is pulling the strings behind the scenes. But can they stop the events set into motion before the world slides into a war?

The Outer Circle is the last book in The Counterpoint trilogy. It brings together the characters of The Metronome and The Great Game to conclude their stories. NOTE: a revised edition of the book has been published on August 16th. If you have the “old” version, you’ll be able to update the content through the “Manage Your Content and Devices” page on Amazon.com. I apologize for the inconvenience.