Tangled In A Web

If you are looking for masterfully crafted mysteries then look no farther than the River Sunday series by author Thomas Hollyday. In his fiction he describes his recurring theme that human settlers, since prehistoric times in the Chesapeake region, have left a mist of legend and history that permeates its modern stories with a certain compelling truth. At the same time he incorporates the stories of machines with those of their human owners. Each novel, located in the small town of River Sunday, Maryland, also records the continuing beautiful nature of the area. His writing portrays today’s problems, conflicts, and memorable local characters with their loves and their combat with evil. The River Sunday series are standalone stories which can be read in any order. Enjoy!

A traitor in our midst. On July 4, 1946, Navy Captain Edward Lawson attempted to fly an experimental seaplane into the hands of the Soviet Union. The top-secret plane crashed in the Atlantic Ocean before he could succeed with his traitorous action. His body, and the wreck of the plane, were lost at sea. Mike Howard runs a small aviation museum, and, several decades later, his war-hero family still feels the sting of Lawson’s unpatriotic actions. When Mike is pressured by Lawson’s grandson, Jesse, to mount a search for the traitor’s corpse, his first instinct is to vehemently refuse. However, his scholarly instincts quickly get drawn into the hunt, and he soon realizes that there is much more to the story. As Mike’s corporate sponsors passionately lobby for him to stop stirring up old issues, it is made clear to him just how tangled the web of espionage has become. Soon bodies are dropping like flies and Mike is forced on the run. He desperately unravels the threads of deceit, scrambling for the truth before his own life – and the lives of those he loves – are brutally added to the list of sacrificed men of conscience. 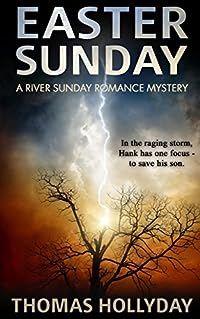 A father’s love and family anguish. Hank Green’s young son, Bobby, is lost in a cave beneath a water-drenched swamp of the Chesapeake Bay. The wilderness is known for Native American mystery as well as an unsolved World War Two secret. Even worse, a powerful Easter Sunday storm with its flood surge is barreling down. Hank rushes to join the team of experienced local firemen and friends who will try to find and rescue his son before the boy drowns. Yet he feels once again his own numbing personal terror. He is overcome by a lifelong claustrophobic fear of entering closed spaces like caves. It’s a phobia he inherited from his immigrant father, a displaced person from the 1945 European war, and his own Vietnam experience. He knows if the others lose hope and fail, he will go on alone and risk his life to save his child. He must find a way to conquer his weakness but time is running out.

Religious overtones fill Easter Sunday, Book Seven of the River Sunday Romance Mysteries, the latest of this acclaimed Chesapeake series by Thomas Hollyday. The author’s unique voice once again gives us an exciting read about this unique American region.

What evil and good will the archeologist find in the past of the small town? Dr. Frank Light, archaeologist, is vastly annoyed. He’s settled into a plush life – cushy department-head job at a university, suave girlfriend, book in the works. Now he’s been ordered into the sludgy, back-water marshes of Maryland to fend off hordes of mosquitoes, all because of an inconsequential find at a bridge construction site. Maggie, the outspoken state archaeologist working the dig, insists the shipwreck has historical significance. Pastor Allingham is even more vehement, insisting the decaying timbers hide a rumored, long-lost slave graveyard. Real estate tycoon Jake Terment is furious that his construction project is held up by the growing concerns of Frank and his team. Jake cranks up the pressure for a quick resolution. Others passionately feel the archaeology project should either come to a crashing halt or press full speed ahead. An eclectic group of butterfly fanatics, a mysterious waterman of Mexican heritage, a curvaceous movie star, and even ghosts make their presence known. When several attempts are made on the team members’ lives, Frank draws on lessons from his Vietnam vet past. He has to decide on which side of this battle to stake his claim – and if he is ready to risk his life again for his beliefs.

The River Sunday Romance Mystery Series can be read in any order. Part of the proceeds from the sale of Thomas Hollyday fiction and non-fiction goes to support drinking water resources for wildlife.

Science fiction at its best. John Neale is throwing in the towel. He has followed his conscience for too long, working for pennies to support local farmers in the quiet Chesapeake town of River Sunday. With his own bills mounting, he is doing one last job before selling out to the corporate life. He just needs to finalize the will of Father Tom, a beloved priest who passed away while performing a mass. To the town’s surprise, it seems that Father Tom had access to gold – to the tune of millions of dollars. None can figure out where the stash of precious metal was coming from, or how many millions still remained. A modern day gold rush ensues, with prospectors descending on the town from all corners of the world. John struggles to fend off the enthusiastic claims of the church as well as the scrabbling efforts of neighbors while making his own furious explorations of the brush-encrusted fishing property Father Tom maintained. When a Native American burial mound presents evidence of a history tracing back far more than local tribes could account for, John realizes the significance of his discovery could go far beyond monetary wealth. His world enters the realm of science fiction, and he races to stay one step ahead of death in his efforts to share the truth with the world.

The River Sunday series are standalone stories which can be read in any order. Part of the proceeds from the sale of Thomas Hollyday fiction and non-fiction goes to support drinking water resources for wildlife.

Black lives matter. Harry Jacobsen is a disgraced failure of a foreign correspondent. Fired from a respected New York City paper.,he takes refuge as editor for a small weekly in a quiet town on the Chesapeake. The most excitement he sees is when a trio of children come across the sunken hulk of a racing boat, lost thirty years ago. The black captain, Walker John Douglas, had crashed his vessel after killing two women and burning down half the town in a period of racial unrest. Harry’s investigative reporter instincts kick in, and he begins to delve into the history of Walker and the infamous inferno. River Sunday, evenly split between black and white, roils in chaos at his front page headlines. Half the town welcomes the fresh exploration of the civil rights actions, while the other half would rather leave the past alone. The streets are also flooding with tourists as the largest event of the season – a nationally acclaimed powerboat race festival – swells the discussion with high profile personalities and racers who remember Walker’s racially charged legacy. As Harry unravels the threads of time and reveals the truth of what happened during the racial clashes of the Sixties, the heat levels rise in the once peaceful town. Passionate emotions threaten to spark a fresh wave of riots the likes of which River Sunday had not seen in decades. Harry races to discover the full story in time to save lives – and to save the town from burning anew.

The River Sunday series are standalone stories which can be read in any order.Part of the proceeds from the sale of Thomas Hollyday fiction and non-fiction goes to support drinking water resources for wildlife.