The Other Side Is Just The Begining

Author Steven L. Hawk’s novels are flawlessly-written science fiction adventures with sympathetic characters and fast-paced plots. These stories cut across genres and subgenres by incorporating cultural issues of nature and nurture, war and peace. Complex heroes and complex issues like these hit the page with the force. Enjoy!

PEACE WARRIOR It’s the mid-21st century when Sergeant First Class Grant Justice is killed during an ambush on an enemy tank column. Six hundred years later, his body is retrieved from the frozen, arctic lake where he perished. Re-animated by a team of scientists, Grant awakens to a civilization that has abolished war. A civilization that has outlawed violence and cherishes Peace above all else. A civilization that has been enslaved by an alien race called the Minith. Grant is humankind’s final hope against the alien menace. He must be the… Peace Warrior. 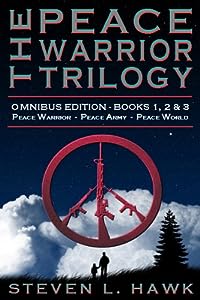 The Peace Warrior Trilogy – Omnibus Edition Contains all three volumes of the trilogy, as well as bonus material not available in the stand-alone novels, including author drawings, diagrams and notes.

Book #2: Peace Army It’s been six years since Grant Justice was brought back to life to help the Peaceful citizens of Earth defeat the Minith. Life should be good. The Minith are gone. Grant now has a loving wife and a remarkable son. He is a hero to the society that once shunned him. But Grant hasn’t been taking life easy. He’s been recruiting fighters away from Peace. He’s been cobbling together an army from the dregs of society and training them to fight. Which is a good thing, because another alien Mothership is heading their way. It will reach Earth in less than a week. Grant and his small army have been preparing for this day. They must be the… Peace Army.

Book #3: Peace World Reanimated after six hundred years, Grant Justice has become the leader of Earth’s new army. Unwilling to sit back and wait for the next attack, Grant decides to take the fight to the enemy. He and a mothership full of his best fighters are headed toward Waa, the aliens’ new home world. Unknown to Grant, a fleet of alien motherships is headed toward Earth — intent on punishing the planet for destroying Minith. Who will win the battle for supremacy — the alien slavers with a thirst for war, or the humans struggling to survive and save their way of life? Who will finally rule the… Peace World.

For more than a dozen years, Eli has studied the art of war from some of the most skilled fighters on three planets. There’s no question, he has what it takes to be a professional soldier. There’s just one problem. His father is General Grant Justice, the most famous man in the galaxy and leader of a new governmental alliance that unites four alien races. When it comes time to enlist, the younger Justice has to make a choice. Rely on his last name and claim an automatic commission as an officer? Or enter basic training as a lowly private and earn his way to the top? For Eli, the decision is an easy one. He changes his name and enlists as an anonymous recruit. Unfortunately, not all of life’s choices have such clear-cut answers. An alien-led rebellion is brewing in the ranks of the army he has just joined, and Eli is forced to choose sides. His actions will determine the fate of his father, the alliance, and the entire human race.

Ben Watkins has a gift. His dreams drop him into other people’s bodies… for five minutes. When Ben is dropped into Billy Shoe, drummer for the world’s most popular rock band, all bets are suddenly off. The needle in his arm, the tattoos on his hands, and the loud pounding on the other side of the stall door are just the beginning. He wakes up after a drug-induced slumber, sick and in dire need of another fix. The five-minute rule has been kicked to the curb. Somehow he’s gotten… STUCK. 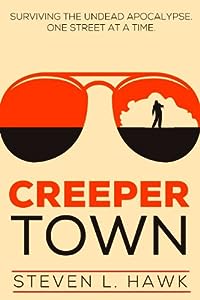 When their unit gets overrun, Army Rangers Cody Wilkins and Jim Swanson narrowly escape the growing horde of undead. Driving an armored Humvee with the delicacy of a battering ram, they strike out for Cody’s boyhood home in Boise, Idaho. Unfortunately, the peaceful neighborhood where Cody grew up hasn’t been spared from the global scourge, and the two Rangers are faced with that age-old decision: Fight… or flight? The two soldiers are joined in their fight by a varied cast of zombie-fighting heroes including a teenaged Latina and two four-pound chihuahuas, Cheech and Daisy.