Tears of the Silenced by Misty Griffin is a beautifully written, compelling and courageous story of severe child abuse and of leaving the Amish. 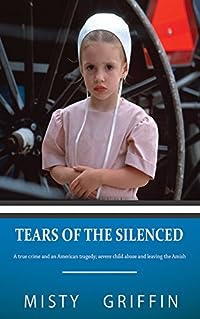 Tears of the Silenced
Misty Griffin

When I was six years old my family started to live and dress like the Amish. For the next twelve years, my sister and I were subjected to almost complete isolation, sexual abuse, and severe physical violence. In my late teens, my parents feared we would escape and took us to an Amish community where we were adopted and became baptized members.I was devastated to once again find myself in a world of fear, animal cruelty and sexual abuse. Going to the police was forbidden. A few years later I was sexually assaulted by the bishop, I knew I had to get help and one morning in early March I made a dash for a tiny police station in rural Minnesota. After being excommunicated from the Amish I found myself plummeted into the strange modern world with only a 2nd or 3rd- grade education and no ID or social security card. Based on the tragic and inspiring true story.