This collection by author Jay Allan is filled with fast moving action, suspense, mystery and intrigue with well developed characters, plot and story line. Against seemingly insurmountable odds most of humanity will rise to the challenge to protect the colony worlds and the home planet. This is the story of humankind’s survival efforts and the sabotage it must endure and hopefully eradicate for the promise of a brighter future. Enjoy! 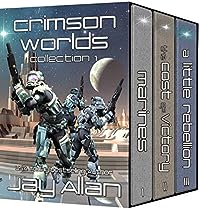 Marines (Crimson Worlds I) Erik Cain joined the marines to get off death row. The deal was simple; enlist to fight in space and he would be pardoned for all his crimes. In the 23rd Century, assault troops go to war wearing AI-assisted, nuclear-powered armor, but it is still men and blood that win battles. From one brutal campaign to the next, Erik and his comrades fight an increasingly desperate war over the resource rich colony worlds that have become vital to the economies of Earth’s exhausted and despotic Superpowers. As Erik rises through the ranks he finally finds a home, first with the marines who fight at his side and later among the colonists – men and women who have dared to leave everything behind to build a new society on the frontier, one where the freedoms and rights lost long ago on Earth are preserved. Amidst the blood and death and sacrifice, Erik begins to wonder. Is he fighting the right war? Who is the real enemy?

The Cost of Victory (Crimson Worlds II) The Third Frontier War is raging, and all across human-occupied space worlds are burning. Massive battlefleets struggle for dominance and kilometer-long war ships exchange thermonuclear barrages. Battered in the early years of the war, the Western Alliance is resurgent. The brilliant Admiral Augustus Garret leads the Alliance fleet from victory to victory, taking the war to the very heart of the enemy empires. And on the ground, Colonel Erik Cain, hero of the Marine Corps, leads his crack troops again into combat, seeking the final battle. In the background, the secretive intelligence agencies of the despotic Superpowers plot and scheme, using their own soldiers as pawns in the great game for control of space. But the final battle will be fought in the reddish sands of a backwater world, and the prize will be the staggering secret that has lain hidden in a remote cave for untold centuries. All the Powers struggle for the ultimate victory, but at what cost?

A Little Rebellion (Crimson Worlds III) Crimson Worlds Book III The Third Frontier War is over, and the Western Alliance is triumphant. All across human-occupied space, colony worlds celebrate the coming of peace. But peace is an elusive dream, and more trouble is brewing. The war was expensive, and the economies of the Superpowers, always fragile, are on the verge of total collapse. The Directorate, the shadowy intelligence organization that has become the true power behind the Alliance government, plans to strip the colonies bare to pay the costs of war. Already, they are tightening their control over the freewheeling colonial governments. And the Marine Corps faces total destruction at the hands of the worst traitor in its history. But the colonists are a different breed than the passive mob on Earth, and they have no intention of meekly surrendering their hard won freedoms. On worlds all across the frontier, plans are hatched and weapons hoarded. And in taverns and meeting halls the words of an ancient text are uttered in hushed tones. A little rebellion, now and then, is a good thing. 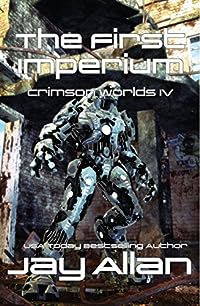 The Alliance and its colonies have called a truce and signed the Confederation Agreement, ending the rebellion and providing the frontier worlds with guarantees of limited self-government. It is a makeshift agreement, born of necessity and exhaustion. No one expects the deal to last, and both sides are preparing for the next showdown. But from the depths of space another challenge is coming, one that will endanger the very survival of mankind and force not just the Alliance and its colonies, but all of the Superpowers, to join forces or face annihilation. The dusty ruins the Alliance discovered on Epsilon Eridani IV were built by an ancient race, eons dead. But their guardians remain, and the disturbance of the long silent caves triggered an automated alert, one which has been heard. And answered. Erik Cain and his Marines grimly take to the field once again, for what may be their final battle, against the robotic legions of the First Imperium. But facing a ruthless and technologically superior enemy may be easier than learning to fight alongside old enemies. 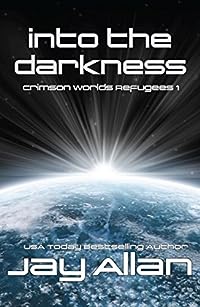 Into the Darkness: Crimson Worlds Refugees I
Jay Allan

Terrence Compton is one of Earth’s greatest admirals, a warrior almost without equal. Alongside his oldest friend and brilliant colleague, Augustus Garret, he and his forces saved Earth from invasion by the robotic legions of the First Imperium’s insane computer Regent. There is just one problem. The First Imperium was held back by the disruption of the sole warp gate connecting the two domains… and Compton and 300 of his ships are trapped on the wrong side, surrounded by the Regent’s vast fleets and cut off from Earth. Pursued by their deadly enemy, Compton and his fleet must flee into the darkness of unexplored space, seeking safety… and ultimately a new home. Their journey will take them deep into the heart of the First Imperium, to the silent, windswept worlds where the ancient race that built the Regent once dwelled… and uncover the lost secrets of its disappearance 500,000 years ago.

Duel in the Dark: Blood on the Stars I
Jay Allan

The Confederation has fought three wars against the forces of the totalitarian Union. Three generations of its warriors have gone off to war, held the line against the larger, more powerful enemy. Now the fourth conflict is imminent, and the Confederation’s navy is on alert, positioned behind the frontier, waiting for the attack it knows is coming. The battleship Dauntless has spent the past ten months patrolling the border, deployed far forward of the main fleet, a forlorn hope, an advance guard positioned to give the warning of invasion. But no attack has come. Her crew is exhausted, and the aging battleship needs maintenance. With the fleet mobilized and the forward bases overloaded beyond capacity, she is sent clear across the Confederation, to a planet along the quiet and peaceful far frontier. Her crew is looking forward to a rest, and Dauntless herself is scheduled for a long-overdue maintenance session. But the quiet frontier isn’t what it seems… and when a distress call is received from one of the mining colonies on the edge of Confederation space, it falls to Captain Tyler Barron to take Dauntless forward, to find out what is happening, and to put a stop to it. Barron and his crew have their ship — and each other — but they can expect no other help. Suspicion is strong that Union deceit is at play, that the attack is some sort of diversion, intended to draw Confederation forces from the disputed border. The orders are clear. No ships will be transferred from the prospective battle line. Stopping whatever is happening on the rim is Barron’s responsibility, and his alone. Barron is the grandson of the Confederation’s great hero, the father of the modern navy. His family name has always carried privilege with it, and crushing responsibility. And now he must prove that he has inherited more from his famous grandfather than name and privilege. He must face the enemy, and win the victory… before the Confederation is caught between two enemies and destroyed.

Blood on the Stars Reading Order Book 1: Duel in the Dark Book 2: Call to Arms (January 2017, Available now for preorder)