At The Precipice Of War

Alex Paul’s Arken Freeth And The Adventure of the Neanderthals series are fun reads filled with dangerous pirates, monster sharks, feats of strength and endurance, a beautiful princess, and all the terrific characters that make for an exciting adventure. Enjoy! 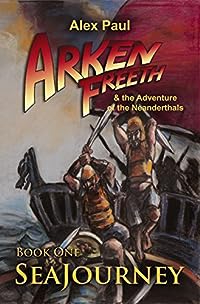 A young warrior stands at the precipice of war…

To succeed he must find his courage and survive a treacherous journey across the sea.

Arken Freeth has always wanted to prove himself worthy of his king’s appointment by becoming an officer in the Lantish Sea Service. Now the only thing standing in his way is his apprenticeship SeaJourney. But a peaceful training mission soon turns into a deadly struggle for survival as Arken’s fleet must come to the aid of a princess fleeing capture by Tookan pirates. SeaJourney kicks off an epic and fantastical adventure that is a great read for all ages. 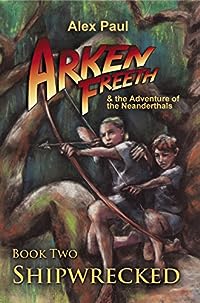 As war looms like an evil shadow over the world… Arken Freeth must save his crewmates’ lives as they traverse a deadly jungle filled with massive wolves and sabertooth cats. In the age before the Great Flood, 13,000 years ago, a new alliance between the nations of Lanth and Tolaria is threatened by pyramid-building Amarrats out to conquer and enslave the world. Fourteen-year-old Arken Freeth is swept up in the conflict when his Lantish Military Academy training ship is attacked by pirates and runs ashore. He and six classmates are the only survivors of the shipwreck, and they struggle to live in a jungle filled with saber-tooth cats, dire wolves, mammoths, and mastodons. Arken has salvaged a necklace from the wreck–a necklace that bestows the gift of prophecy. If Arken can get it to the King of Lanth, he will turn the tide of war. SeaJourney kicks off an epic and fantastical adventure that is a great read for all ages. 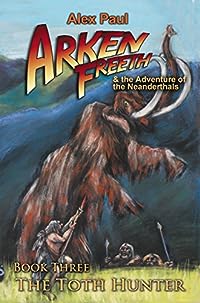 Arken learns more about the secrets of his heritage and discovers the strengths it offers will help him to earn a place of leadership among his grandmother’s people. Arken Freeth and Asher, the future king of Tolaria, find themselves trapped in the Nanders’ Water Cave as they await the recovery of Arken’s love, Talya. While living among the Nanders, Arken earns the respect of the tribe as he hunts the deadly jalag and massive toth with the tribe. But Arken, Asher, and Talya soon anger the wife and son of the tribe’s leader, Jen. If Arken does not accept Jen’s challenge to the death, all their lives will be in jeopardy.