Fallen Sun: The Great War by Harule Stokes is a gritty and heart wrenching story of friends, love and war. The focus was on the mental anguish the characters had between their hopes and wishes and obligation to duty, their loyalty and sacrifice for friends and country. It challenges the reader to question the truth behind power struggles of any kind. 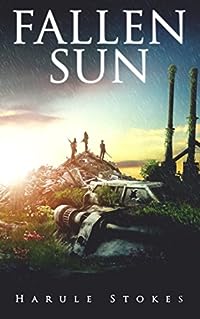 Jocelyn Martinez wasn’t a warrior, she was a teacher. But with her country losing the war, she agreed to be transformed into a living war machine, becoming one of the Fingers of God. Three years later, the land lies in ruins. Yet, over countless battles, she and her brothers- and sisters-in-arms have turned the tide. Now poised to finally defeat their enemy, they are confronted by an ever worsening threat. The process that transformed them into the world’s most powerful weapons is also driving them insane. Nothing could have prepared Jocelyn for the tragedy of seeing her friends slowly fall apart. Yet, despite everything, she cannot relent. Their enemy is preparing a weapon that can stop even a Finger of God. Fighting enemies within and without, Jocelyn and her comrades must make its final push towards victory. Can they get there before everything falls apart? One thing’s for sure–succeed or fail, nothing will ever be the same again.