The Struggle For Dominance

If you are looking for space battles, sinister plots, spies, and a tad of romance, then the Crimson Worlds series by author Jay Allan is for you. Join Erik Cain and his comrades as they fight an increasingly desperate war over the resource rich colony worlds. Enjoy! 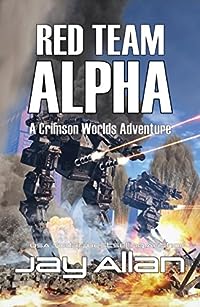 An elite military unit. Twenty highly-trained veteran warriors, Mars’ best. They are ready to face whatever dangers threaten the Confederation. They are capable, dedicated, armed with the best technology Mars has to offer. And they don’t exist, at least not officially. Now the team will be called upon to face its greatest test. On a planet in a newly-discovered system there is a mysterious wreck, the remains of an ancient ship. The discovery is a momentous one, first contact and proof that mankind is not alone in the universe. It is a job for the Team, but even these crack soldiers will be tested to the limit of their abilities as they uncover the dark horror within, a technological nightmare that threatens the very future of humanity. The soldiers of Alpha will fight, ignoring the odds as usual, but this time they will be caught between two enemies. For they are not the only ones who know about the ruins. Even now, the notorious Gavin Stark and his Alliance Intelligence forces are on the move, seeking to seize the ancient vessel and the priceless technology within for their own purposes. And they are ready to do whatever is necessary to gain the priceless ship… including wiping out Red Team Alpha completely. 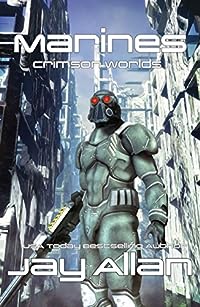 Erik Cain joined the Marines to get off death row. The deal was simple; enlist to fight in space and he would be pardoned for all his crimes. Marines In the 23rd Century, assault troops go to war wearing AI-assisted, nuclear-powered armor, but it is still warriors and blood that win battles. From one brutal campaign to the next, Erik and his comrades fight an increasingly desperate war over the resource rich colony worlds that have become vital to the economies of Earth’s exhausted and despotic Superpowers. As Erik rises through the ranks he finally finds a home, first with the Marines who fight at his side and later among the colonists – men and women who have dared to leave everything behind to build a new society on the frontier, one where the freedoms and rights lost long ago on Earth are preserved. But causes can be fleeting, imperfect things. Amidst the blood and death and sacrifice, Erik begins to wonder. Is he fighting the right war? Who is the real enemy?

Now Included: A sneak peek at Crimson Worlds II: The Cost of Victory. Read the first three chapters, immediately following the end of Marines in this Kindle edition. 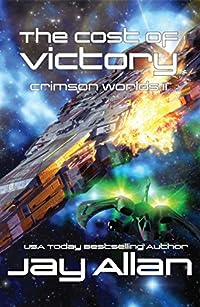 The Third Frontier War is raging, and all across human-occupied space worlds are burning. Massive fleets struggle for dominance and kilometer-long war ships exchange thermonuclear barrages. Battered in the early years of the war, the Western Alliance is resurgent. The brilliant Admiral Augustus Garret leads the Alliance fleet from victory to victory, taking the war to the very heart of the enemy empires. On the ground, Colonel Erik Cain, hero of the Marine Corps, leads his crack troops again into combat, seeking the final battle, while in the background, the secretive intelligence agencies of the despotic Superpowers plot and scheme, using their own soldiers as pawns in the great game for control of space. But the final battle will be fought in the reddish sands of a backwater world, and the prize will be the staggering secret that has lain hidden in a remote cave for untold centuries. All the Powers struggle for the ultimate victory, but at what cost?

The Cost of Victory is the second book in the Crimson Worlds series and the direct sequel to Marines. 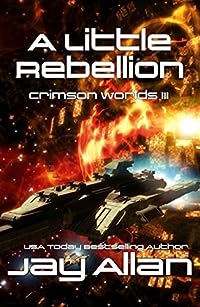 The Third Frontier War is over, and the Western Alliance is triumphant. All across human-occupied space, colony worlds celebrate the coming of peace. But peace is an elusive dream, and more trouble is brewing. The war was expensive, and the economies of the Superpowers, always fragile, are on the verge of total collapse. The Directorate, the shadowy intelligence organization that has become the true power behind the Alliance government, plans to strip the colonies bare to pay the costs of war. Already, they are tightening their control over the freewheeling colonial governments. And the Marine Corps faces total destruction at the hands of the worst traitor in its history. But the colonists are a different breed than the passive mob on Earth, and they have no intention of meekly surrendering their hard won freedoms. On worlds all across the frontier, plans are hatched and weapons hoarded. And in taverns and meeting halls the words of an ancient text are uttered in hushed tones. A little rebellion, now and then, is a good thing.