“Desolation” by Jesper Schmidt is the first book in the fantasy trilogy, “The Keystone Bone”. It’s not for the faint-hearted, but if you like fast-paced fantasy, with dragons, demons, and magic, then you will love “Desolation”. Get it today and experience a struggle like no other. 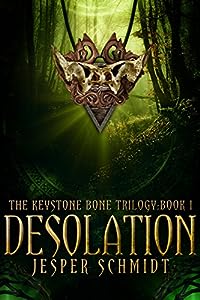 Just as Aea had finally found happiness in her troubled life, everything starts to fall apart. When she discovers that her sister, Isota, is still alive, Aea ventures to save her, well aware that every Duian who leaves the forest realm of Thaduin will inevitably catch a deadly disease, the Field Blight. Aea finds herself in a race against time. Arkum’Sul really wants nothing but to be left alone. Being the sole survivor of his race, and the son of a dragon god, makes such desires difficult to fulfill. Meanwhile, Ayida, another Duian, resides in the Bronze Tower, far north of Thaduin, where she has grown to become a powerful spellcaster. However, it requires all of her skills to heal herself of the Field Blight daily. This place is the heart of the Magio Order, a dominant organization of female magic-wielders, where Ayida has tried for decades to ascend from Apprentice to the rank of Sienna… and failed every time. As she makes another attempt, all goes horribly wrong. Will the world of Erisdün survive as ancient myths and reality become one?