Do you wish there had been a second season of Firefly? Do you love the irreverent fun of Guardians of the Galaxy? Have you ever wondered how Star Wars would have turned out if Luke and Obi-wan had ditched the rebellion to become smugglers with Han and Chewie? Then Black Ocean is the series for you! 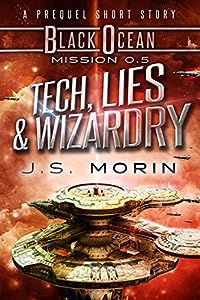 Getting caught between a local crime boss and a galactic syndicate makes you nostalgic for the rock and the hard place.

Carl Ramsey has a heist to run and the crew to pull it off. All he’s missing is a specialized computer and the tech to run it. But when an unrelated robbery loses him both, the prospects for a successful job look grim. Unfortunately the one who hired them won’t take excuses, and the owners of the computer come looking for their stolen gear. Caught between a local crime lord and thugs from a galaxy-spanning syndicate, Carl needs to come up with a plan that doesn’t get them all killed.

His assets: his retired marine ex-wife, a drunkard mechanic, a feline security chief, and an old family friend who happens to be a wizard. His liabilities: a missing computer, a hospitalized tech, two ruthless criminal organizations looking for answers, and about two hours to sort it all out.
… no problem. 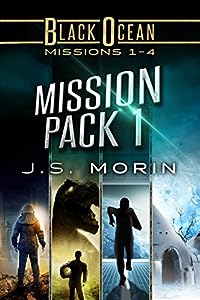 Science to build a starship. Wizardry to take it past light speed. A crew to give it a soul.

The Mobius is a cobbled-together ship with a matching crew. Captain Carl Ramsey is an ex-Earth Navy pilot whose crew won’t let him fly his own ship. The pilot is his ex-wife, the mechanic is a drunk, and the chief of security is from a predatory species. Instead of a star-drive to travel through the astral space between worlds, the ship’s wizard does it by hand.

Mission 1: Salvage Trouble
A salvage mission turns into a rescue, and no good deed goes unpunished. With two refugees onboard, the Mobius crew is hounded by bounty hunters, border partols, and corporate enforcers.

Mission 2: A Smuggler’s Conscience
“Don’t open the package.” It’s the smuggler’s credo for good reason. When the Mobius crew takes a peek at their illicit cargo, the entire job takes an about-face.

Mission 3: Poets and Piracy
The Mobius crew gets caught in a turf war between a pirate fleet and a galactic criminal syndicate. The trick is getting everyone out alive (and maybe getting paid in the process).

Mission 4: To Err is Azrin
Sometimes you can’t go home again. When a job takes the crew to their security chief’s homeworld, she gets dragged into a familial power struggle. Can the rest of the crew bail her out of an old feud gone horribly wrong?

Bonus Short Story: Guardian of the Plundered Tomes
Mordecai The Brown has been on the run from the Convocation for decades. How does a respectable wizard with a wife and two kids end up crisscrossing the galaxy in the company of outlaws? 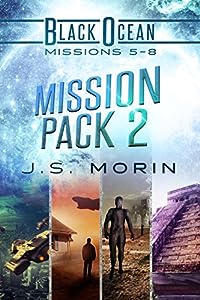 Just because every job we pull goes supernova doesn’t mean this one will.

Captain Carl Ramsey and the crew of the Mobius are constantly on the run from one bad decision to the next. Every time it looks like they might score big, something goes wrong. But no one ever got ahead by quitting, and the only alternative is honest work. There are always more jobs to pull, more schemes to hatch, and more authorities to evade.

A race contest turns into a heist when Carl can’t keep his greed in check. But will he be able to pull it off with billions of holovid viewers watching?

A relaxing getaway on a nostalgic colony sounds like a nice break for the Mobius crew. But easy living and keeping a low profile aren’t in their DNA.

Mort’s past catches up with him, and the crew of the Mobius are caught in the wizardly crossfire.

One of Carl’s old squadron mates has stumbled onto the location of a salvage prize unlike any the Mobius crew has ever seen: a lost Earth Navy battleship. The only problem is the survivors of the crash aren’t too welcoming of visitors.

For Esper Theresa Richelieu, it’s time to graduate from apprentice to wizard. But the final exam isn’t exactly what she had in mind. 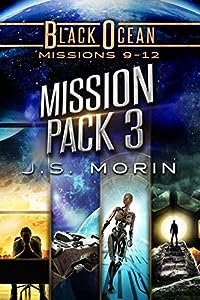 Being a criminal kingpin is more work and less fun than everyone makes it seem.

Carl Ramsey is the head of his own criminal Syndicate. With a hundred men and women and the resources of a tiny jungle moon at his disposal, life should have gotten easier, not harder. Infighting, politics, and a lack of income to pay everyone begin to tear the syndicate apart from the inside. And the last thing Carl needs is his father stepping in to try to help.

Mission 9: Adventure Capital
Carl sets out with some new recruits to earn some startup funds for his new syndicate. But when he discovers that his criminal enterprise doesn’t have enough criminals to run it, he goes to recruit some old friends.

Mission 10: Collusion Course
While Carl and the Mobius are stranded, dead in space, Chuck Ramsey steps in to handle the day-to-day operations of the syndicate. Can Carl get his ship repaired and get home while he still has a syndicate left?

Mission 11: You, Robot
Wizards are all convinced that any thinking robot would be a threat to life as we know it. Robots are paranoid that wizards are out to get them. When the Mobius comes across a robot claiming to be a wizard, they don’t know quite what to do with him. But there’s a wizard who does, and he’s not planning to play nice.

Mission 12: Stowaway to Heaven
With the aid of some inside information, the Mobius crew are ready to take on an old nemesis. Their goal: to infiltrate and hijack the Harmony Bay ship Bradbury.

Bonus Short Story: Voice of Reason
With Carl off being treated like a VIP, a job comes in for the Mobius. Roddy, Archie, and Yomin take on the assignment, but they have to manufacture a convincing impostor of Carl to do it.