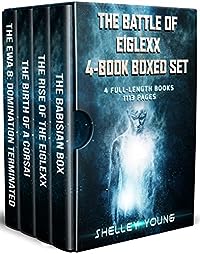 No one on Earth is prepared when the Babisianx arrive. Three minutes into the invasion electricity is no more, cell phones are no longer of any use, cars are easily spotted by the pictox on alien warships; planes in the sky drop without power, crash and burn; those on the ground won’t fly; military bases around the world are destroyed; government leaders are running like everyone else; most of Earth’s children have been abducted; and humanity is being wiped out in large numbers by a species that seem indestructible.

For the remaining people of Earth, there are only two alternatives: surrender and become a Babisian slave or run with no safe place to hide. One of those running is a certified genius named Ace Diamond Xiang. With him is one of Earth’s best soldiers, First Lieutenant Paul Szwedko, and an aviation specialist named Farzad Emir, and a woman with super clairvoyant abilities named Ericka Martin. Someone has paired this team together, and that someone might not be Fate. Together they discover the Babisianx haven’t come alone, but have brought with them other species as deadly as they are. Earth’s natural resources aren’t what the Babisianx are after. Their plan for coming is far more sinister. But Ericka and those with her are not deterred. Earth is theirs, and it’s time aliens throughout the multiverse became aware that there’s another species to reckon with, and that species is known as Man.

From Earth being thrown back into the Dark Ages, to food becoming scarce, to abandoned cities being turned into wild alien jungles, and alien trees planted on the surface of the ocean, to zombies being discovered in abandoned cities – zombies that can run fast, have far more intelligence than they should, and can turn others with a single bite. And these zombies aren’t just human. Other species are also turning and searching the streets to feed. With Ericka’s clairvoyance getting them out of sticky situations, her team runs until they must fight the final war. The Battle of Eiglexx. Species versus species.

Let the battle begin, and may Man live to brag about it for eternity. Not recommended for readers under 18.