To Live Forever: An Afterlife Journey of Meriwether Lewis is the second book in the Nowhere Series, a speculative blend of riveting suspense, forgotten history, and a dash of paranormal fiction. If you like edge-of-your-seat action, compelling characters, and white-knuckle emotion, you’ll love the latest installment in New York Times best selling author Andra Watkins’ page-turning series. 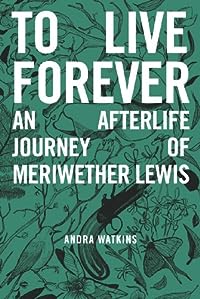 Merry Lewis died of two gunshot wounds more than two centuries ago. Was it suicide? Or murder? Because no one knows for sure, he’s stuck in an in-between called Nowhere. When he completes a Nowhere assignment, his soul will finally rest. But he’s failed every assignment, and he’s running out of time.

Merry’s last hope for redemption is nine-year-old Emmaline Cagney. Her mother has despicable plans for her tenth birthday, plans that will ruin Em’s life. She longs to run away and be with her father, but how?

When Merry finds Em hiding in a New Orleans alley, he realizes she is his final mission. But his old arch enemy has another horrifying scheme for her. As Em and Merry flee along the Natchez Trace, can they vanquish their mutual foe and find Em’s father before it’s too late?

Buy To Live Forever today and discover your next favorite read!