Now, I’m not going to spend all of my time talking about my baby bassets because not everyone wants to hear me go on and on about them, but I gotta ask this. Why is my oldest playing “Bouncy Ball in the Bucket” with the bucket he used when he was sick on Thursday? Ya, I cleaned it out, but seriously… BLEGH! My pup would never even think of doing that. Hold on, I’ll ask him. NOPE! He said that’s just not right. 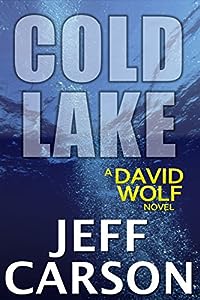 The truth emerges one piece at a time.

When a fisherman reels in a plastic bag containing a severed human head from the depths of Cold Lake, Colorado, Sheriff David Wolf and his deputies scramble to the scene, and quickly realize there are more surprises to be found below.

Their grim discoveries reopen a cold case Wolf’s father worked twenty-two years ago, and Wolf must try to succeed where his father failed before him. Wolf has the advantage on his dad, however, because he has bodies. Lots of them.

Amid sweeping political changes that have his department and the entire county on edge, Wolf and his deputies come to the disturbing realization there is a dangerous serial killer in their midst — one who will stop at nothing to remain hidden.

Can Wolf and his deputies unveil the truth before someone pays the ultimate price?

This fifth installment of the David Wolf Mystery Thriller series is chock-full of suspense, mystery, and action that will keep you glued to the pages through the final sentence.

For some, rebirth is not a reward.

Centuries ago the gods demanded Ashayna Stonemantle sacrifice her demon-tainted lover. She did, and then ended her own life, but it didn’t fulfill her obligations to the gods.

Reborn into a new body, Ashayna has no awareness of her former life until her sentient magic manipulates her into seeking out Sorntar, Crown Prince of the Phoenix. The majestic and charismatic Sorntar reveals that she is host to a Larnkin — a spirit creature of vast power. If she can trust the word of a man who is part avian, he is host to her Larnkin’s other half. When their Larnkins awaken early and force them into an unbreakable bond, Ashayna and Sorntar are accused of being corrupted by an ancient evil. To prove their innocence, they must discover what happened in the past to pit bondmate against bondmate. As the search for the truth draws them closer together, Ashayna realizes she’s falling in love with Sorntar. But before she can tell him, his tainted Larnkin enslaves him. The gods demand she kill her beloved, as she did once before, but she will not do it, even if it’s the only thing that will keep her soul safe from his darkness. 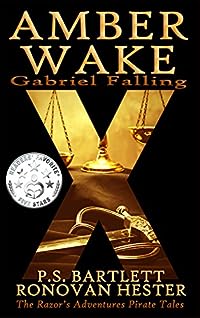 The autumn of 1705 brings Royal Navy Captain Gabriel Wallace to face an enemy within the ranks of the Admiralty itself that threatens his career, his reputation, his family, and something even more far-reaching in its plot.

With Admiral Chambers, the mastermind fearfully known as the Chambers of Hell, out for his destruction, the crew of his former command, the Majesty’s Venture, mutinies from the Royal Navy, and Wallace agrees to become captain once again.

Now a pirate by situation, Wallace sets out for the Colonies and the Caribbean. Will his crew remain loyal? Will his lifelong friend, Miles Jacobs, follow Wallace blindly? Finally, will the young Lieutenant Maddox Carbonale stay under the command of Wallace or have plans of his own?

With these questions in his thoughts, Gabriel Wallace wages war on Chambers and goes after the largest haul in the history of the Spanish Main.

If you love tales of adventure, of the sea, of the struggles of men, and nods to history, this is your book. Read Amber Wake: Gabriel Falling and you’ll have a new appreciation for all of The Razor’s Adventures Pirate Tales. 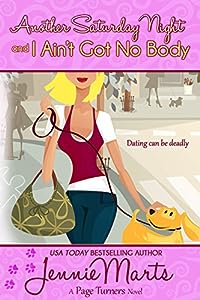 Sunny’s not sure she’s even looking for Mr. Maybe, when her friends decide to find her Mr. Right.
Sunny Vale considers herself a dog-loving, romance-reading, homebody. But her life goes from dull to deadly when her book club fires her from her own love life and sets her up on six blind dates- one of whom might be with a murderer. More trouble arrives in the dead of night, in the form of Jake Landon, a mysterious stranger, who breaks into her neighbor’s house and possibly her heart. But Jake is packing more than a loaded gun in his well-fitting Levi’s. He brings an arsenal of secrets and plenty of heat to Sunny’s ho-hum summer.
Jake Landon finds himself caught up in the capers of the sexy blonde in the house next door. But he has his own agenda which doesn’t involve playing hero to a curvy second-grade teacher and babysitting her panty-puking puppy. He’s got other problems like fiery explosions, a missing person… and a parade of jerks Sunny insists on dating.
Could Sunny’s Mr. Right be right under her nose? Even though Jake is gorgeous, likes her dog, and has abs she can crack an egg on, can she really go out with him if he’s just murdered her next door neighbor?

Women of all ages will enjoy this romantic comedy tale of humorous, women’s fiction, that also has a touch of cozy mystery in this small town love story. 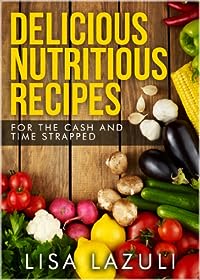 DELICIOUS NUTRITIOUS RECIPES: Lose weight, save money and get your five-a-day with these healthy and easy recipes.
by Lisa Lazuli

Good health is no lottery. More veggies, more fibre and less fat in your meals can help you stay fit and live longer, healthier lives.

*All measurements in imperial and metric*

We are constantly be told by the media to:
Eat less salt Eat less sugar Eat less fat Eat less… period!
And it has been well documented that eating five or more fruit and vegetables a day is vital for good health.
But life is so hectic, we are always in a rush and so how do we do this?

The easiest way to reduce salt, sugar and fat is to cook meals yourself. Pre-prepared meals and processed foods are filled with bad fats, sugar and salt and if they say “LOW FAT”, then they are bound to have twice the sugar. Home cooked meals have a higher nutritional value, less salt, sugar and fat.

Plus, many of us have food allergies or may be gluten intolerant and so we need to know what is going into our meals.

So the purpose of this book is to give you recipes rich in vegetables and nutritional value and so you can be sure you are getting five a day at least. All my puddings contain at least one fruit as well.

The meals are delicious and fail safe, even kitchen novices can succeed.

The majority of meals freeze and keep well for the next day and so once you have made the effort you have a meal ready for another day or even two – this is where you can save time and money while still eating well.

Great for first timers as well as I keep all measurements simple and so as long as you have a pot, a frying pan and an oven proof dish you can make these meals.

There are 7 soups and 14 scrumptious salads; ideal for dieters and so packed with nourishment they can be had as a meal on their own.

Chicken, fish, meat and vegetarian dishes are included. Often I include vegan options. All soups, salads and many more meals are vegan or can be vegan adapted.
There are treat meals for the weekend and also inexpensive meals.

Go ahead and enjoy your food – love eating and be healthier at the same time.