This top-rated mystery-thriller series is on sale for a limited time to introduce you to the wildly popular Detective Jack Stratton Series from Wall Street Journal bestselling author Christopher Greyson. Greyson’s novels weave a tale full of mystery and action with humor and suspense. His unique stories and no-nonsense style of writing will take you on a page-turning roller coaster ride of emotions right up to the end. Enjoy! 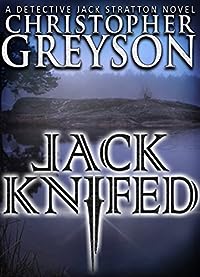 Jack felt the familiar burn of shame in his chest.

Why do I keep doing this… thinking about her? It was so long ago, but I can’t get what happened out of my head. I shouldn’t let any of that junk define me, but I still do. I’m driving in circles, caught in some loop that I can’t break out of. I want to know why she abandoned me… but some things, I guess, I’ll never know…

Handsome police officer Jack Stratton is the “hometown hero cop with a heart of gold.” Constant nightmares have forced him to seek answers about his rough childhood and the dark secrets hidden there. With Alice (aka Replacement) by his side, Jack travels to Hope Falls to solve a murder that occurred before he was born. Everyone in the small town remembers the unsolved murder of Steven Ritter, but after 27 years, no one thought that someone would look into it–but they don’t know Jack.

Jack Knifed is part of the Detective Jack Stratton Mystery-Thriller Series which has more than 3,000+ five-star reviews and 900,000 readers and counting. If you love a page-turning thriller with mystery, humor, and a dash of romance, pick up Jack Knifed today. 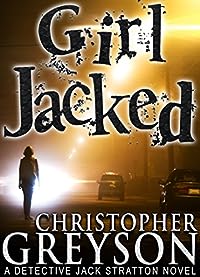 Jack Stratton’s a good guy on the ugly side of life. Eight years ago a bomb blew his world apart and he’s been picking up the pieces ever since. Guilt has driven a wedge between him and the family he loves. When Jack hears the news that his foster-sister Michelle is missing, it cuts straight to his core. The police think she just took off, but Jack knows Michelle would never leave her loved ones behind — like he did. Forced to confront the demons from his past, Jack must take action, find Michelle and bring her home… or die trying.

This runaway hit mystery series introduces us to handsome rogue Jack Stratton. Driven by a debt of honor to his fallen foster-brother and a deep need to protect his vulnerable, yet feisty sidekick, Jack must dive into a world full of deception and lies. But in the sleepy community of Darrington, nothing is as it appears to be. Navigating the quirky characters that hold the answers to their foster-sister’s disappearance, these two underdogs must put aside their differences and fight back-to-back if they are to save Michelle. As Jack’s world continues to crumble, secrets from his past drag him down. Following a trail that has grown cold, Jack must tread carefully to protect his job, his family, and his own life.