A Chick To Remember

The sun came out yesterday and it was a beautiful warm day, so of course I was out in the garden planting this seasons veggies and flowers. For the first time I am trying out red onions, garlic, snap peas, and carrots. I will have a tomato plant, but I will get that guy later. I mixed in some Morning Glories into the snap peas for a bit of a dramatic effect. Oh BOY! Listen to me!! I will be absolutely thrilled if this turns out half as good as I hope. I am going to fight the urge for pumpkins, since it is always a bust for me, but just saying the word pumpkin is putting me in the mood to plant at least one. I have been pretty bad about updating my Pinterest page with pictures, but truth be told, when it’s cold out I spend a lot of time indoors hibernating. I am pretty sure you don’t need to see that. OH MY! She is doing dishes and eating cake in a grey robe and fuzzy slippers… AGAIN! But now the sun is out and I took a few pictures of my lovely ladies, kitty and pup all enjoying the garden with me yesterday. You can check out those pics on my Pinterest boards titles My Sweet Chickies, and In the Garden by clicking here. I will keep posting new pics as long as the sun shines. 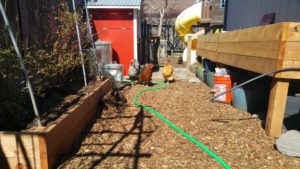 LOOKOUT KITTY! There is a gang of chickens sneaking up on you. 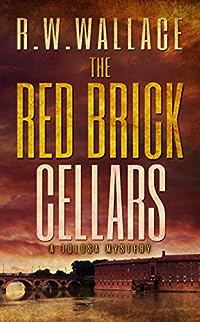 The Red Brick Cellars: A Tolosa Mystery
by R.W. Wallace

A murdered mayor. A second body reduced to skeleton and dust. Their public display so horrific that the police are baffled.

Everyone assumes uninterested heir Louis Saint-Blancat will finally settle down and focus on the politics of Toulouse, France. Louis becomes the center of attention in the press as his mother and sister pressure him to follow the family’s political tradition, while all he wants is to track down his father’s killer and return to his globe-trotting lifestyle.

Determined to ferret out the story behind the perplexing assassination that took place at the very center of Toulouse, struggling English journalist Catherine Marty finds an unlikely ally in Louis.

Will the two sleuths discover what is lurking beneath the apparent congeniality of la Ville Rose? 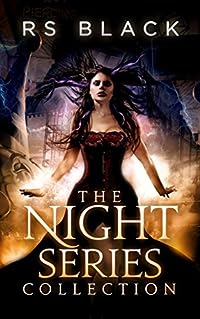 Books 1 and 2 of the COMPLETED Night Series

Welcome one and all to Carnival Diabolique- or what I affectionately like to call, the carnival of the damned. My name is Pandora, and though my face might not look familiar to you, you do know me. I’m a Nephilim. What does that mean? I’m half demon, what’s my other name? Lust. I’m the dark craving that drives you mad, makes you want, makes you reckless and stupid. I’m the drug you’ll do anything to get your hands on. But I’m not all bad. I fight for light, for goodness and truth. I love my job, killing vampires and werewolves, zombies, and freaks… it’s what makes me happy. But people are starting to disappear and lately I’ve felt a dark presence lurking around me. I think it might be a death priest and that’s really bad. There isn’t much a demon like me fears, but I fear them. This should have been easy, me killing the fanged freaks, getting rid of my pesky priest problem, but I’m about to be betrayed by the one person I thought I could trust with my life and before the night is through I’ll be covered in crimson…

Secrets and truths, lies and red herrings… which is which? That’s what Pandora’s trying to figure out. Ever since the death of her best, and probably only friend by her own hands, she’s not sure who to trust anymore. The Priest is dead. The Gray Man is… she’s not even sure what. Luc, well, Luc is Luc.

The Order has sent her deep into the heart of Mexico to investigate a potential zombie uprising. She arrives at the start of the Dia de los Muertos festival — a celebration for the dead and immediately things don’t feel right to her. For one, bodies (the living kind) keep disappearing. They’re not being kidnapped, no, if only things were that simple. Literally there one second, gone the next, she’s not sure what to make of it. On top of that mum’s are floating all over the place. Is that merely symbolism associated with the festival, or is it a clue of something far more sinister?

In this explosive sequel to Crimson Night, an old ally returns and a shocking truth is revealed. One that will turn her investigation into The Order’s duplicity on its head and make Pandora question everything she ever thought she knew… 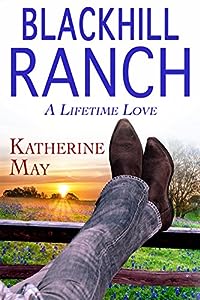 Blackhill Ranch: A Lifetime Love
by Katherine May

When Lexi Silverton returns back to her family ranch for the summer, she is mesmerized by her brother’s gorgeous best friend. She knows first hand how dating a sibling’s friend is dangerous, but how can she say no?

Rhet Morrison is a homegrown farm boy who has a past of horrible tragedies, but he is prepared to give Lexi a summer she will never forget.

Will these two have a summer fling, or have they found their lifetime love? 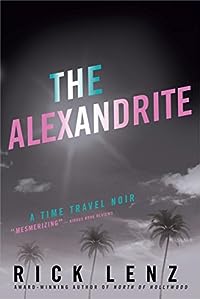 The Alexandrite: A Hollywood Time-Travel Noir
by Rick Lenz

Is sleeping with Marilyn Monroe worth getting murdered again?

When Jack Cade, a down-and-out aging Hollywood actor, is fired from a no-pay production of Hamlet, he has no inkling his next role will be opposite Marilyn Monroe – only forty years back in time, in the year 1956.

An award winning time-travel noir that slips between the shimmering worlds of modern and mid century Los Angeles show business.

After Jack’s wife leaves him, he receives an invitation from a mysterious woman to her old mansion deep in the San Fernando Valley. Jack steps through her door and into a world of beguiling physics, magic and travel in time. Through a dark whirlwind of events, he meets Marilyn, gets killed (more than once) and emerges with the alexandrite ring – a jewel that will change his luck and destiny.

How many lives will he have to blow before getting it right?

After NORTH OF HOLLYWOOD, Lenz’s award-winning memoir about show business and addiction, comes another enchanting novel written with a sure hand and a knowing eye. Kirkus Reviews called this genre-bender a “mesmerizing story.” Indead, The Alexandrite is a bold, kaleidoscopic novel that glimpses at Hollywood’s past and present through the lenses of time travel, hypnotism, gemology and Marilyn Monroe’s haunting blockbuster “Bus Stop”. 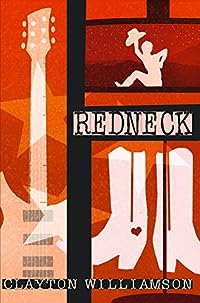 Reggie Dunn doesn’t believe in God anymore. He isn’t angry or anything, as he’s a young, married guitarist from Tennessee with a penchant for profanity. However, he hides this change from his beloved songwriter wife, who’s rooted in Southern religion and wants nothing to do with non-believers. But as they close in on music stardom alongside a charming stranger, Reggie’s new truth longs to come out, and he’ll have to fight through a hurricane of hypocrisy and public nudity in order to hold on to his darlin’ wife.