In a virtual reality, Artificially Intelligent beings fight to survive in their desolated world. What happens when they realise it’s all just a game? London’s Evening Standard describe the novel as “A rip-roaring sci-fi thriller and chilling imagining of the future of Artificial Intelligence”. 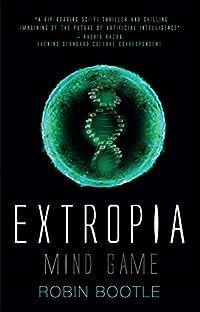 An act of sabotage leaves Edward’s father trapped inside a virtual reality game, Extropia. In a desperate bid to save his father, Edward follows him, entering a world he knows he might never leave. A world full of artificially intelligent beings; beings subjected to a life of misery and fear in the name of human entertainment. Now one of them has found out about the real world and is determined to have his revenge…

“Robin Bootle has given the devil an update and located him in cyberspace. A rapid plot with intriguing twists and turns.” Brian Keaney, Jacob’s Ladder.