Step into the sexy world of the Bane brothers in this first installment of the Gothic Angels series by author Ashur Rose. This is a full, standalone novel. 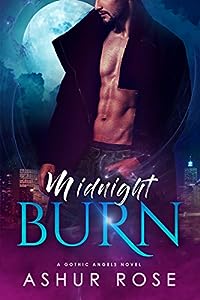 In downtown Chicago, the statues come alive at night…

Accused of mutiny, the Bane brothers, former Watchmen of the Empyrean realm, are banished to Earth to prove their worth before they can return home. But none of them are feeling the effects of their punishment more than Iain.

A half-breed, Iain has two choices if he wants to survive his new home: feed on the essence of shades, the underlings responsible for slaughtering his people, or find his pure. He’s almost lost his appetite for both when his pure finally crosses his path. She’s smart, powerful, and–from the moment he senses her–destined to be his.

Barely able to make ends meet, strip club waitress Lilith Harper has problems of her own. Big problems. Hunted by the beings responsible for killing half of Iain’s race, Lilith is in no rush to trust the handsome, assertive stranger. But even that doesn’t stop the fiery temptation she feels to be with him in every way.

Their feelings for each other burn hot too quickly and threaten to ignite the walls Lilith has erected to protect herself. There’s no room to let her guard down, not even for a man willing to sacrifice himself to protect her from the demons that breathe down her neck around every corner.

But neither Lilith nor Iain will be able to control themselves after their soul-shattering first touch.