Pushed To The Limit

Fans of author Sandra Ulbrich Almazan have called her novels “extremely entertaining,” and “a fun, fast-paced ride.” Find out for yourself what all the buzz is about. Enjoy! 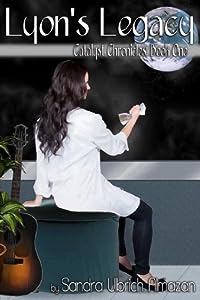 Sometimes being a geneticist isn’t enough to understand your family…
Joanna Lyon is the great-granddaughter of the legendary TwenCen musician Sean Lyon. She may have inherited her ancestor’s musical talent, but her parents’ bitter divorce and her Uncle Jack’s attempts to remake her into another Sean have left her hostile toward her family and music. Her passion is for science, but since she has no access to the family funds, she struggles to earn enough credits for graduate school. Then her uncle sets up a business deal with her employer to make Joanna go on a mission for him: travel via the spaceship Sagan to an alternate TwenCen universe where Sean is still alive in Chicago, 1962. Joanna must collect a DNA sample from Sean so her uncle can create a clone of him. She refuses at first, but finally agrees to go. Secretly, however, Joanna believes her uncle will exploit the clone, and she plans to sabotage the project to stop him. But when she falls in love with one of the scientists in the Sagan’s genetics lab, clashes with other time travelers who fear she’ll change how history develops on the alternative TwenCen Earth, and receives devastating personal news, Joanna will find herself pushed to her limit even before she comes face-to-face with her hated ancestor. Their encounter will leave her changed forever. Will she still be able to thwart her uncle’s plan, and what will she have to sacrifice to do so? 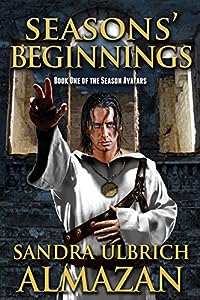 Kron Evenhanded is an artificer, able to enchant any man-made object, but he finds people more difficult to work with. After many years studying at the Magic Institute, he leaves to return to his childhood home. When he visits the city of Vistichia, he encounters Sal-thaath, an extremely magical but dangerous child created by Salth, another magician Kron knew at the Magic Institute. Kron attempts to civilize Sal-thaath, but his efforts lead to tragedy. Salth, who has gained additional magic from the stars, vows revenge against Kron and his beloved Bella. Kron is forced to ally himself with a quartet of new deities and their human Avatars, including Bella. Kron must help the new Avatars defend Vistichia as Salth attempts to drain its life and magic. But Salth has Ascended halfway to godhood over Time. Will Kron’s artifacts be enough to protect the city and the Avatars, especially the woman he loves, or will Time separate them? 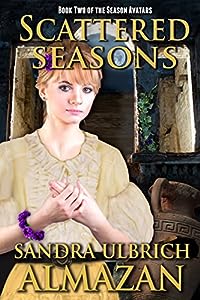 Lady Gwendolyn lo Havil is an Ava Spring, born to heal others and lead the Season Avatars of her generation. Season Avatars with divine magic must work in groups of four to save the country of Challen from Chaos Season, times when all of the seasons appear at once. When the current Ava Spring dies in a riding accident, Gwen must find the other three Season Avatars she will link with. But two of them are missing, and with Gwen’s own magic crippled by a cursed pottery shard, she will have to use all of her skills to find the Avatars scattered across the country of Challen. During her journey, she meets a stranger who claims to know the shard’s origin. Is he truly an ally of the Season Avatars, or is he trying to stop them from uniting? 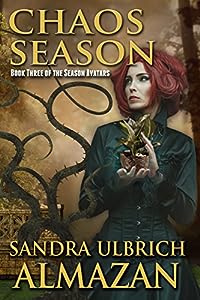 Jenna Dorshay t’Reve isn’t your typical farmer’s daughter. Blessed with plant magic, she’s been impatiently waiting to take her place as Summer Avatar of Challen. All she and her sister Season Avatars have to do is tame a Chaos Season, a magical weather storm sent to Challen by a wrathful demigoddess. They’ve done this many times in other lives, but now dangerous plants resistant to Jenna’s magic make Chaos Season worse. Even the assistance of the War Avatar, father of Jenna’s child, may not be enough to stop the plants. Before Jenna can conquer the deathbushes and tame Chaos Season, she must fully link with the other Avatars in her quartet, but to do so means revealing a secret that can tear them apart. 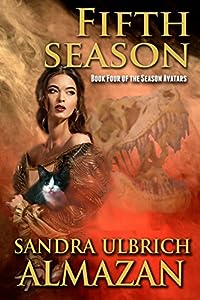 Ysabel became the Goddess of Fall’s Avatar to care for animals, but her kind heart may prove fatal to her loved ones.
When a pair of strange animals, part bird and part lizard, invade the country of Challen during a magical weather storm, Ysabel must learn if they’re ordinary creatures or if they’re connected to Salth, the Season Avatars’ sworn enemy. However, the clawfeet, as she calls them, are resistant to her magic.
After tragedy strikes the Avatars, Ysabel comes up with a desperate plan to allow all twelve of them to face Salth together as required by the Four Gods and Goddesses of Challen. Jealousy, however, tears an ally from the Avatars during their most vulnerable time as even more beasts rise against them. If Ysabel cannot control the strange animals and use justice as well as mercy, she will not only lose her position as Avatar but the people she loves.