A good way to start the day on a Sunday morning is by watching a video of a dolphin asking a scuba diver to pull a hook out of his flipper. Thankfully there are no shortages of heartwarming videos on the internet, so if dolphins aren’t your thing, you can always search for turtle, dog, even flamingo videos that will warm your soul, and get your day on the right path. So now that I have started my day off right, I must stay off the internet completely for the rest of the day because you know the next video that pops up will be horrible. Rest assure you will never see me writing about puppies getting kicked or any other bad news. 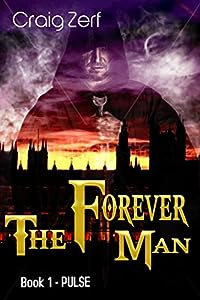 The world, as we know it, has ended.
One man stands resolute. A man who has been trained in the savage arts of war. A man who lives his life according to a creed. A simple man who wants none of the power thrust upon him. This man is Marine Sergeant Nathaniel Hogan, seconded to the American Embassy in London and, although he does not know it, he is – The Forever Man.
The first pulse occurred in the old calendar year of 2022. A sequence of gigantic solar flares created a series of massive electromagnetic pulses that stopped the heart of our modern world and returned us to the DARK AGES.
Tens of thousands died within the first few hours as airplanes fell from the skies, hospitals ceased to work and every form of modern transportation ground to a halt.
Within days the death toll had reached the hundreds of thousands. Fires raged unchecked through the cities, water supplies ran out and survivors turn on each other as mob rule surpassed all else.
And Nathaniel finds that he has been changed by the huge amounts of Gamma radiation in the solar flares. They have enhanced his natural abilities, giving him increased speed, strength and healing. Indefinitely extended his life span and enabling him to be able to draw on the power of the solar flares to create magik.
But even The Forever Man was not prepared for what happened next, as the ongoing flares tore a hole in time and space, creating a gateway through which ‘they’ appeared. From the realms of fantasy came the orcs, the goblins and, leading them all – the Fair Folk.
Were they here to help – or to conquer?
The ultimate Dystopian superhero. 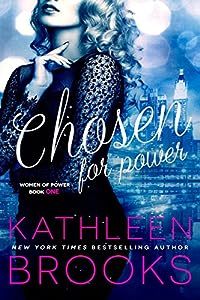 Chosen for Power (Women of Power Book 1)
by Kathleen Brooks

Somebody is out to destroy Elle Simpson and everything in her life.

Elle has always depended on family to make her business run strong, but long work hours have left her without much of a private life. Just as Elle thinks she has met the potential man of her dreams, she also discovers an imposter determined to destroy her business and life. Can she trust this “Prince Charming” to help her defend everything she holds dear, or will she only leave herself vulnerable at the worst possible time?

Drake Charles’s work in the fast-growing mobile technology field made him a wealthy, powerful man. But he quickly sheds the fame and publicity for a more private life that earns him the label as a man of mystery. Drake adds to that mystery every year when he hosts a masquerade ball for charity. It’s also his best chance to find the one thing he really wants… true love.

Having met behind masks of anonymity, Elle and Drake enjoy a whirlwind night of romance that leaves them both wanting more. Elle’s heart tells her to trust Drake, but years of fighting off business foes has taught her that anyone could be a potential threat. Will this new romance give them both a fairy tale ending, or spiral into a nightmare for the whole Simpson family? 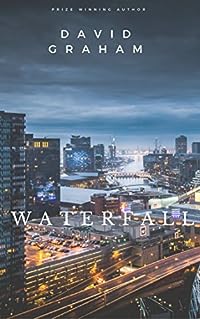 Faced with an uncertain future, Luke Weaver cannot believe his luck when he is able to parlay his new-found and distinctly perishable celebrity into a role as spokesperson for the high-profile charity ENABLE.

Soon, Luke is working the glamorous fund-raising sector, moving in distinguished company and finding doors being opened to him.

But there is more to ENABLE and its mission than meets the eye. People have died to keep its secrets and it is not long before Luke finds himself in deadly peril from the dangers which lie at the charity’s heart. 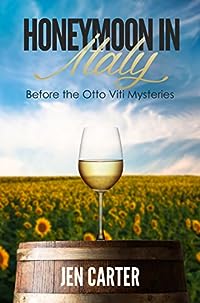 Honeymoon in Italy: Before the Otto Viti Mysteries
by Jen Carter

Not all Otto Viti stories are about dead bodies…
When Jill D’Angelo agrees to join her two sisters on an Italian vacation, she only hopes the three of them can go the whole week without driving each other crazy. Little does she know that the getaway will be full of traveling mishaps and uncovered family secrets. But the biggest surprise of all?

(Before the Otto Viti Mysteries: a Prequel Novella with Light Mystery) 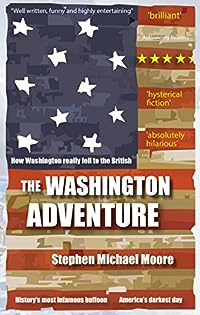 Review.
‘William Peel is a brilliant character, an aristocratic buffoon – so wealthy he is beyond reproach, and lacking any self awareness, he makes for a superbly comic protagonist. This is a brilliant example of the historical comedy genre’ – Harper Collins

The Washington Adventure is a Gold Medal winner on Harper Collins’ international book platform, Authonomy, ultimately reaching No.1 in their chart. At the time of reaching the coveted ‘Editor’s Desk’ it was the highest rated comedy on the site and amongst the highest rated books of all time.

It was rated 4.5 / 5 by hundreds of Authonomy readers with reviews such as… ‘well written, funny and highly entertaining’, ‘brilliant’, ‘comic genius’, ‘hysterical fiction’, ‘absolutely hilarious’.

Synopsis:
Set in 1814 amidst the British and American war, The Washington Adventure follows the story of legendary pompous idiot, William (Lord) Peel of Tornbridge, the inept financier who arrives on the east coast of America with a ship full of gold and slaves and hopes of clinching a lucrative land deal.

With British forces stretched by the never-ending war with Napoleon, President Madison has chosen his moment to strike and needs gold for weapons and slaves to complete the country’s new capital, Washington. Unbeknown to William and Madison, however, Europe’s war with Bonaparte has ended and four thousand battle-hardened veterans – Wellington’s Invincibles – have been dispatched across the Atlantic with orders to Raise Hell. By the time William arrives in Chesapeake Bay it isn’t the welcoming embrace of the President that greets him but the British poised for invasion.
Based around true events, The Washington Adventure follows a chain of catastrophes that sees William’s slaves being taken by the British to fight the Americans and ends with him being blamed for the destruction of the White House as the new capital is obliterated in a single night.

Taken from William Peel’s own journals and corroborated by the Tornbridge Museum, The Washington Adventure gives an unparalleled glimpse into one of the most extraordinary events in Anglo American history; not to mention finally opening up the bizarre and inane world of one of Europe’s most influential buffoons.