The Singularity Series by Susan Kaye Quinn, is a new young adult science fiction series that explores the intersection of mind, body, and soul in a post-Singularity world… and how technology will challenge us to remember what it means to be human. 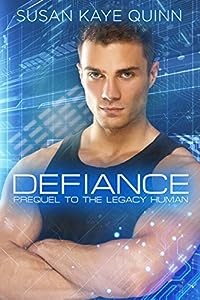 Most of humanity has ascended into hyper-intelligent human/machine hybrids, but legacy humans like Cyrus Kowalski are used to skirting the laws they’ve laid down — after all, he knows the ascenders only pretend to care about the legacy pets they keep. But when a woman Cyrus loves like a mother is stricken by a disease the ascenders refuse to cure, he has to decide how far he can go without getting banished from the legacy city that’s always been his home.

Defiance is a prequel novella to the first book in the Singularity series, The Legacy Human. 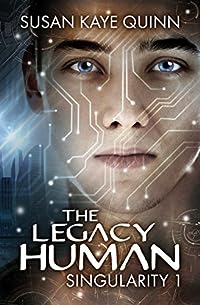 What would you give to live forever? Seventeen-year-old Elijah Brighton wants to become an ascender — a post-Singularity human/machine hybrid — after all, they’re smarter, more enlightened, more compassionate, and above all, achingly beautiful. But Eli is a legacy human, preserved and cherished for his unaltered genetic code, just like the rainforest he paints. When a fugue state possesses him and creates great art, Eli miraculously lands a sponsor for the creative Olympics. If he could just master the fugue, he could take the gold and win the right to ascend, bringing everything he’s yearned for within reach… including his beautiful ascender patron. But once Eli arrives at the Games, he finds the ascenders are playing games of their own. Everything he knows about the ascenders and the legacies they keep starts to unravel… until he’s running for his life and wondering who he truly is. 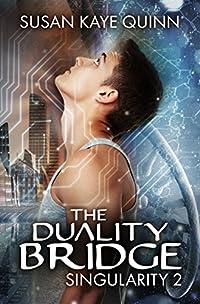 What does it mean to be human?
Elijah Brighton is the face of the Human Resistance Movement. He’s the Olympic-level painter who refused an offer of immortality from the ascenders — the human/machine hybrids who run the world — in solidarity with the legacy humans who will never get a chance to live forever.

Too bad it’s all a complicated web of lies.

Worse, Eli’s not even entirely human. Few know about the ascenders’ genetic experiments that left him… different. Fewer know about the unearthly fugue state that creates his transcendent art — as well as a bridge that lets him speak to the dead. But the Resistance is the one place he can hide from the ascender who knows everything the fugue can do. Because if Marcus finds him, he’ll either use Eli for his own nefarious purposes… or destroy him once and for all. 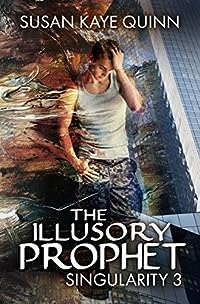 What if you could paint with reality?
Elijah Brighton can bring a girl back from the dead, travel outside his body, and absorb a lifetime of memories from anyone he touches in the fugue state. Everyone seems to think he’s the prophet they’re waiting for… including the girl he’s falling in love with. The truth is, the fugue is bleeding over into reality, bringing his sketches to life and haunting him with visions of a girl in metal armor. She stabs him with her blade and denounces him as any prophet worth the name — and it’s not like he disagrees.

People who change the world generally aren’t losing their minds.

He just wants to hide out in his tent and kiss Kamali, but a vision of his death and an attack on the Human Resistance Movement convince him something bigger is coming. Maybe Augustus — the power-mad ascender he barely defeated. Maybe the Makers, a tinkering cult with their own kind of ascendance. But when his best friend Cyrus disappears, questions of destiny and prophethood will have to wait — because the fugue is always showing a version of the truth, and Eli must discover that truth before his terrifying visions become reality.

The Illusory Prophet is the third book in the Singularity series.