The Destiny Of All

A deadly alien virus spawns an epidemic. Predators attack Europe. And a clandestine organization conspires to profit from chaos and forge a New World Order. The heart-pounding H.A.L.F. series by Natalie Wright has something for everyone: exciting action scenes; great, complex love stories; fascinating new aliens; and relatable teen characters fighting to save the world and find their places in it. Enjoy! 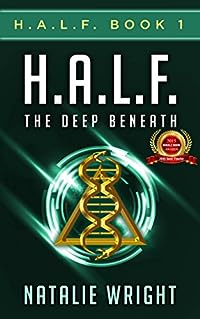 H.A.L.F.: The Deep Beneath
by Natalie Wright

Can a Human-Alien Hybrid, Created to be a Weapon, Save us from a Secret War we Don’t Know is Coming?

H.A.L.F. (Human Alien Life Form) #9 is the product of genetic engineering, the union of human and alien DNA. Created to be a weapon in a secret war we don’t know is coming, he proved too powerful to control. He has lived for seventeen years in an underground lab, sedated and trained to be a cold-blooded killing machine.

But H.A.L.F. 9 has escaped the lab and the sedation has worn off. He has never been more alive. More powerful. Or more deadly.

While H.A.L.F. 9 revels in his newfound freedom, Erika Holt relaxes in the desert with friends. But a typical Saturday night soon erupts into chaos when fate brings her together with H.A.L.F. 9. Erika is forced to make a choice that will irretrievably change her life. If she chooses to help H.A.L.F. 9 escape, her fate will become intertwined with his in what will become an intergalactic adventure. Little do any of them know that their actions trigger a vast New World Order conspiracy which began after the UFO crash in Roswell in 1947. Will H.A.L.F. 9 be reeled back in, once again forced to do the bidding of the Makers? And will any of them survive the dangers of The Deep Beneath them? 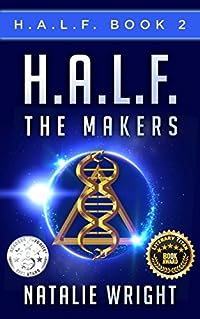 H.A.L.F.: The Makers
by Natalie Wright

You’ve seen the aliens known as “the Greys” in movies and on T.V. But what if everything you think you know about them is wrong?

And what if the Greys are only the beginning?

On a nondescript planet on the far side of the galaxy, the M’Uktah have evolved from a wolf-like predatory creature into a highly advanced species that has mastered intergalactic travel. They are cultured. Refined.

Wright’s epic and much anticipated follow up to her multiple award-winning debut Sci Fi novel H.A.L.F.: The Deep Beneath 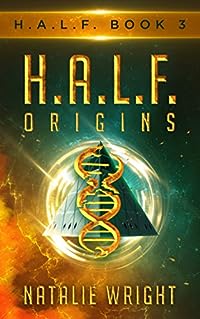 Alien predators attack Europe. A deadly virus spawns an epidemic. And a clandestine organization conspires to profit from chaos and forge a New World Order.

In this heart-pounding finale of the award-winning H.A.L.F. series, Tex, Erika and the rest are in a race against time. For months they’ve fought for their lives. Now they battle to save us all.

Tex and Erika are fugitives again, running for their lives. But when Tex falls gravely ill, a Navajo healer is his only hope for survival. Tex emerges from the ordeal changed in body and mind but with vital information: how to stop the predatory M’Uktah from destroying those he has come to love.

Erika Holt seeks a respite from the constant threats to her life but she’s not about to give up. As she and Tex launch a mission to shut down the galactic highway used by the predatory M’Uktah, she grows closer to her troubled half-human companion. But what about her on-again, off-again boyfriend, Jack?

Jack Wilson, with his new friend Anna Sturgis, is determined to put an end to the Makers’ schemes for world domination. Complicating matters, an anti-viral that could save millions from an alien virus has been stolen.

As both alien and human forces line up against them, the destiny of all mankind is hand the hands of these young warriors. And time is running out.