Can The Hedgehog Really Talk?

A dark comedy trilogy about a paranoid schizophrenic and his friends, including a telepathic hedgehog. If you are looking for a book that you won’t be able to put down, that you have to read just one more chapter than look no farther than author Jonathan-David Jackson, and his Paranoia book series. Enjoy! 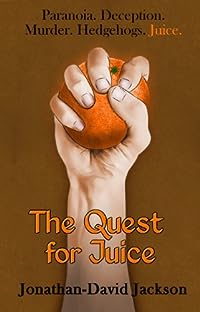 The Quest for Juice (Paranoia Book 1)
by Jonathan-David Jackson

Oscar has always lived a life of quiet paranoia, but now everything is changing. Suddenly, the bus is frequently late, his housekeys won’t fit in the lock, and someone has taken his juice, which was the one thing holding his life together. He strikes back against the people behind it all, but when he strikes too hard an innocent man ends up dead, and Oscar ends up in jail, diagnosed as a paranoid schizophrenic and facing life in a mental institution. On his journey to mental health and the truth, he has to make hard decisions about medication, trusting his own mind, dating a nurse, and whether that hedgehog can actually talk. 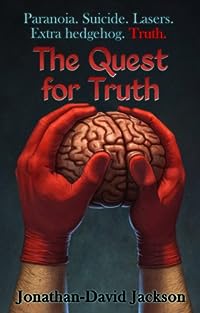 The Quest for Truth (Paranoia Book 2)
by Jonathan-David Jackson

Oscar’s orderly paranoid world has been turned upside down by the Red Fist Army and he now lives in exile. With the help of Penelope, Jim, and Mr. Hodge the hedgehog, he must free their hostage town, take on the Red Fist, and discover the truth about Dr. Boggs.

However, when things go wrong and Oscar loses his closest friends, he has to rely on an unlikely group of refugees with surprising mental abilities. As he continues on his journey to freeing the town and himself, he finds out more of his own truths than he ever imagined, and absolutely nobody shoots lasers out of their eyes. 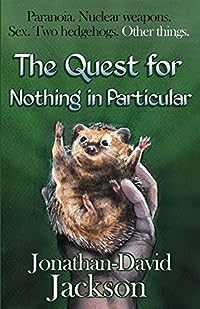 Oscar isn’t looking for anything, since he has just about everything he could want. A wife. A house. A hedgehog that isn’t trying to gnaw his face off. But their life of comfort lived under martial law is disrupted when the Red Fist Army suddenly disbands and a nuclear weapon goes missing, leaving it up to Oscar and his wife Penelope to save their town.

Along the way they receive help and sometimes hindrance from one or possibly two hedgehogs, a shotgun-wielding preteen, and a Russian veterinarian, and Oscar finds much more than he was ever looking for, including being beaten practically senseless, his archenemy Ron in case you forgot that guy, fatherhood, muggings, burglary, buggery (actually I think he was looking for that), rats in charge of society, demonic possession, and at least one nuclear explosion.