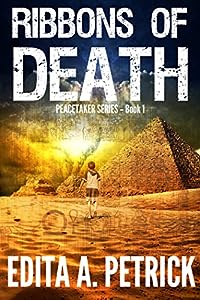 A career soldier who survived a deadly riot in Cairo, and a reclusive mythology expert from Montana, race against time to find the product of legends that’s cutting a bloody path across the continent.
***
One snowy evening, a stranger with a horribly scarred face stomps on the porch of Stella Hunter’s house, holding her latest book of myths and legends. He points to the bloody fingerprints of the book’s now deceased owner, marking a passage of the Peacetaker myth. When she asks how he came by the book, he tells her he took the controversial book from the lifeless hand of a traffic fatality in Cairo. And suddenly, Stella could swear that somewhere a clock started ticking down to doomsday. After all, the fate of humanity depends on whether she was right or wrong when she wrote her infamous book.

In this fast-paced, action packed adventure, nothing is as it seems and everyone Carter and Stella come across, seems to be wearing a mask… that seldom remains in place long enough for Carter to figure out whether they’re facing a friend or foe. 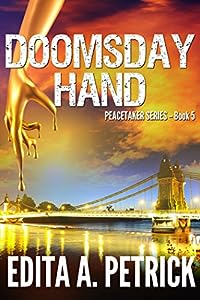 What starts off as a dreadful murder in London soon becomes a race against time to save humanity.

Five years ago, Dr. Stella Hunter wrote a controversial book about the ancients who believed that once in a Blue Moon a child with Peacetaker powers is born. Such child, when grown to maturity, can seed murderous madness in people’s minds by merely walking amongst them. A simple amulet activates the Peacetaker’s powers. Stella’s book was meant for the academic world. It brought her not only unwanted notoriety, and a young boy she subsequently adopted, but a new partner into her life; someone who would be the least likely companion for an academic obsessed with ancient myths and legends. Someone who’d never think that just by measuring his hand against a palm imprint on a piece of paper had the potential to doom not only him but humanity.

Less than three months into Stella’s one year guest professorship in London, her husband, retired FBI consultant, Timothy Carter, runs into an old friend while catching a taxi. It’s raining and both parties are late for their respective appointments. They make a lunch date for the next day but that meeting never happens because mere hours after meeting his friend Gregory Semple, Carter discovers he’s been murdered at the British Museum.

The police question Carter but other than his chance running into Greg, he can’t shed any light on who’d want to kill Gregory Semple.

In three months of living in London, Carter has settled into his role as house-husband and caretaker of their adopted son, Gabriel. But just to make sure his life continues to be interesting, his wife insists that he should apprentice as antiquarian bookseller and mind the shop for the owner, Louise, who is also their host for the duration of their stay in England. A few days later Carter receives a package with a mysterious black-hand-imprinted parchment, addressed to him, from his now-deceased friend. Impulsively and thinking it a joke, Carter measures his own palm against the black imprint and suddenly, unknown to him, a clock somewhere started ticking a countdown to doomsday.

As Carter attempts to figure out the importance of the strange parchment, he is thrust into a truth-is-stranger-than-fiction mess involving a billionaire’s child bride and European supermodel, a Scotland Yard Inspector, an eccentric academic, various thugs and his deceased friend’s adopted child. From the streets of London to the coast of Spain, Carter and Stella must find a way to abolish a ‘curse-disguised-as-a-gift’ that no one believed existed – until now. This time, it’s Carter’s life that is on the line because, as Stella puts it to him succinctly, 99% of humanity on Earth would kill to possess that which Carter now has — as a result of the curse and his impulsive nature.