The Night Is Filled With Beasts

In Eight in the Chamber, a cadre of your favorite authors have banded together to bring you all the thrills of the urban supernatural, with a twist of sci-fi noir, in a collection of full length novels, spellbinding novellas, and enough short stories to choke a bag of holding. Buy your copy today, and let them take you on a thrill ride through the dark that you won’t forget! 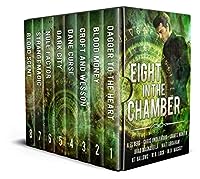 Orcs, vampires, rogue mages, and strange familiars… The night’s filled with beasts looking for kicks, who trod the urban landscape with cloven hoof or sharpened claw, keeping a yellow eye out for easy prey. But what’s a citizen to do when dark shadows lie heavy, spells become useless, and wands lose their charm?

They call on the heroes of Eight in the Chamber.

These hardboiled cops and investigators specialize in a preternatural kind of justice. They aren’t afraid to delve into dark magic or wield a cursed instrument to save the pure and innocent. They won’t quit until every dark deed is punished, and the scales of justice are balanced.

Dagger to the Heart
Novella
By Alex P. Berg
Detective Jake Daggers prefers his barbecue blackened, but with a serial arsonist on the loose, it’s the city’s murder victims coming in crispy. With the body count rising and fires burning across town, will the case get too hot to handle? Find out in this heart-wrenching prequel to the Daggers & Steele series.

Blood Money
Short Story
By Chris Underwood
Folk wizard Ozzy Turner can track down anyone, but when he’s hired to return a missing bloodslave to her vampire mistress, the question is not whether he can, but whether he should.

Croft & Wesson
Novel
By Brad Magnarella
Assigned to a dusty mining town, spell-casters Prof Croft and James Wesson must navigate a gritty landscape of witch madams, dwarf developers, and drug-dealing werewolves to stop a ritualistic killer – if the two don’t kill each other first.

Dane Curse
Novel
By Matt Abraham
In this classic mix of golden age derring-do and noir pulp, the world’s greatest superhero is mysteriously murdered, and only a former villain turned PI can find the killer in time.

Dark City
Novel
By Kit Hallows
Black Magic. Ritual Murders. Ancient Secrets. Welcome to the Dark City.
Occult Detective Morgan Rook has one job; ridding the streets of supernatural criminals. A job he promised to quit before it finished him for good. That was until a new wave of ritualistic killings started, one that threatens to bring the entire city crashing down around him. As the clock ticks toward midnight Morgan finds himself racing to face the shadows from his past in order to save the future.

The Null Factor
Novel
By W.H. Lock
All Private Detective Jack Story had to do was follow the wife of former superhero Sheldon Kane for a few days. It was exactly the kind of open and shut case they say never comes along. Easy money. Until the building she walked into exploded, and people she knows meet with suspiciously unfortunate circumstances. With the bodies stacking up fast, Jack needs to find the killer before they strike again. That’s if the cops don’t pin murder charges on Jack first.
Sometimes being a detective in a city of heroes can be Hell.

Strange Magic
Novel
By James A. Hunter
Part bluesman, part rambling gambler, Yancy Lazarus is the kind of man who’s smart enough to keep his magic under his hat. But when he looks into a mysterious murder on the streets of LA, he’s set up to a take a long fall, and the only way out is through two warring gangs, a hidden dark mage with mad magic chops, and a small army of hyena-faced, body-snatching baddies.

Blood Scent
Novella
By M.D. Massey
A rogue vampire is killing the weak and defenseless, and to end the slaughter Colin McCool has agreed to take up his sword one last time… but will this “one final job” be the death of him?