The End Time Saga by Daniel Greene is an unique series because it features multiple points of view of the zombie virus outbreak across the world…including elite counterterrorism agents trying to rescue a besieged doctor in the US Embassy Kinshasa, Red Cross workers, African warlords, military units and more. The characters are complex,  and not black and white. No “Mary Sues” or “Rambos”, only hard fought wins and tragic defeats. Enjoy! 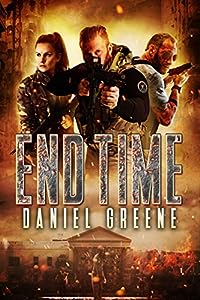 In the dark primal jungles of the Congo River basin, something is ravaging the local population. That was only the beginning. When protests turn violent in front of the US Embassy Kinshasa, only the foreign policy experts paid attention. As civil war erupts and people rip each other apart in the streets of the African capital, a disinterested public across the globe turns the channel.

In an effort to avert disaster and preserve its self-image, an overwhelmed US Department of State dispatches a team of elite counterterrorist agents to bring their besieged people back alive.

Agent Mark Steele, a rising star within the Division, and his team of gritty operatives are used to trudging through the worst dregs that society has to offer, all while operating from the shadows. But Steele’s team is wading headfirst into a maelstrom of death so much worse than rebels in the streets.

A highly contagious microbe is spreading unchecked through the streets killing everyone in its wake only to bring them back again as the ravenous undead. Only a lone CDC virologist understands the extent of the outbreak at hand. He cowers amongst the embassy staff praying for extraction from the hands of death, fearing his part to play in the epidemic.

Follow this harrowing tale of survival, duty, love and horror as the living dead bring the world to its knees. 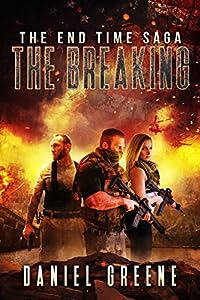 The Breaking (The End Time Saga Book 2)
by Daniel Greene

The dead have been ravaging the planet for months. Both the East and the West coasts of the United States have collapsed and the U.S. military is in full retreat. All their attempts to stem the tide of the dead have failed.

Former Counterterrorism Agent Mark Steele and his fellow survivors have been bushwhacked in the West Virginia hills. The fringe West Virginians are teaching him a valuable lesson in the new rules of the apocalypse. The mountain folk are as resilient as they are ruthless and Steele must find a way out to save his people.

In a desperate gamble to stop the virus, retired Air Force Colonel Michael Kinnick has been entrusted with finding Dr. Joseph Jackowski who’s gone missing in West Virginia. Kinnick’s depleted unit of Special Forces soldiers are to the breaking point as the dead assault them at every step.

Outside of Pittsburgh, Dr. Joseph Jackowski’s quest to find Patient Zero has stalled. Unwillingly conscripted into the National Guard, he has been enlisted into Colonel Jackson’s rapidly depleting force. As the military quarantine disintegrates around Pittsburgh, death marches closer, and time is running out.

In this thrilling sequel to End Time, Daniel Greene continues his fast paced and gripping apocalyptic saga. The Breaking, transports us to a near future composed of death, honor, destruction and hope as the United States falls and lives crumble before a devastating zombie virus.