NO HONEY FOR YOU!

My Christmas list of those who will get honey from our very own colonies this year is very small. Small like the jars of honey the people who are going to get honey this year. For our first year a gollon is a pretty good amount of honey, but we were hoping for just a little bit more. Maybe three or four gallons. Okay.. maybe we were hoping for a lot more. I think next year, when we harvest honey from three hives, we are going to be thrilled with the amount. I hope so. We have put a lot of blood, sweat, and tears from my partner in crime into this. WE WANT HONEY! We do have plenty of wax though, so we have plenty to make lotion, lip balm, and candles. Next year will be our year. 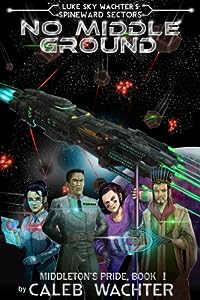 No Middle Ground is Book One of Eight in the ongoing Middleton’s Pride military space opera series, set in the 22-books-and-counting Spineward Sectors universe written by the Wachter brothers, Luke Sky and Caleb.

When the Empire abandoned the Spineward Sectors to their own devices, it was left to an underappreciated few like lifelong military man Tyrone ‘Tim’ Middleton and his crew of misfits aboard the aged Pride of Prometheus to keep their corner of the galaxy safe from forces which would tear it apart.

This action-packed, character-driven space opera series is full of ship battles, space marine slugfests, interstellar politics, and at twenty two total books already written in the universe–including eight in this particular sub-series–this team of author brothers is just getting started on this epic saga. 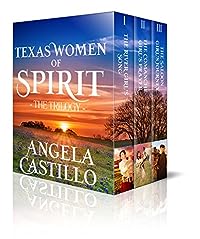 The Texas Women of Spirit Trilogy
by Angela Castillo

Book 1: The River Girl’s Song
Zillia Bright never dreamed she’d be orphaned at sixteen and left to care for her baby brother and Papa’s farm. With only a mule and a hundred year old shotgun , she must fight to protect what’s hers. Countless dangers lurk on the Bastrop, Texas riverside. Zillia must rely on the help of her best friends, Soonie and Wylder, to hold her world together. With Zillia’s struggles come unexpected miracles, and proof that God might just listen to the prayers of a river girl.

Book 2: The Comanche Girl’s Prayer
It’s 1890. Called by God, nineteen-year-old Soonie Eckhart travels to an illegal Comanche and Kiowa settlement in North Texas to become a teacher for the children in hiding.
Despite her Comanche roots, she finds many in the group, including a volatile young man named Lone Warrior, refuse to accept her.
After a chance encounter in the hills with a band of dangerous men, Soonie must draw on the deepest parts of her faith and courage to survive.

Book 3: The Saloon Girl’s Journey
Weary of the saloon girl life — and tired of being slapped around — Darla North decides to start over and let her new-found faith lead her. A friend sends her to Downs House, a place for ‘unfortunate women.’ Darla is offered a home — if she can behave herself.
Old habits are hard to break, but Darla is desperate to prove to everyone that she’s changed, especially Ethan Downs, the owner’s sensitive and sweet son. But when Darla’s past threatens to catch up with her, she must decide to face the truth… or run away again. 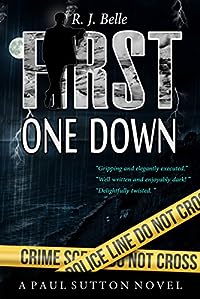 FIRST ONE DOWN: A Paul Sutton Novel
by Multiple Authors

Cold Case Detective Paul Sutton has dedicated his life to evil.
Finding it. Ending it. To bringing justice to the dead and answers to the living. His life is spent straddling the line between the light of truth and the darkness of man’s blackest sins. The Detective Paul Sutton series begins with First One Down when Sutton is given a second chance to solve the case that’s haunted him for two years.

Behind the mask of light lay darkness…

It took San Diego Detective Paul Sutton exactly eleven days to realize retirement would not work for him. Back on the job as a Cold Case Detective, Sutton has the chance to delve deeper into the only case of his career he’d been unable to solve. A woman’s tortured body had been abandoned on a beach. Her tormented husband has never stopped grieving. And a missing woman may hold the key to unlocking a deadly puzzle.

How does a girl who has everything going for her find herself in such a mess? Driven in her career, but careless in love, Kali Hanson is in thrall to the one man who can fulfill the dark desires within her. But after an act of ultimate betrayal, she finds herself tangled in a web of deceit, where a charming mask can conceal a monstrous soul, and the brightest light is in danger of being extinguished in the depths of darkness.

As boundaries blur and the difference between truth and lies becomes indistinguishable, Detective Sutton finds himself in a race against a ticking clock. Only one thing is certain: if Sutton doesn’t stop him, the monster will keep on killing, and another innocent woman will be lost forever to his darkness. But Sutton is not about to let evil win this time.

Notice: This mystery-thriller is for Mature Audiences due to moderately graphic sexual scenes, violence, and adult language. 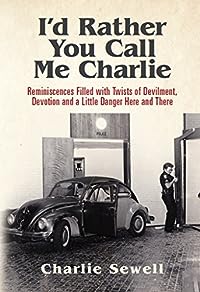 I’d rather you call me Charlie: Reminiscences filled with twists of devilment, devotion and a little danger here and there
by Charlie Sewell

I’d rather you call me Charlie spans sixty-five years of reminiscences replete with the dreams of a five-year-old that came to life with humor, mischief, and some degree of peril growing into my teenage years.

Life in the South enabled me to engage in antics and adventures that would prepare me for an amazing and thrilling journey into adulthood.

Learn about real life events in the 1950’s and 1960’s in Alabama and Georgia including my surprising and poignant forty-two-year law enforcement career.

You’ll feel like you’re there witnessing many natural deaths and fatalities that came too often. Each one was hard, and each one will confiscate a little part of your heart.

Come face to face with suppressed memories and how they can hurt deeply.

Can a police officer run through the sewers of life and not come out smelling rotten, or pursue fiends without becoming one? Be captivated and witness the dream unfold. 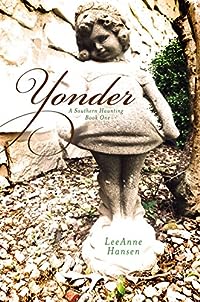 Summoned by the news of her dying father, Isabel Delilah Jones escapes from New York City, broken hearted and disillusioned, back to her small Mississippi town. She is welcomed smack dab into a bizarre inheritance, a complex war for her affection between two former best friends, a dire haunting from an unknown child, and a deadly mystery that only she can solve. Yonder is the perfect Southern treat for fans of tangled romance, spooky mysteries and down home cooking. Taking place in the 1940’s on the cusp of World War II, Yonder promises a lovely glimpse of an era that was all too short.