Mystery, thrills, twists, and laughs, this collection by author Alan Hardy is shocking, original and respectful of nothing and nobody. Hardy certainly seems to have created his own unique genre that readers are falling in love with. Enjoy! 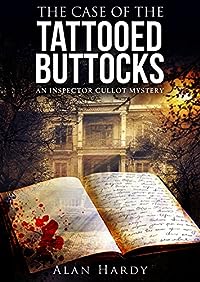 Following the murder of a sexy, blonde bombshell (and, soon after, the bloody, gruesome, shocking murder of yet another sexy broad), ex-Inspector Cullot is called in to team up with his old side-kick, Detective Sergeant Watkins, to investigate the baffling crime. Together they set about solving the mysterious deaths at Bounderdales, the opulent mansion of the oil magnate, Henry Barble. A small group of the rich, decadent, sophisticated and ultra-sexy are staying at the mansion. What secrets are each of them harbouring? Who are the guilty parties? And what is the dark secret from his own past which causes Cullot’s frequent moments of dark despair? Why did he leave the Police Force? Did he jump, or was he pushed? Why does he now work in a department store, in Ladies Underwear? The police constable first on the scene of the initial murder, PC Blunt, is ready to record every detail of the case, and assist his colleagues in their work. But what is his own past..? Is he as half-witted as he seems? What about gorgeous, sexy blonde bombshells, Stephanie and Gloria? And louche, limp-wristed Anthony Newhome? And Barble’s son, Oswald? And Barble’s demure, bespectacled secretary, Abigail? And ex-movie star, Janice Butler? Are they all who they say they are, or are some of them involved in a deadly game of murder and revenge? How are these murders linked to the unsolved Night-Club Hostess Murders which took place two years earlier? And, most puzzling of all, what is the meaning of the tattoos on the gorgeous buttocks of the assembled ladies?

Thrill to the suspense, the heart-ache, the twists and turns, the laugh-a-minute of this hilarious, baffling mystery. Get ready to follow the roller-coaster plot, with one surprise after surprise, and scintillating word-play and sparkling dialogue between the marvellous host of characters. Will you be able to work out who did it? A detective/murder mystery like no other… 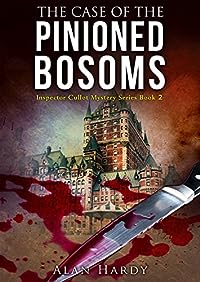 After staying in the Swiss Alps for barely two days, Inspector Cullot knows there are going to be two murders committed at his hotel. He also knows there is only one man who can prevent there being even more… That man is Inspector Cullot himself. So begins another Inspector Cullot Mystery… Cullot, together with his gorgeous, sexy daughter, Stephanie, his faithful side-kick, Detective Sergeant Watkins, and the bumbling, note-taking PC Blunt, put their holiday on hold and set off in pursuit of the killer, in one of the most baffling cases of Cullot’s illustrious career. Who are the two naked victims pinioned to their beds by knives thrust through their bosoms? Who’s the callous killer who’s carried out such hideous, gruesome murders? We meet an array of characters: the still stunningly attractive Madame Laporte (whose charms have an immediate effect upon Cullot himself); the suave, ripplingly-muscled Herr Randimann (whose charms Stephanie is currently sampling); the brazen little minx, Veronique, Madame Laporte’s daughter; the Italian ice-cream salesman, Signor Delitto, with a constantly twinkling eye for the ladies; the secretive Herr Geschlecht, and his sour-faced wife; and other characters, with their unexpected entrances and exits. Which one of them is hiding his (or her) real identity? Who harbors dark secrets from the past, and a burning, uncontrollable desire for revenge? What nefarious deeds have been taking place over recent years at this seemingly respectable hotel? What are the links between the victims and the guests which Cullot and his squad must unearth? Are there even unsavoury connections between the victims and members of Cullot’s team itself? Who is involved, and who isn’t? Will you be able to spot the killer?

Amidst the sparkling repartee, non-stop thrills and series of startling revelations, will you be able to discard the red herrings and fasten on to the important clues? Will you be completely baffled, like the mentally-challenged PC Blunt, or exhibit the incisive skills and investigative acumen of Cullot himself, maybe the greatest detective the world has ever known? There’s only one way to find out… 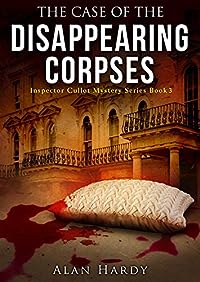 Another puzzling, fiendishly complicated mystery for Inspector Cullot and his world-famous Team to solve… Can the Inspector, together with Sergeant Watkins and Cullot’s gorgeous daughter Stephanie, solve the mystery of the corpse that disappeared? Such a mind-boggling mystery is soon followed by a whole series of disappearing corpses being reported all over London… And, worst of all, is the fourth member of Scotland Yard’s top-notch Team, namely the bumbling, bemused PC Blunt, the actual murderer? Is the love of Cullot’s life, the still stunningly attractive ex-movie star Joan Butler, somehow involved? And what’s the role, if any, of Lord Fotheringay, Stephanie’s latest lover, in the whole affair? Cullot and his elite Murder Squad embark on one of the most baffling cases they have ever met in their pursuit of a horde of suspects, clues and disappearing corpses across London, leading them into direct confrontation with one of the most ruthless gangs the world has ever known, as well as a collection of the sexiest and most jaw-droppingly appealing women imaginable, and the swankiest, most fashionable habitations in the land… until a bloody and violent finale in a luxury country house… Oh, and of course… as always, the chase is accompanied by the wit and sparkling repartee the world’s greatest detective and subordinates bring to all their cases. And what about Sergeant Watkins’s red-hot love for Stephanie, Cullot’s beautiful and outrageously provocative daughter? Will there be a successful conclusion to his tormented passion?

Read on, if you can take the thrills, the twists, the laughs and the inimitable panache of yet another case in the breath-taking annals of the world’s most famous detective. 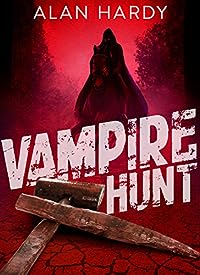 A VAMPIRE STORY LIKE NO OTHER…
It is 1914. Dr Joseph Aymon returns to his youthful haunts in Transylvania where he used to accompany the famous vampire-killer, Professor Van Helting, on his vampire hunts. In a world fast throwing off the superstitious clutches of medieval terrors and mythical monsters, Joseph is on a personal quest to prove the existence of vampires. The new sciences, with their cold exploration of the demons which lurk in the recesses of the mind, have mercilessly dismissed the old certainties of evil and purity which Joseph and his master still cling to. Joseph is eager to re-habilitate his and the Professor’s reputation. He can’t wait to come face-to-face with the Undead, and prove all his detractors wrong. It is also his aim to discover the whereabouts of Bella, his first and only love, who vanished years ago, in mysterious circumstances… His quest brings him into contact with a host of characters: the daunting, chilling figure of Count Drace; his voluptuous wife, the Countess; her thin-lipped, haughty and depraved niece, Grimelda; the enigmatic, beguiling figure of the Mother Superior of the local convent; Thomas, the man-servant harbouring a shocking secret… Will Joseph find what he’s looking for, and, if he does, will that discovery bring him release, justification, more derision, or plain, unadulterated horror? A vampire story like no other… 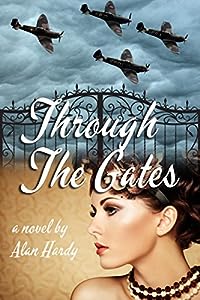 Through The Gates
by Alan Hardy

MARK TRAVELS BACK IN TIME IN SEARCH OF A BEAUTIFUL, BLACK-HAIRED WOMAN… AND GOLD BULLION… AND THE MYSTERIES OF LIFE…

A time-travel novel like no other time-travel novel you’ve ever read! Mark discovers secret upon secret in his mysterious garden, and finds himself slowly but surely drawn back into the days of the Second World War, with its life and death struggle and sense of constant danger and excitement. He is pulled further and further back into the folds and sleeves of time, and becomes intricately involved in the outcome of the war. Does it even fall on him to decide the course of history? Can he change the past? Can he obliterate, or save whole worlds? Is there buried gold bullion to be unearthed in his garden? What is the role of the ageing vamp, Emma, who enters his life? And Mary, his ex-wife, who re-enters his life at the same time? And, most poignantly of all, who is the beautiful, young woman he remembers meeting so many years ago at infant school who spoke to him of a time they would meet again? Mark has never been able to forget her, and sets out on a perilous voyage back in time to find her.