I am just going to put it out there and say I might be one of those crazy moms. Last night my youngest basset was tried out a new wrestling class for the first time. My hubby was a pretty big deal back in his high school days when he was on the wrestling team. He crushed his opponents on a regular basis. He was a BEAST! So when a new wrestling class came up for young kids I jumped on the opportunity to put my little champion on the mat. OBVIOUSLY he will be awesome at it. He seemed to be enjoying the class and was doing pretty good. He got paired up with another kid that was a sweet partner that was paying attention and doing pretty good. It was great. I can’t say the same for a lot of the other kids though. I felt a bit bad for the coach because a lot of the kids were acting crazy and flopping all over the place goofing around. They were acting like…. KIDS! My hubby was watching the class with a big smile on his face. I couldn’t believe it. How was my kid going to go to state if the other kids weren’t paying attention and being a distraction? I thought it was usually the dads that lived through their kids. Nope, it was me. He had to remind me that these were seven year olds and they were acting like seven year olds. Yes yes yes. In the meantime I was memorizing the moves so we could practice at home. We’re going to state! 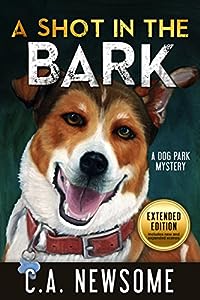 A grieving artist, a smitten detective, a devious killer: You never know who you’ll meet at the dog park.
Would you recognize a killer if you talked to one every day? Artist Lia Anderson doesn’t. Neither do her friends at the Mount Airy Dog Park. When the apparent suicide of Lia’s deadbeat boyfriend draws the attention of Detective Peter Dourson, he decides to adopt the dead man’s dog to infiltrate the tight group he’s certain conceals Luthor Morrissey’s killer. As his investigation uncovers secrets, a grieving Lia fights her growing attraction to the laid-back detective. Meanwhile, Luthor’s killer lurks, desperate to stay ahead of the investigation — no matter who has to die…

If you like believable characters, a multi-layered plot, and a compelling sense of humor with your intrigue, pick up this can’t-put-down whodunit for a romp through the dog park with Lia and the gang. 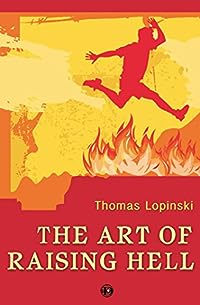 The Art of Raising Hell
by Thomas Lopinski

“There are some people that walk around on two feet and others like me that run on all four.”

To most people, that’s a bold statement. I just wish I’d been the one to say it, but I wasn’t. In fact, until a few days ago, I wasn’t even sure what it meant.

Either you’re the type of person who lives within a set of boundaries or the type who knows none.

But life is never that simple, is it?

No, I’d say that the most important insights about who we are, what we say, and why we do things are not always the obvious ones. Instead, they’re discovered on the streets of your hometown, revealed late at night in a dark backroom, or sometimes forced upon you at knifepoint where your only choices for survival are between bad and worse.

In The Art of Raising Hell, Newbie Johnson has recently moved to Bunsen Creek, Illinois, when his mother is killed in a tragic car crash. His father does his best to maintain a normal household, but his broken heart is just not up to the task.

Newbie finds solace by hanging out with his three buddies in their clandestine Backroom hideout. Getting into mischief becomes their favorite pastime as they try to follow in the footsteps of Lonny Nack, who has perfected the art of running on all four.

Lonny fears no one, including The Law, and soon takes his peculiar sense of justice, along with his love of practical jokes, to new heights while entertaining the colorful characters of Kickapoo County.

“Running on all four” takes on a new meaning for Newbie when he finds his inner voice and begins to understand the difference between chasing life and being chased by it. 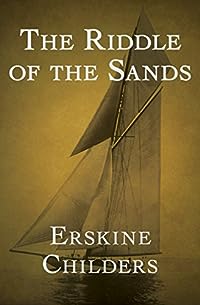 The Riddle of the Sands
by Erskine Childers

In the rough waters of the North Sea, two sailors fight to save Britain

Charles Carruthers is languishing in the crushing heat of a London summer when an old university chum named Davies throws him a lifeline, inviting him on a yachting expedition in the North Sea. It sounds like a lark, but Carruthers finds that the Dulcibella is hardly a yacht, and Davies’s trip is no pleasure cruise. Off the coast of the mysterious Frisian Islands, he has spotted a German fleet, supposedly engaged in hunting for buried treasure. Battling the elements, the two Englishmen find themselves surrounded by the German navy, which is using the fogs of the North Sea to disguise something monstrous — the Kaiser’s plot to launch a sneak attack on the British Isles.

Published more than a decade before World War I began, this groundbreaking spy novel inspired a young Winston Churchill to reinvigorate Britain’s naval defenses, and it remains just as stirring today. 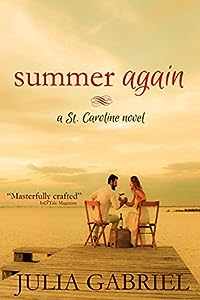 A wealthy heir called home by family duty…
The town of St. Caroline had never felt like home to Sterling Matthew. Even though the Matthew family could date their residence back nearly a hundred years, Sterling had grown up in boarding schools — and promptly decamped for the ski slopes of Europe after college.

When his father falls ill, his mother calls him home to run the family business, the renowned Chesapeake Inn. What Sterling finds, though, is a business on shaky financial footing and a staff resistant to the radical changes he has to make. No matter. He’ll do what needs to be done… and then leave St. Caroline for good.

A woman who’s pulled herself up by the bootstraps…
For years, Lucy Wyndham wondered whether she’d ever catch another glimpse of the boy she’d crushed on at the Chesapeake Inn’s summer camp for disadvantaged kids. He’d been tall and quiet. Mysterious and aloof. And the owner’s son. Now he’s her boss and the attraction is just as strong — but they’re no more compatible today than they were as teenagers. When he informs her that the camp must be eliminated to improve the resort’s bottom line, she embarks on an ambitious campaign to save it. Even if the price is her job… and her heart. 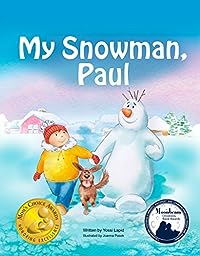 When Dan meets a snowman named Paul, they become fast friends in an adventure-filled winter wonderland! A charming picture book featuring rhymes your little one will love.

This is the first volume in the Snowman Paul award-winning picture book series. It tells the story of how Dan and Paul first meet and become best friends. The story encourages us to listen to the little voice inside us and not to worry too much about what others might think about our whims and dreams.

“I was amazed by what I heard,

I couldn’t say another word,

I patched together head and all

Fast paced and stunningly illustrated by Joanna Pasek, this rhyming picture book series carries great messages for kids – don’t cheat, apologize when you do wrong, make up for your mistakes, don’t allow bullies to intimidate you, love nature, be respectful of others and, above all, pursue your dreams and don’t be easily discouraged.

The lessons embedded in Snowman Paul’s adventures can be enjoyed by any age, but preschool and kindergarten children will especially love them. They are perfect for both cold winter days and warm summer times. They are great bedtime stories and ideal for beginner readers. They make beautiful gifts and they will show you how much fun winters can be if you let loose your imagination.