Points For The Couch

My brain and my body do not seem to be in agreement with each other. My brain has a long list of things that I want to do, including cleaning up the garden a little bit and preparing it for the new crops I have in mind, as well as finishing up clearing the Christmas decorations that I started to do before I was hit with the flu. My body has other plans. It will let me get down the hall, but after that it makes me weak and sends me to the couch. Normally I love the couch, but I got stuff to do. I thought I was over the flu! Nope, now I have to recover from having the flu. I was out of breath after I made coffee. That’s just not right. I already wasted a week of my life being sick. The up side to all of this is I saved money the week I was sick. I didn’t go to Target or Costco once, and that right there is about a billion dollars. I get credit for that right? As my reward I should go to Target. 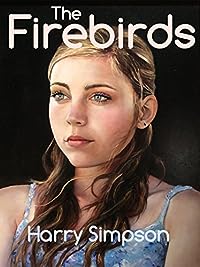 The Firebirds
by Harry Simpson

It’s the last day of school and seven children are being told a story by a substitute teacher when they fall asleep as though a spell has been cast over them. They awaken to discover that clones have been sent home in their place while they’re trapped in school by an invisible bubble. Worse, it’s now the FIRST day of school. At least their dormitory is decorated with art treasures, their windows open to historical cities like Venice and Byzantium, they have lovely stroll around gardens, and food and delicious desserts appear like magic. Their living copies must know what’s going on, but they’re not saying much. Is it a clever alien invasion where children are being gradually cloned and replaced? Why does their principal look like a witch? Should they try to escape their gilded cage? Why bother to do homework if you can eat cupcakes and watch 3-D cartoons all day? Besides thrills, laughs, and adventures, there’s a bit of first romance, clueless adults, a peregrine falcon, a mysterious substitute teacher, two ghosts from the Titanic, and kids with amazing talents. Oh yeah… there’s also a giant asteroid on a collision course with earth. As their substitute teacher says, every story has a problem. 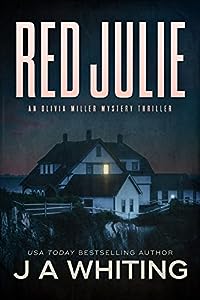 This is Book 2 in the Olivia Miller Mystery series. Olivia was raised by her aunt Aggie from the time she was a year old. Several weeks before Olivia graduates from college, Aggie dies suddenly and unexpectedly, riding a bicycle at night near her home in Ogunquit, Maine. The death certificate lists the cause of death as a massive heart attack, but Olivia doesn’t believe it.
Soon after her graduation, Olivia is on the highway, late at night, heading home to Ogunquit when she comes upon an accident. A man is on his back, in the middle of the road, his legs caught in the wreckage of his overturned Mercedes. He grabs at Olivia’s jacket and frantically mumbles to her something that sounds like, ‘red Julie’. The man dies at the scene, but not before he slips something into Olivia’s jacket pocket. Will Olivia figure out what ‘red Julie’ means and how her aunt really died that night before it is too late? 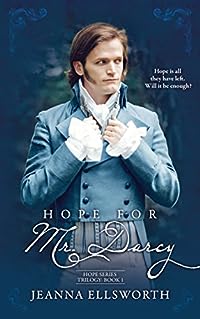 Still shaken from his horrible proposal, Elizabeth Bennet falls ill at the Rosings Parsonage upon reading Fitzwilliam Darcy’s letter. In her increasingly delirious state, unfathomable influences inspire her to write an impulsive response. The letter gives Mr. Darcy hope in a way that nothing else could.

As her illness progresses, Darcy is there at her side, crossing boundaries he has never crossed, declaring things he has never declared. A unique experience bridges them over their earlier misunderstandings, and they start to work out their differences. That is, until Elizabeth begins to recover.

Suddenly, Elizabeth is left alone to wonder what exactly occurred between the two of them in her dreamlike state. And for the first time since meeting the man from Pemberley, she finds herself hoping for Mr. Darcy to return and rekindle what once was.

Hope for Mr. Darcy is the first volume of the Hope Series Trilogy, a Regency variation series based on Jane Austen’s Pride and Prejudice. This trilogy promises hope will always light our way through the darkness of unrequited love, but eventually bringing tremendously gratifying outcomes for our three favorite characters: Mr. Darcy, Colonel Fitzwilliam, and Georgiana Darcy. 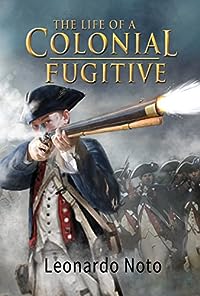 The Life of a Colonial Fugitive
by Leonardo Noto

What do you do when your commanding officer frames you to conceal his wartime atrocities, when you’re facing the gallows for a crime that you didn’t commit? You run.

Jonathan E. Lee was the idealistic youngest son of an eminent Virginian plantation clan until he made the mistake of following his dashing older brother, “Light Horse Harry” Lee, into the nascent Continental Army. Now standing falsely accused of capital crimes, Jonathan is on the run, fleeing The Colonies for British Canada to save his neck from the hangman’s noose. But little does Jonathan know that this is only the first brush with a violent death that he will face in the bitter years to come.

Based in the late 18th and early 19th centuries, “The Life of a Colonial Fugitive” is a fictional, but historically accurate, tale of the globetrotting adventures of Jonathan E. Lee, a member of the esteemed Lee Family of Old Virginia. Follow Jonathan through the upheavals of the American Revolution, in a fratricidal struggle for independence as he fights alongside the militia of the sovereign Republic of Vermont, in a treacherous civil war as a soldier of fortune in the Kingdom of Siam, and finally as a mercenary in America’s first foreign war, fighting valiantly against the hated Barbary Pirates of Mediterranean. Settle in to your saddle and grasp the reins, because you’re in for a galloping ride! 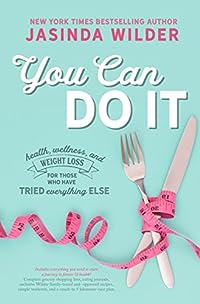 You Can Do It: Health, wellness, and weight loss for those who have tried everything else
by Jasinda Wilder

From New York Times bestselling author Jasinda Wilder comes YOU CAN DO IT, a straightforward guide to lifelong health and wellness. No gimmicks, no counting, no measuring, just practical advice on how to eat better, get moving, and live well, delivered with refreshing honesty and humor.

Do you want to start a journey to health and strength, but are afraid of failing yet another diet or exercise program?

Have you ever struggled with your weight? Do you have problems losing weight and keeping it off? Do you have allergies, ADHD, PCOS, diabetes, constipation, skin problems, or insomnia? Are you worried about your kids developing unhealthy eating habits and making poor lifestyle choices, but don’t know how to help them make changes? Do you want to eat healthier and be stronger, but just don’t know where to start? Using her own unique life experiences, Jasinda has developed an 8-week jump-start plan, The Wilder Way, that will get you eating, moving, living well, and feeling great.

YOU CAN DO IT contains everything you need to succeed in achieving your goals and become a fit and fabulous health warrior: tear-out shopping lists, easy menu plans, delicious recipes, and simple, effective workouts. If you find yourself struggling and failing to manage your weight, then read this book — it will change your life!