This collection by A.D. Davies is an intriguing mix of police procedural, mystery and serial killer thrillers, that will tease, involve and unnerve you. These fast-paced thrillers will not disappoint. Enjoy!

The Dead and the Missing (Adam Park Thriller Book 1)
by A. D. Davies

A brutal international underworld. A lost girl. A PI determined to burn it all.
Former private investigator Adam Park got rich and retired in his mid-30s, living a quiet life of surfing and travel. But when a troubled young woman and her manipulative boyfriend disappear, Adam’s old mentor cuts that retirement short. Using cutting-edge technology, Adam soon learns both abuser and victim made an enemy of a seemingly small-time gangster, and tracks them from the UK, through the Parisian underworld, and into an international organized crime network that treats human life like a business commodity. To confront criminals on the rise, ruthless traffickers, and corrupt policemen, he must burn down his concepts of right and wrong, and draw upon the darkest corners of his psyche. But these are facets of himself Adam has long denied exist. Bubbling just beneath the surface, he has kept that anger and violence caged all his life. Because he is a good person. Isn’t he? The Dead and the Missing is a suspense filled, often violent, international mystery & crime thriller, a journey that launches a PI from the relative safety of the corporate world to the hard-boiled existence required to get the job done. At any cost to his soul. To discover a new world of mystery and crime, pick up the first book in the Adam Park detective series today. 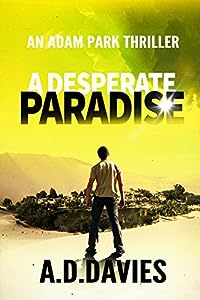 A dead aid worker. An island rife with secrets. A detective driven to solve it all.
With a damaging, violent case behind him, Adam Park is happy tending to his late mother’s canal barge, catching up on his reading, and hoping his increased training is never required. Unfortunately, he owes favors, and when an aid worker is murdered on the Greek island of Paramatra, one such favor is called in. Kai Pace’s parents believe the investigation into their son’s death is deeply flawed, and Adam is tasked with reviewing the police’s conclusions and – if found wanting – identifying the real killer. With the island struggling to cope with an influx of refugees, Adam must battle corruption and ruthless smuggling gangs, all amid people so desperate they will do anything to reach the paradise of the west. Plunging a private detective from the heart of Greece into northern Africa, fear and violence will take their toll upon him, and challenge the very nature of his soul. If he cannot stay the course and dig out the truth, a murderer will go free, and Adam will fall prey to the same evil.
For a fast-paced thriller with plenty of action, pick up your copy of A Desperate Paradise today.

His First His Second (An Alicia Friend Investigation Book 1)
by A. D. Davies

Meet Detective Sergeant Alicia Friend. She’s nice. Too nice to be a police officer, if she’s honest.
Now assigned to DI Donald Murphy’s team, the annoyingly-perky detective finds herself in the grip of a northern British winter, investigating the kidnap-murders of two young women – both strikingly similar in appearance. When a third is taken, they have less than a week to chip away the secrets of a high-society family, and uncover the killer’s objective. But Richard – the father of the latest victim – believes the police are not moving quickly enough, so launches a parallel investigation, utilising skills honed in a dark past that is about to catch up with him. As Richard’s secret actions hinder the police, Alicia remains in contact, and even starts to fall for his charms, forcing her into choices that will impact the rest of her life.
For a chilling serial killer thriller with a quirky main character, pick up His First His Second today! 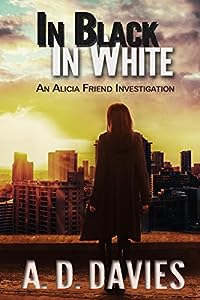 In Black In White (An Alicia Friend Investigation Book 2)
by A. D. Davies

Alicia knows she can be irritating to have around at first but, when given a chance, all her colleagues fall in love with her. She can’t explain it, but it’s how she works, how she gets her best results.

And it is exactly how she must work when a British diplomat is murdered on US soil, and the UK Ambassador orders her to observe the FBI’s investigation.

Soon, the murders expand to encompass a wider victim profile, each confessing their politically motivated lies on camera, and Alicia shows why her superiors overlook her quirks, and consider her one of the best minds in her field.

Drafting in her old partner, Alicia imposes her personality on the investigation, and shifts the focus from a politically charged arena to the madness of a psychopath who cannot seem to stop.

In Black In White is a fast paced serial killer thriller that reunites popular characters from the first Alicia Friend book, His First His Second, and introduces new ones to this very unusual British detective. 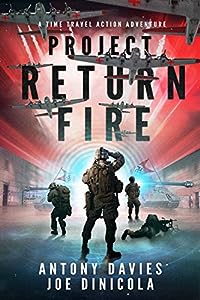 An inadvertent trip through time. A battle to decide the fate of mankind. One chance to set things right.
Deep in the Juras Mountains, Johnathan Santarelli’s team of Army Rangers investigates a radioactive anomaly. Suddenly, Santarelli and his men are transported back to 1945 in German-occupied territory. Far from their loved ones, the Rangers want nothing more than to preserve the timeline and get home. But when an elite German deployment captures future technology, and the Rangers are confronted with younger people from their present, the U.S. unit realizes it has a higher duty: stopping the Third Reich from turning the war in Germany’s favor. Before they return home, the team must battle the Nazis for the future of time itself. Project Return Fire is a military time travel action adventure novel set during World War II. If you like bloody battles, soldiers in action, combined with the shock of being ripped through time, then you’ll love this action-packed thrill ride.
Buy Project Return Fire to join the fight today!