With A Little Bit Of Luck

Author Derry Pitter has the wonderful ability of writing so that whether the story is about dragons or a Private investigator, it draws the reader in to become totally absorbed by the characters and story. Enjoy! 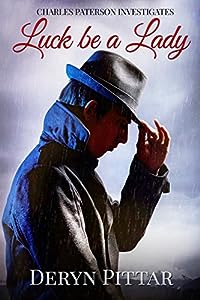 Luck be a Lady: Charles Paterson Investigates
by Deryn Pittar

Charles Paterson, Private Investigator, has crimes to solve, but he has an even bigger problem — he’s terrified to leave his house. A diagnosis of agoraphobia is a relief. It could have been something fatal. All he has to do now is overcome his fear?

He adopts a rescue dog, Lady, for company and forces himself back to work to locate a missing wife find a lost dog, and discover if a husband is cheating. Bread-and-butter crimes that keep him employed but is the ‘missing wife’ really a wife and has a murder been committed?

Vertigo attacks and terror do their best to stop his progress. His ex-wife has plans and is demanding money but with Lady’s support he just might win. 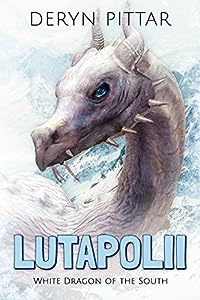 Dragons can’t swim and they can’t catch seals – but Lutapolii can.

Lutapolii, a puny white dragon, escapes to the south to avoid his mother’s mocking words. He learns to dive, swim and catch seals but winter creeps up on him and he finds himself stranded. With luck on his side he manages to survive, and returns home in the spring, stronger, taller and very handsome – for a dragon.

After discovering he has been declared dead by the dragon queen, Lutapolii considers this absolves him of all loyalty and decides to establish a flight of his own in the southern seas. All he needs is a handful of lady dragons. Can he steal them from the queen’s flight? He’s matured over the winter and totally magnificent, so why not take the risk?

With a bit of luck she won’t miss them, until it’s too late.

Read how Lutapolii sets about enticing four young dragonesses to join him. Follow his conflicts with the dragon queen and his mother. And discover how the need to feed his growing family requires him to take further risks.