USA Today Bestselling Author Jay Allen, takes you on an epic adventure you wont soon forget with the Crimson Worlds series. It gets off to a fast start with humans lost in space fighting a seemingly suicidal battle against an army of robots with superior technology. This is a story about the indomitable spirit, the intellectual ingenuity and the raw courage of humans when faced with seemingly overwhelming odds. Enjoy! 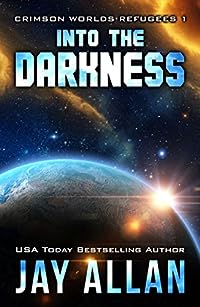 Into the Darkness (Crimson Worlds Refugees Book 1)
by Jay Allan

Terrence Compton is one of Earth’s greatest admirals, a warrior almost without equal. Alongside his oldest friend and brilliant colleague, Augustus Garret, he and his forces saved Earth from invasion by the robotic legions of the First Imperium’s insane computer Regent.

There is just one problem. The First Imperium was held back by the disruption of the sole warp gate connecting the two domains… and Compton and 300 of his ships are trapped on the wrong side, surrounded by the Regent’s vast fleets and cut off from Earth.

Pursued by their deadly enemy, Compton and his fleet must flee into the darkness of unexplored space, seeking safety… and ultimately a new home. Their journey will take them deep into the heart of the First Imperium, to the silent, windswept worlds where the ancient race that built the Regent once dwelled… and uncover the lost secrets of its disappearance 500,000 years ago. 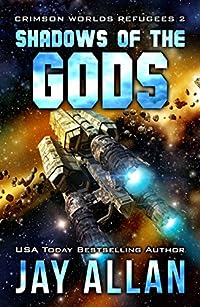 The Fleet Fights On…
Deeper. Farther into the black unknown of space. There is no other path, no way for the lost to go, save forward. Admiral Terrance Compton’s fleet is cut off from Earth, deep in the heart of the enemy First Imperium. A third of his people have died in the year his force had been fleeing from its enemies, but he is as determined as ever to find a new home for his people, a way to save his wartorn fleet

His people are running low on everything — food, ammunition, fuel, and the brutal enemy is in relentless pursuit, marshaling all its vast resources to track down and destroy the human refugees. Compton must find a way to replenish his dwindling stores, while avoiding the massive enemy forces hunting his fleet from system to system.

Compton seeks an escape, a refuge for his exhausted spacers from the relentless pursuit of their enemies. But they are about to find far more than that, as they discover the truth of the distant past, and a glimpse of a new future that lies before them. What they learn will shake all they believe… and force them to reconsider who they are. And what victory would look like.

The fight has just begun… and the stakes are even higher than any of them had imagined. 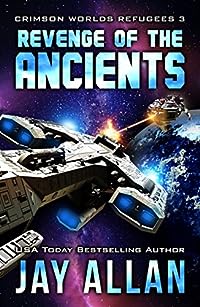 A battered group of human ships, fighting for survival, fleeing deeper into the far unknown, pursued by the deadly forces of the genocidal artificial intelligence known as the Regent.

A legendary commander, the man who has saved his people time and time again, struggling to lead the fleet ever forward, fighting through every attack the enemy throws at them.

A hidden world, a remote refuge prepared millennia ago, holding the promise of a new future, if the fleet can reach it… and hold it against the Regent’s relentless attacks.

Admiral Terrance Compton and his lost fleet battle their way forward, striving to reach the end of their great journey. They will fight, with all the strength and power than remains to them, standing firm, resolute against all the force the Regent hurls at them. But their destiny is no longer in their hands.

In the end, the fleet’s survival rests on the courage and strength of a tiny force of Marines and a desperate mission, one that will lead this group of warriors right through the enemy’s thickest defenses, to the very heart of the enemy’s domains, the ancient homeworld of the First Imperium… and the inner sanctum of the Regent itself.

The action packed conclusion to the Crimson Worlds Refugees series! 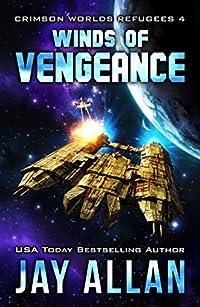 Earth Two. A new home for the survivors of the fleet, the men and women who battled against seemingly insurmountable odds to survive the assault of the First Imperium and to destroy the homicidal Regent, the artificial intelligence committed to their destruction.

They have prospered in the years since their arrival, adapting the technology of the First Imperium to build a new and prosperous republic. But as the fear of the First Imperium recedes, cracks have begun to appear, conflicts looming that threaten to destroy all they have worked to achieve.

There are rivalries between the clones known as “Tanks” and the “NBs,” naturally-born humans, disputes driven by envy, resentment. And on the fringe of the new society, the enhanced genetic hybrids known as “Mules” are feared by both groups, though they continue to decipher First Imperium technology for the benefit of all.

But there is a far greater threat lurking in deep space, for the Regent was one of two, and its copy activated automatically upon its destruction. It has been planning, exploring, building vast fleets of new warships, and now it is ready to strike at a divided republic, to accomplish what the Regent failed to do. It is ruthlessly single-minded, existing for a single purpose. And that purpose is vengeance.